The November 9 General Strike in Greece was the most attended and militant in many years! 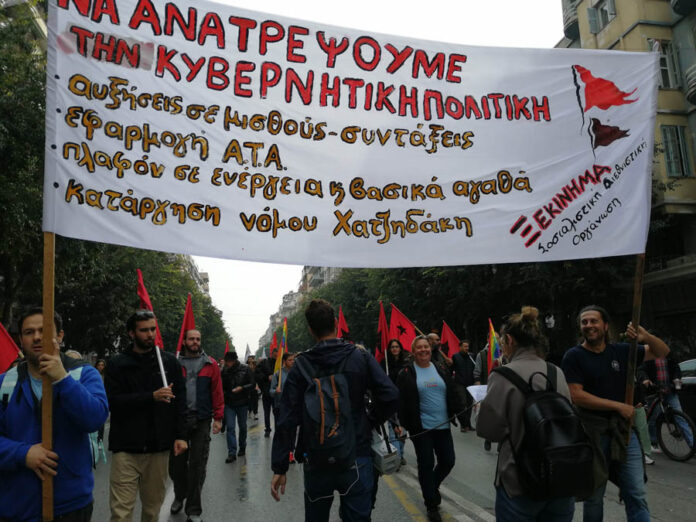 The General Strike of Wednesday, November 9, in Greece had a scent of the great militant traditions of the Greek movement. It was in no way reminiscent of the lifeless rallies of the recent years. Taking into account the recent history of the movement, it could only be compared to the big strikes and rallies during the memoranda era of the first half of the 2010s.

This is confirmed both by the mass participation in the demonstrations and by their militancy. The reason behind this change is the anger that has been building up in recent months and years.

The right-wing New Democracy government policies have stirred up anger in various fields:

Over the past days and weeks, it has become obvious in several discussions that the General Strike would be a great success.

Although no official figures have so far been given by the unions on the strike participation, the picture from many workplaces is that the participation was very high. Ships were tied up at ports, dozens of flights were cancelled or re-scheduled, public transport was paralysed, teachers at all levels were very massively involved, art performances were cancelled, taxis pulled the handbrake, while participation by workers in the media was total, including the pro-government media. The mass participation was also expressed in the strike rallies in Athens and other cities.

The police press release claims that a total of 16,000 people took to the streets in Athens. This is just ridiculous for anyone present at the demo but, on the other hand, it is no surprise that one of the main pillars of the Greek state machine publishes this kind of nonsense.

A picture was published on the Communist party youth website, showing over which streets the PAME (the CP union caucus) demo in Athens stretched to.

The total length of this route is about 2 kilometres, so the PAME demo was attended by at least around 15,000 people. The rallies and marches of the official trade unions (GSEE, ADEDY, EKA) were even larger, while some rank-and-file unions and parts of the extra-parliamentary left also held another big march. It is therefore realistic to say that the marches in Athens were between 40 and 50 thousand strong.

3 rallies were also called in Thessaloniki, amounting to a total of about 10,000 people.

It is worth mentioning that a strike picket line at the gate of the Malamatina wine factory in the industrial zone just outside Thessaloniki at 6.00 am was indeed successful: the police and the employers did not even try bringing the scabs at the factory!

Taking into account the great difficulty for people to get to the rallying points, because of the public transport strike, the success of the rallies and marches is proven to be even greater.

As Xekinima has stated before, the correct attitude by the Transport Unions during general strikes would be to provide free transport for the strikers (and only for this purpose) to the gathering points of the rallies, before and after the end of the demos.

Something similar should apply for the striking media workers: on general strike days, they should (only) report news related to the strike with full coverage of the mobilisations.

The battle must continue!

The previous general strike was 7 months ago, on April 6. Between the two general strikes, the unions had literally disappeared. No mobilisation, no initiative, no campaign in the workplaces, in a time when the anger in society was building up and growing. This is very telling about the real intentions of the trade union leaderships. They are simply launching symbolic mobilisations with neither preparation nor a plan for following-up.

And yet, Wednesday’s mobilization shows that the potential to overthrow the governments’ policies, and even  the government itself, is realistic. Workers are ready to put up a fight, even if their overwhelming majority has no confidence and is very critical of their leaders.

One of the issues on people’s minds was concerning the separate rallies dividing the forces of the movement. It is a firm position of Xekinima that despite the real ideological and political differences existing between the forces of the movement, a common struggle should be organised in the streets and in the workplaces. In the context of a common struggle, of course, each political force can propagate its own positions and can certainly criticise the leaderships for their role.

Based on the great success of yesterday’s General Strike and the indignation currently growing in society, the central unions GSEE and ADEDY should proceed immediately to announce a new 24-hour strike in the next month and start a campaign now to make it even more successful than Wednesday’s mobilisation. They should warn the government that if the basic demands of the movement are not met, they will go on a 48-hour strike in January.

Unfortunately, the current leaderships of GSEE and ADEDY are not prepared to go ahead with such a plan.

Based on this fact, a great responsibility falls on the shoulders of the forces of the Left (which include PAME/Communist party, DiEM25 and the organisations of the extra-parliamentary Left) and the workers’ unions and federations that have a radical and militant character, to take grassroot initiatives and push for such a plan. In order for this to be efficient, they must coordinate in a united manner, submit joint proposals for action (such as the above), disseminate them in the workplaces and thus exert pressure on the central trade union leaderships. One of the biggest problems of the labour movement is the fragmentation and lack of basic coordination among the forces of the Left. This has to end at some point for both the benefit of the movement but also of the Left itself.