The housing crises and the movements in Europe 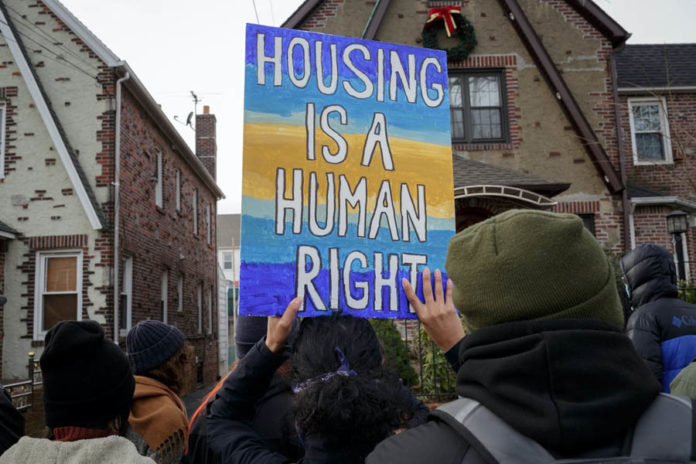 World War II destroyed huge parts of Europe’s infrastructure. The need to shelter big populations that had survived in the ruins was an emergency in most countries. At the same time, shortly after the war, social-democrat or Keynesian policies prevailed in most West European countries. A combination of factors enabled these policies: the expansion of the Eastern Block represented a threat to Europe’s capitalists that they had to counter; the active workers’ movement pressuring them to adopt state interventionist policies; and the economic growth based on the need to rebuild what was destroyed.

In this context most countries, especially in the European centre, adopted policies that made available affordable housing organised by the governments themselves, for an important part of the population. This is how social housing was born and promoted in Western Europe. Countries in Eastern Europe were anyway prone to providing free or cheap housing for all, even if there was huge room for improvement quality-wise.

The oil crisis of ’73 and the subsequent economic and political developments, marked the beginning of the end for Keynesian and expansionist policies in the European countries; neoliberalism was soon to prevail and therefore all social policies, including social housing would be attacked, abandoned or weakened. The ruling classes and the governments wanted to get rid of state possessions. So, they came up with an idea: why not sell social houses? At the beginning those habitats would be offered to those tenants who wanted to buy the place where they lived: they would benefit from favourable interest rates and conditions, if they needed to take a loan -which most of them did- and the mortgage would be debited from their monthly salary. Of course, those publicly owned habitats were not offered only to their tenants to buy. The states also sold them to big companies or “non-profit” organisations, which would refurbish and sell or rent them at prices which were no longer controlled, as no ceiling should be placed for sales or rents in a free market.

At the same time, governments in many countries actively promoted homeownership as a counterbalance to the retirement of social housing and the welfare state in general and as a mechanism to avoid social decomposition.

Social housing was not of course killed at one shot: it was gradually underfunded or sold-off and faded away. Some parts of the workforce kept on benefiting from it in Belgium, France, Germany or Sweden during the ‘80s and the ‘90s. But those were the extremely poor. As no new blocks of social housing were built, and the old ones were not funded, it would become extremely difficult to get a place.

This changed situation actually left out a large part of society, people who struggled for their living on low (but not extremely low) wages. A trap was set on them: if they didn’t want to spend an ever-larger part of their income on rent, their only option was a loan from a private bank. So, off they went, in essence being forced to enslave themselves to a bank mortgage for 20 or 30 years: they actually kept on paying a kind of “rent” – not to the state or the landlord this time, but to a bank.

These are the origins of the housing debt crisis which we were to experience by the end of the 2000s. People bound by a mortgage, suddenly suffered from huge cuts on their salary, worsened by the economic crisis after 2007-08. Or, even worse, lost their job, which made it impossible for them to continue paying their loan. Next thing we know were the evictions that happened in countries like Spain (and to some extend Ireland or the US): people who had already lost almost everything were also losing their house.

Gentrification: the special case of Berlin

Gentrification has also played its role in the housing crisis in many cities. After the fall of the Berlin wall, East Germany’s huge social housing complexes (like all DDR’s public assets) were sold out to private companies for peanuts. While workers saw their income shrinking by 5% – 20% in the ‘90s and the 2000s, because of the reunification process and the transition from DM to euro, East Berlin became a trendy place to live.

At the beginning of the ‘90s and even the 2000s, East Berlin was one of the cheapest capitals to live in Europe – but this is definitely not the case anymore, especially when it comes to rent prices. In a recent poll, 80% of the city’s population states that they are concerned by the skyrocketing rents. From 2007 to 2020, €42bn was spent in large-scale real estate investment, an amount which equates to more than the combined investment figure for London and Paris! Smaller landlords and state-owned social housing have been aggressively targeted by large corporate players for whom housing has become a vehicle for the management of global capital funds. The housing market has been rapidly transformed and this provoked rents increases, widespread displacement and the dismantling of local communities and social bonds. Many neighborhoods were rapidly gentrified while low-income residents struggled to find decent affordable housing.

Berlin is a particular case of gentrification, but similar processes can be observed in many other European cities, like Athens, Barcelona or Brussels. In all these cases, the common denominator is a disproportionate and very rapid increase in the renting and selling prices, together with the displacement of the poorer layers, who are pushed out of the gentrified areas.

A different story comes from Sweden. The country has a long tradition, of the state protecting housing prices until more or less the ‘90s. This was the result of long and persistent battles of the tenants’ and workers’ movement. As everywhere in Europe though, neoliberal policies prevailed also in Sweden and managed to gradually wipe out a series of protective measures: as a result, housing costs have also increased considerably in the past two decades.

Demanding affordable housing for all: it was about time

While the economic crisis is far from over, even if we are currently witnessing a rebound, the housing crisis still persists. The Covid pandemic of course has been accentuating immensely all of the above housing pressures.

Nevertheless, having a safe place to live is not a luxury, nor should it be a commodity. It’s a basic human right. And this is basically what the recently-born “European action coalition for the right to housing and to the city” is defending. This is a platform serving as a meeting point, coordination and exchange among several movements defending the notion of affordable housing for all across the European continent. From Sweden to the Netherlands, from Belgium to Romania, from Spain to Turkey, people are coming together and coordinating actions against evictions and for the control of housing prices. It seems like a sign of the times.

The most impressive results of the tenants’ movements are to be observed in Berlin, where the movement demanded a referendum on the housing problem in the city. The referendum did indeed take place in September and clearly pointed to the direction of protecting the housing market: 56,4% voted for 240.000 properties (which represent 11% of the city’s habitats) to come under state control. It is worth noting that these properties are owned by real estate corporations and that the campaign demand has been for their socialisation and expropriation. This is also highlighted in the campaign’s name “Socialize Deutsche Wohnen & Co”  (for more info dwenteignen.de). The movement has also worked on covering the legal problems such an initiative would be faced with, and even if the referendum result is not binding, it will be difficult to ignore.

A few weeks earlier, in summer 2021, the Swedish government was obliged to step back on plans for further reforms that would lead to more increases in the rents, under the pressure of the tenants’ movement who mobilised against them. One of the parties of the governing coalition removed its support to the government, which led it to collapse, precisely because the movement grew very strong and was impossible to ignore.

The housing movement is spreading across Europe. Memories from Spain are still alive: a few years ago, the fire brigade workers refused to facilitate evictions in Catalonia, stating clearly that they will not serve the banks and throw people out of their homes.

In Belgium the movement is more recent: it started at the beginning of the pandemic, when many people saw their income suddenly decrease because of the lockdowns and were unable to pay their rent. They mobilised asking for their rents to be subsidized for as long as they were unable to work. As the movement grew stronger, it managed to collect more than 2500 signatures in Brussels alone, demanding that a ceiling be imposed on rent prices by the state. It is important to note that 60% of the population in Brussels is renting and the income of almost half of them lies below the poverty line.

The pandemic also pushed for a movement on housing to grow in the Netherlands. Demonstrations have been recently organised in several cities, like Rotterdam, the Hague, Utrecht and of course Amsterdam, putting forward similar demands as in Belgium. Most Dutch cities, but especially Amsterdam, suffer from very high rents, while buying a house or flat is almost impossible for someone who is paid a median salary. Tourism and gentrification are the main sources of the pressure put on the house prices. In the Netherlands as well, this is the result of public housing being introduced in the free market and of housing in general being seen as a commodity, an area for profit, instead of a basic need.

All these independent movements from the various European countries should come together and coordinate. The coalition mentioned above (that currently has links in more than 15 countries) is trying to organise a European assembly in Brussels in February and a European march on March 27. This is a very diversified alliance, united under the basic understanding that housing, like food, health and education, is a basic human need and should not be considered as an area for making profit. No one should be living on the streets, and buildings should not remain empty. No one should be paying for their home more than they can afford.

As long as “market forces” are controlling all areas of people’s lives, as long as basic human needs are for sale under the free market’s laws, there will be people whose basic needs are not met. We should demand the expropriation of the huge developing and construction companies, as well as the banks, who control a huge part of the housing market. We need to fight for mass state investments in quality housing for all those who need it. We need to involve tenants in the running of the estates.

In order to fight for all these things, we need to build tenants movements in every neighborhood possible – and connect and coordinate these movements. Housing demands should of course also be integrated into the workers’ movement as low-income workers are the most affected by this problem.