The “eye of fire” in the Gulf of Mexico: natural gas is not benign 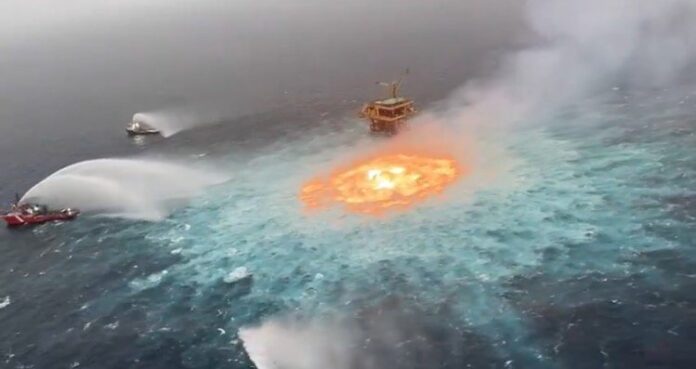 Stunning yet terrifying pictures of the underwater fire in the Gulf of Mexico caused by a leaking natural gas pipeline of the Mexican state energy company, were published and circulated on 3 July. The fire burned for about five hours, before it was contained; during all that time the water boiled and flames rose to the surface.

Apart from the fire, which of course raised water temperatures to boiling point, there is another major gas leak which will not stop releasing poisonous substances, until the pipeline in question is sealed. This is one more crime against the region’s marine ecosystem, where accidents, spills and environmental destruction are “usual business”.

We all remember the infamous accident of BP’s Deepwater Horizon platform in the same area in 2010; this was one of the most significant accidents in the history of underwater fossil fuel extraction. Eleven employees of the company were killed by the 2010 explosion; apart from the tragic human loss though, the explosion also caused a giant oil spill, which was responsible for the mass deaths of many species of marine wildlife in the area and has caused unprecedented damage to the ecosystem.

This recent accident, however, is not just another lethal episode in the disastrous history of fossil fuel extraction. It represents more proof that natural gas is far from being an “innocent”, “environmentally friendly”, “benign” fuel, as it has been portrayed by governments, private companies and even NGOs.

Natural gas is a dangerous mineral which, when leaked, can poison the atmosphere and the water. In the case of underwater mining, its leakage particularly means mass deaths of fish and other marine species, as it is rich in methane; in large quantities, methane displaces oxygen and creates a suffocating environment. When it comes to coastal areas, mainly dependent on tourism, fishing and similar activities, local economies can be even destroyed, thus causing a massive loss of jobs for the local population.

However, apart from the possibility of accidents and spills, using natural gas as a fuel is neither safe nor environmentally friendly. Contrary to what is publicly advocated by mainstream media, replacing oil with natural gas will not reverse the course of climate change.

It is true that the combustion of natural gas releases 50% less carbon dioxide (CO2) into the atmosphere than oil. The mainstream literature concerning climate change claims that decreased CO2 emissions at such a high percentage renders the natural gas a “clean” fuel. Yet, as mentioned above, the main “component” of natural gas (over 85%) is methane (CH4) which is between 30 and 35 times more potent in terms of climate change than CO2!

Methane leaks into the environment from extraction wells and natural gas transmission pipelines –there is no extraction and pipeline without a leakage rate–, but also when combustion of natural gas remains incomplete.

According to a study published few years ago by the environmental organization Friends of the Earth natural gas use at current levels will not only not reverse climate change, but will even further contribute to global warming.

Apart from the above data and the risks for accidents, the operation of gas and oil extraction itself has a significant impact on marine ecosystems, due to waste pollution, the destruction of large parts of the seabed, noise, etc. Operating extraction at places hosting sensitive ecosystems makes the risks much greater.

Underwater fossil fuel extraction represents a big threat anywhere it takes place. The Gulf of Mexico in particular is an area of major environmental degradation, as for decades, large energy companies have been drilling into the seabed and installing pumping platforms. Many of them have frequently experienced spills and accidents.

In addition, a large proportion of the tens of thousands of extraction wells in the Gulf of Mexico are inactive and have been abandoned by the companies that operated them without being sealed; therefore, they continue to let large quantities of gas leak into the sea.

An imminent danger in the Mediterranean Sea

Drilling is disastrous for the Gulf of Mexico located in the Atlantic Ocean, so one can only imagine what a greater risk it represents in an enclaved sea like the Mediterranean!

Energy multinationals are coveting the East Mediterranean’s deposits and they will not hesitate (as they have never done anywhere else) to cause massive destruction to the Mediterranean, in order to reap the greatest possible profits from the exploitation of fossil fuels.

These plans represent a great threat for the rare ecosystems of the East Mediterranean sea, including several protected areas, where endangered species are thriving. The threat is even bigger because the area is earthquake-prone, so the risk of an accident is even more real.

A spill, a leak or any kind of a serious accident would not only destroy the ecosystem though. All the bordering countries’ economies are to a great extent based on tourism, fishing , fish-farming, etc. Let’s consider the case in which an accident similar to the recent one, or even worse to the one of 2010 in the Gulf of Mexico, happens in this area. The marine environment will be quickly degenerated, as the sea is enclaved. This destruction will have a huge impact on the coastal regions whose populations basically make their living on tourism. The consequences will be devastating, not only for the environment, but also for these populations and the economies of the relevant countries.

The energy companies’ greed for the area’s fossil fuel has provoked nationalist tensions among the ruling elites of the countries concerned – and mostly those of Turkey, Greece and Cyprus. On at least two occasions, the Greek and Turkish fleets have come close to a heated incident in the past couple of years.

A war threat is for the moment avoided, but there is no guarantee that war will not come back to the agenda anytime soon, particularly as a massive arms race is taking place between Greece and Cyprus on the one hand and Turkey on the other.

The ruling elites are playing the nationalism card, in order to align the populations behind the idea of “defending our country”, which basically translates into the defence of colossal drilling multinational companies form Europe and the US. The peoples of the three countries will be risking their source of living, and even worse, their lives in the event of a heated incident or a war, while the CEOs of the oil and gas companies will be counting their companies’ profits.

The working class people from the three countries, as well as from the other bordering ones, need to get together and fight against the companies and the elites who put their land, their sea and their lives at risk.

Fossil and gas fuel are scientifically proven as harmful for the environment, as stimulating global warming and as representing an important risk for the ecosystems, as well as for the populations and their economic activities.

We need to fight for the drilling plans of the powerful energy companies in the area to be cancelled.

We need to demand scientific research oriented towards renewable and environmentally friendly energy resources, that will be also cheap and accessible to all.

Above all, we need to fight against any chance of war or military confrontation. The working class people have no interest in the ruling elites’ competitions and frictions.

It is pretty clear though that the reason behind all these threats is the competition for profit of the ruling class and the capitalist system that serves them. It is in this direction that 68 environmental groups and organisations from Turkey, Greece and Cyprus have come together and created the “Don’t dig/Kazma birak/Μας σκάβουν το Λάκκο” platform, aiming at fighting against the extractions plans and against war. Several coordinated actions have already taken place in the past months and a common will for going further in that direction is explicit.