The environment is collapsing, energy companies insist on fossil fuels 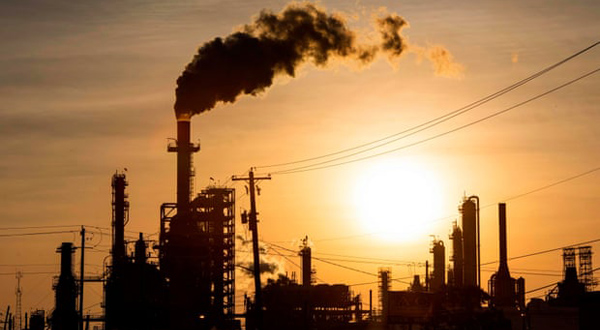 The Intergovernmental Panel on Climate Change (IPCC)’s sixth assessment report, prepared in advance of the COP26 conference in Glasgow in November, is a harrowing read. Scientists from dozens of UN countries have again come to frightening conclusions about the future of the planet.

There is no longer any doubt that the scope for tackling the climate crisis is narrowing more and more. There is also no doubt that the need is urgent for drastic measures not only to end greenhouse gas emissions, but also to protect the ecosystems that act as the planet’s shield against climate change.

Among other things, the scientists explain that today the concentration of carbon dioxide in the atmosphere has reached the levels of two million years ago, while the temperatures recorded are similar to those that prevailed on earth 125,000 years ago. At the same time, an acceleration in sea level rise and the melting of the ice caps has been detected.

The report sets out five possible scenarios for the coming decades.

In the best-case scenario, the one based on the assumption of complete elimination of greenhouse gas emissions by 2050, global temperatures are expected to stabilise at 1.4 degrees Celsius above pre-industrial levels by the end of the century.

In the worst-case scenario, that of greenhouse gas emissions doubling by 2050, global temperatures are expected to soar by 4.4 degrees compared to pre-industrial times.

Even the optimistic scenario does not translate into an immediate reversal of the climate change process, as even a temperature rise of about 1.5 degrees will have disastrous effects. Some of these are already affecting the lives of billions of people and all living organisms on the planet. Nevertheless, the scenario of a complete end to greenhouse gas emissions by 2050 is considered to be the best-case scenario. However, as we will see below, such a scenario is not at all part of the plan for the big energy companies and the powerful governments of the planet.

Instead of ending fossil fuel extraction and shifting to massively funded research and expansion of Renewable Energy Sources, governments and multinationals are insisting on mining and burning, mainly gas and oil. In practice, while a shift to renewables is indeed taking place (the questionable way it is happening is beyond the scope of this article but dealt with here), vested interests around the mining-oil lobby are determined to “drill every last molecule of oil” in the words of the Saudi Arabian Minister of Energy.

The US insists on oil

Despite the supposed shift to green energy and public statements about massive investments in renewable energy, the US government does not seem willing to get rid of fossil fuels. Instead, it is urging its oil-rich allies such as Saudi Arabia to increase production, as indicated in a statement by National Security Advisor Jake Sullivan: “President Biden has made it clear that he wants all Americans to have access to cheap and reliable energy.”

At home, the situation is not much different. Although Biden promised during his campaign to end domestic oil and gas extraction, his administration has already approved at least 2,000 new mining projects. Along with mining, new major fossil fuel transmission pipelines are granted permits; these pipelines constitute a serious environmental threat to the areas through which they will pass.

Meanwhile, at both central and local levels, the close relationship between governments and oil companies determines the policies that are pursued and the legislation that is passed. In the state of Texas, for example, energy companies have spent over $100 million in the last decade on the campaigns of candidates whom, understandably afterwards, they consider their employees. One of the laws that the oil lobby has forced in Texas provides that the state must refuse to make contracts with companies which have stopped doing business with fossil fuel extraction and sales companies!

At the same time, the US military causes more greenhouse gas emissions than 140 countries combined. Between 2001 and 2019, the US military’s combat operations in Afghanistan alone led to the release of 1.2 billion metric tons of greenhouse gases. This is huge, especially considering that the whole US produced 6.6 billion metric tons of carbon dioxide in 2019.

Hopes that the Biden administration will cut arms spending and arms sales are dissipating as the 2022 budget proposal includes a 2 percent increase compared to 2021.

In the rest of the world

Of course, this is not just the case in the US. Anywhere in the world where significant fossil fuel deposits are left, the big energy multinationals are claiming and acquiring them, with essentially no opposition from the governments, which are supposed to be setting high targets for reducing air pollutants.

Oil research continues between Namibia and Botswana; energy companies are expressing hopes that they possibly are about to discover the world’s largest untapped deposit. This deposit is situated beneath the Okavango Valley, Africa’s, and perhaps the world’s, most important wetland.

A little further north-east, an oil pipeline over 1,400 kilometres long, linking Uganda and Tanzania, is planned to be constructed. Apart from the risk of spills threatening the environment of the area, this pipeline is estimated to carry 210,000 barrels of oil per day. Burning this amount of oil is expected to release 34 million metric tons of greenhouse gases into the atmosphere per year, that is more than the total current emissions of the two countries combined.

In Guyana, South America, underwater oil extraction has been underway for several years; it is now threatening the coastline, the region’s fragile marine ecosystem, as well as the fishing industry, which is the main economic activity of the local population. It is also estimated that the use of the oil extracted in the region will lead to the total release of two billion metric tons of carbon dioxide. Exxon estimates that they will be extracting 800,000 barrels per day by 2025.

In Yemen, a tanker almost destroyed by corrosion has been lying in the port of Hodeidah since the start of the war in 2015; it is in such a bad state that it could explode at any moment, releasing large quantities of oil into the sea. The consequences of a possible explosion are estimated to be four times worse than the accident and oil spill caused by the Exxon Valdez tanker in Alaska in 1989.

These are just a few examples of the insatiable greed of multinational energy companies. They also illustrate the hypocrisy of governments that are supposed to be taking steps to reduce emissions. The example of the recent disastrous wildfires in Greece shows how climate change is being used as an excuse for the governments’ inability to tackle major natural disasters such as fires and floods. It is also utilised as an opportunity for “green” business, such as the onslaught of wind and solar parks, very often placed in the middle of sensitive ecosystems, which are destroyed in the name of environmental protection.

However, when the time comes for drastic measures to abolish or even reduce the use of fossil fuels, big companies and the governments that serve them turn a blind eye.

The planet urgently needs a comprehensive plan for immediate decoupling from fossil fuels and shifting rapidly to renewable energy sources. This is the only way to avoid an unremitting climate catastrophe, with some devastating effects already unavoidable. This shift requires massive public investment in research and the implementation of technologies that will have the least possible impact on the environment. This shift must be oriented to the real protection of both the climate and the planet’s ecosystems, instead of serving the interests of “green” businessmen. “Green” capital only cares about its profits, and doesn’t care if the “green” investments destroy fragile ecosystems.

For this purpose, the entire energy sector needs to be expropriated and brought into public ownership, under the control and management of workers and the community. The vast capital, reserves and infrastructure available need to be directed to repairing the damage this industry has caused and mitigating the impacts of climate-driven disasters. Such a transition would also be able to employ a significant number of workers and thereby contribute to solving social problems as well as environmental.

It is certain though that such a planning will never be operated within the framework of the profit system. At the end of the day, only human societies whose survival depends on the environment can and should step forward and act for its protection.