The commodity crisis and the protests by working-class people worldwide 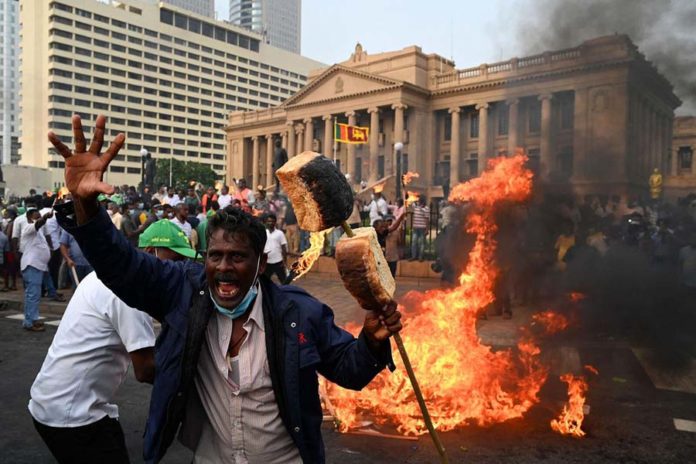 The crisis of the global economy, which was building up before 2020 and was triggerd by the Covid-19 pandemic, now seems to be entering a new phase due to the Russia-Ukraine war with dramatic increases in commodity prices. Linked to this, we see the first signs of a wave of protests by millions of people facing hunger, poverty and unemployment.

The World Trade Organization (WTO), in its April report, slashed its global trade growth forecast for 2022 from 4.7 percent to 3 percent, as a result of the Russia-Ukraine war and the return of Covid-19 restrictions in China. Additionally, the global economic growth forecast was also re-evaluated from 4.2 percent to 2.8 percent. At the same time, according to the US commerce department, the US economy contracted in the fist quarter for the first time since 2020, by 1.4 percent on an annualized basis.

The UK-based National Institute for Economic and Social Research (NIESR), stated that

“the conflict in Ukraine implies that the level of global GDP declines by 0.5 per cent in 2022, and close to 1 per cent by 2023 (which is about $1 trillion off global GDP). It adds up to 3 per cent to global inflation in 2022 and about 2 percentage points in 2023, which would also increase the cost of living and could further put pressure on household consumption.”

Since the war in Ukraine broke out, there is a breathtaking increase in commodity prices.

Copper prices broke a new record, exceeding 10 thousand dollars per tonne on March 7, with an increase of 10 percent compared to February 23. The price of aluminum per tonne in the same period of time increased by 20 percent, from $ 3,388 to $ 4,073.

Russia, which is facing severe sanctions, has a 35 percent share in the global palladium supply, and 10 and 6 percent in platinum and aluminum, respectively. In addition, while it has a 4 percent share in the world’s refined copper and copper mines, it also meets 5 percent of the nickel supply. The country’s revenue from raw metals and metallic products constitutes 10.4 percent of its total exports.

The problem in the supply of substances such as neon gas and palladium, which play a critical role  in the production of semiconductor chips, is also of concern for the global economy.

About 90 percent of neon gas is produced in Ukraine, and nearly 40 percent of palladium is found in Russia. Neon gas is used to feed laser lights projected onto the silicon layer in chip manufacturing, while palladium comes into play in the final stages of the manufacturing process.

“…because not only the oil market, but also the natural gas, coal, and even uranium markets will be seriously affected by this war. Its geopolitical dimensions are also much larger than in the 1970s.”

Fertilizer is one of the most important inputs in agriculture. Already last year, increased demand and higher production costs had caused fertilizer prices to skyrocket. This has also triggered a global increase in the prices of agricultural products.

Russia alone produces about 15 percent of nitrogen fertilizers and 17 percent of potash (potassium carbonate)-based fertilizers traded in the world, and has already halted its exports. Additionally, considering that the country is the larger exporter of natural gas, one of the most important raw materials of the fertilizer industry, it is clear that the current conflict will continue to affect prices. The Food and Agriculture Organization of the United Nations (FAO) estimates that the international reference price for fertilizers will increase by 13 percent by 2023.  Many countries, especially in Europe and Central Asia, source more than half of their fertilizers from Russia.

The global food price index for March, published by the UN Food and Agriculture Organization (FAO), shows the course of the price index since 1990. The index rose to 159.3 points in March, up from 141.4 index points in February. This means that the global food price index has reached a new high since its launch in 1990. According to FAO, the recent rise reflected all-time highs for vegetable oils, grains and meat sub-indices, while the sugar and dairy indices also increased significantly.

The FAO grain price index averaged 170.1 points in March, 24.9 points higher than in February- the highest level since 1990. The expected loss of exports from the Black Sea region has exacerbated the already scarce global wheat availability, and agricultural raw materials are costing the world market a total of 31 percent more than in the year before 2020- the first year of the coronavirus outbreak.

As regards wheat, Ukraine’s share in the world market is 11.5 percent, while Russia’s is 16.8 percent. The dependence on grain from Russia and Ukraine does not only affect many African countries or the Middle East,  but also includes important industrialized and so called “developing” countries such as Turkey, India and China.

Poor people in developing countries are at risk of starvation as the prices of wheat and other basic foods explode.

The gravity of the situation is interestingly well summarized in a joint statement published on April 13 by the heads of the World Bank, the International Monetary Fund (IMF), the United Nations World Food Program (WFP) and the chief representatives of the WTO. They warn governments against the possible anger of the masses:

“The world is shaken by compounding crises. The fallout of the war in Ukraine is adding to the ongoing COVID-19 pandemic that now enters its third year, while climate change and increased fragility and conflict pose persistent harm to people around the globe. Sharply higher prices for staples and supply shortages are increasing pressure on households worldwide and pushing millions more into poverty. The threat is highest for the poorest countries with a large share of consumption from food imports, but vulnerability is increasing rapidly in middle-income countries, which host the majority of the world’s poor. The World Bank estimates warn that for each one percentage point increase in food prices, 10 million people are thrown into extreme poverty worldwide.”

“… The increase in food prices and supply shocks can fuel social tensions in many of the affected countries, especially those that are already fragile or affected by conflict.”

One of the most important consequences of the economic crisis of 2008 was the Arab Spring, in which large masses of people overthrew dictatorships one after another. This process, sparked in Tunisia in 2010, began, among other things, with protests against the rapidly increasing bread prices. While history never repeats itself in the same way, we are now again witnessing protests in many places, from Sri Lanka to Peru, and from Sudan to Lebanon, in particular against rising food prices.

Protests in Sri Lanka have already led to the resignation of 26 ministers and it seems that this will not be enough to stop the protests completely. On April 29, 1,000 unions called a massive nation-wide strike, which was dubbed as the biggest in the country in four decades. The protesters for months now are gathering outside the presidential palace, forcing the hated president Rajapaksa to move to a different location.

In the face of increasing discontent, the government in Egypt sought alternative measures and has already resorted to a fixed price for bread. A curfew was declared due to the protests in Lima and Callao in Peru. Thousands of workers in Greece  took to the streets again, demanding an increase in wages, which are melting in the face of inflation. Protests were also held in Iraq, Turkey, Pakistan, Albania, Sudan and other countries. These protests show that things are boiling over, and that they could herald major social upheavals in the near future.

To counter the consequences of the current crisis for working-class people, unions, movements and the Left should work on a programme centered around a number of central demands such as:

The ruling class always suggests patience from the working class by presenting crises as if they are natural disasters. However, economic crises and wars, which result in hunger, misery, displacement and death for millions, are inherent phenomena of the capitalist system, where production is made for profit instead of human needs. The struggle against hunger, poverty and unemployment must therefore be combined with the struggle against the capitalist system itself and for a socialist society, based on democracy, freedom, justice and equality, where production is organized on the basis of human needs and in harmony with nature.