The “black international” of the far right 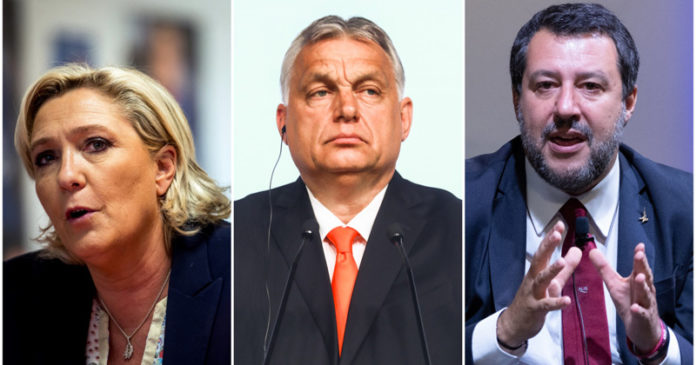 The rise of the far right in Europe and internationally is a key political feature of recent decades. Elections at the national and European level have seen various far right parties make significant gains in both size and influence; many have climbed from small groups to being the second or third-largest force in their respective countries, often also participating in coalition governments.

In recent years, the most important forces of the far right have sought to create a far-right coalition at an all-European level. Matteo Salvini, former Interior Minister in Italy’s coalition government, and Marine Le Pen in France, in particular, have been specifically working in this direction.

In May 2019, Salvini organised a far-right rally in Milan as part of his campaign for the European elections. Ten guest speakers from European far-right parties participated in this rally, including Marine Le Pen from France, Geert Wilders, leader of the Freedom Party in the Netherlands, but also representatives from the German AfD and the Danish People’s Party.

Since then, they have explicitly promoted the creation of a “black international” of the far right with the ambition of becoming the third force in the European Parliament.

On July 2 this year, 16 far-right European parties published a joint statement that was presented as the “cornerstone” of a “great coalition in the European Parliament” aiming at “reforming Europe”. The declaration was published as a response to the Conference for the Future of Europe, an initiative launched by the EU institutions to discuss and brainstorm on the Union’s perspectives.

This joint statement is signed by, among others, Viktor Orban’s governing party Fidesz from Hungary, the Polish governing party Law and Justice (PiS), the Spanish Vox, the neo-fascist Italian Fratelli d’Italia and the Greek far-right Kyriakos Velopoulos’ Hellenic Solution, in addition to Marine Le Pen’s and Matteo Salvini’s parties.

This initiative obviously represents a significant threat: if the far-right alliance manages to establish a new far-right political group within the European parliament, this bloc will become the institution’s third force. With 115 MEPs, as a unified European Parliament political group they will be able to claim a stronger presence, a more important role, greater funding and an increased ability to organise political initiatives.

Anyone expecting to read criticism of the European Union’s responsibility for mass impoverishment, caused by its policies, will be disappointed by its absence in the far right’s joint statement.

The joint text is largely oriented to the far right audience with references to “Fatherland, Religion and Family” as the ideological basis for the far-right parties to work side by side.

“We are convinced that the cooperation of European nations must be based on our tradition, on the respect for the culture and history of the European states, on the respect for Europe’s Judeo-Christian heritage and on the common values that unite our nations, not on their destruction. We reaffirm our conviction that the family is the basic unit of our nations.”

Through these principles, the European far-right is clearly defending the rhetoric of cultural nationalism. This rhetoric is closely linked in recent years to Islamophobia and anti-refugee policies. It describes Muslim culture as a danger and considers it the West’s duty to protect itself from the “Muslim invasion” and from “Islamisation”.

It is also worth noting that, in the same declaration, the far-right calls for the creation of “a protecting mechanism for the Member States, which would involve national constitutional courts”.

This demand aims at bypassing the European Court of Justice, the Court which has recently been called upon to review Hungarian laws targeting the rights of the LGBTQI+ community.

One of the questions that inevitably arises about this alliance is how solid its foundation is.

The 16 far-right parties co-signing the joint declaration have many differences between them, shown by the fact they are currently divided into two groups in the European Parliament.

Orbán’s party in Hungary has recently quit the right-wing grouping of the European People’s Party and has not yet joined any of the above groups.

The existing contradictions within the ranks of the far right are significant. Some of them, like the Spanish Vox and the Italian Fratelli d’Italia are trying to build an “anti-system” profile, while others, mainly in the northern countries of Europe, are participating in governments and implementing austerity policies.

Salvini’s Lega for example announced their plans to work with Berlusconi’s Forza Italia. How would it be possible for them to be in the same EP political group with the supposedly anti-systemic Fratelli d’Italia?

The contradictions do not stop there. The question of the international alliances is another fault line dividing the extreme right. A very significant point is the fact that Marine Le Pen considers Putin and Russia as an ally, while the Polish PiS takes a hard line against them.

Even on seemingly common ground, namely the refugee issue, there seem to be significant differences, reflecting the contradictory ”national” interests of the various far-right parties. When commenting on Salvini’s attempt in 2019 to approach Orbán and suggest to him to join the far-right alliance, Dresden political theory professor Hans Forländer explained:

“On the one hand, Italy wants to limit or even make migration to its external borders impossible. On the other hand, however, Salvini wants to transfer some of the refugees already living in Italy to other European countries. That in turn is categorically rejected by the movements and parties of eastern and central European countries. That is why this alliance has not yet managed to take shape. Salvini has made several efforts every now and then, but Orban’s reply was: ‘no, we have other ideas regarding immigration and the redistribution of refugees’. There is a conflict of interest because Salvini is participating in the government and has to find realistic solutions. So he wants to shift the burden to other countries, but the leaders of the movements in Poland and Hungary do not accept it.”

We can clearly understand that these are open issues, which constitute a field of disagreements and conflicts within the new far-right alliance.

The response of the Left

The reality of clashes within the ranks of the far right though, does not in any way diminish the lurking danger. The far-right parties’ attempt to form a common alliance should ring alarm bells for all oppressed people in society.

The traditional parties of the establishment have failed to provide convincing answers and any solutions to the problems of the broad layers of the population; this combined with  the enormous political weakness of the Left has created a huge vacuum with space for the far right to grow. The far-right leaders themselves are very conscious of this opening, and are trying to occupy it with the creation of this ”black international”.

The anti-fascist movement and the Left must mobilise an effective response to this black alliance.  Such a response should include:

For the Left, which wants to be consistent with its principles and declarations, the struggle against the far right must, in the end, put forward in a bold and decisive way, an alternative project for a way out of the prolonged crisis of the capitalist system, in favour of the interests of workers and youth, against a system that itself nourishes and cultivates divisions and hatred – which are the soil on which the far right grows and strengthens.

The Left, which fights for the above demands and for the overthrow of the capitalist system, must operate on a healthy and democratic basis both internally and when working with other organisations and with respect for the democratic processes of the movements. Otherwise none of its revolutionary objectives can be achieved.

We fight for a socialist, internationalist response to the present EU of capital and the multinationals – a socialist united Europe on a democratic, voluntary and equal basis.