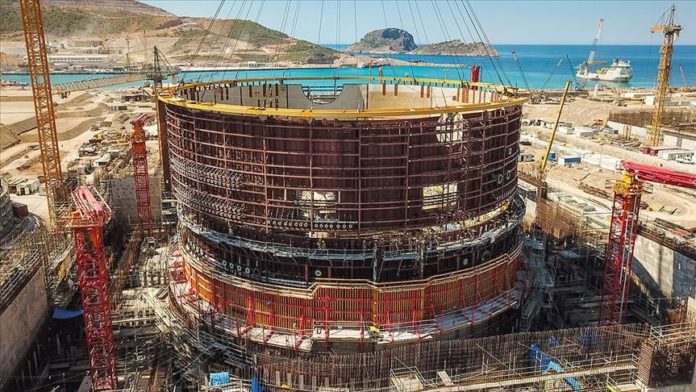 One such plant is the Akkuyu Nuclear Power Plant, which will be commissioned in 2023 and will be Turkey’s first Nuclear Power Plant. The building site is in the Mersin province, just across the sea from Cyprus. NPPs pose a great threat to nature and human life both with the destruction of thousands of hectares of forest area during their construction, and more importantly their potential to leak the radioactive material generated during energy production. For these reasons, all NPPs should be stopped immediately.

One of the most common arguments used by the Erdogan regime and its supporters while justifying the construction of NPPs is the claim that they will provide cheaper energy and decrease Turkey’s dependence on foreign energy. However, this has nothing to do with reality.

Akkuyu Nuclear Power Plant is being manufactured through an “interstate agreement” signed between the Turkish Government and the Russian state. With a cost of $20 billion, it is the most expensive project in Turkey at the moment. Its operational life is assumed to be 60 years. Its construction and operation for 20 years will be in the hands of the Russian Nuclear Atomic Corporation (Rosatom). Although the control of the power plant will be transferred to Turkey after a period of 20 years, 51 percent of its shares will still remain with Rosatom. That means that it will still be controlled by a foreign company.

The power plant is being built with the Build-Operate-Transfer (BOT) model, as is the case with all other major projects in Turkey. In all projects carried out under this model, the company that undertakes the operation is usually given a government guarantee which is actually a source of guaranteed income for the contractors. Just to give one example, while the daily traffic on the bridge built over the Dardanelles in March is at most 12,000 vehicles per day, the government agreed to guarantee the operator minimum traffic of three times that number. This means that the state is paying compensation to the operator for 30,000 vehicles per day not crossing the bridge! Of course, this money comes from the pockets of the working class.

The claim that Akkuyu will provide cheap energy is also not true. In Akkuyu, Turkey has guaranteed to purchase energy at a weighted average price of 12.35 to 15.33 US cents/kWh for at least 15 years. However, Turkey’s average energy purchase price is currently 4.4 cents/kWh!

The contractors at every opportunity emphasize that NPPs are made with high security standards. The truth is that NPPs are never one hundred percent safe. In an NPP, radiation can be emitted by leaks during the normal production process, by minor accidents as a result of technical and human errors, and during intermediate storage. In addition to these, it is always possible for NPPs to emit huge amounts of radiation caused by accidents due to natural disasters such as earthquakes, not to mention the possible threats created by wars or even terrorist attacks.

Another huge problem of nuclear energy is how to handle the high radiation waste. In essence, there is no safe storage for nuclear waste, until the radiation weakens over a vast period of time. The radioactive waste, which is placed in storage facilities, is accumulating day by day. The nuclear waste generated by the Akkuyu nuclear power plant will remain in Turkey and there is no clear information on how it will be stored.

On April 26, 1986, the first major nuclear disaster up to that time occurred with the accident at the Chernobyl Nuclear Power Plant in the north of Ukraine (which was then part of the USSR). The radiation-laden cloud which formed immediately after the accident spread first to a large part of the European continent and then to the entire Northern hemisphere. A third of the cloud covered the Balkans, Greece and Turkey.

While the WHO (World Health Organization) reports that 31 people died due to the direct effect of radiation, and 9,000 people died due to cancer caused by radiation up to 2006, Greenpeace states this number is as high as 200,000! According to the IPPNW (International Physicians for the Prevention of Nuclear War), between 50,000 and 100,000 people lost their lives up to 2006, while between 540,000 and 900,000 people were disabled.

After the tsunami that followed an earthquake in Japan on March 11, 2011, a series of accidental nuclear meltdowns occurred at the Fukushima NPP in the city of Okuma. Due to this disastrous accident, more than twice the radiation than that which leaked out from Chernobyl was spread through the air, soil, water and nutrients. While 100,000 to 150,000 people had to leave their homes, hundreds of thousands of animals lost their lives.

Akkuyu Nuclear Power Plant, located on the Mediterranean coast, between Aydıncık and Silifke in Mersin province in the south of Turkey, is only 88 kilometers away from Kyrenia on the island of Cyprus. The people of Cyprus understand very well that a nuclear accident in Akkuyu will harm them the most. For this reason, it is necessary for all the movements that have been fighting against environmental destruction and climate change for many years to come together irrespective of national borders.

Although production is a socialized process in capitalism, the distribution of profits is a private affair. This results in production being organized on the basis of boosting private profits rather than attending to human needs. The drive to constantly maximize profit leads to catastrophes both for humans and nature. The recent drive to again prop up nuclear power proves that the profit system must be abolished in order to save the earth, and thus humans and nature. Capitalists have no boundaries to stop them from destroying the environment.

This can be possible by eliminating private ownership of the means of production and replacing it with collective ownership by society. In a system where private profit is not the driving force behind everything, factors that cause unnecessary energy consumption such as advertising, packaging or poor-quality manufacturing for short-term consumption will be eliminated.

The struggle to shut down all existing NPPs, and to stop new ones from being built -like the one in Akkuyu- must be linked with the struggle against capitalism. The deepening energy crisis today is a by-product of inter-imperialist rivalry, which in turn has its base in the overproduction of commodities. In order to provide a radical solution to save nature and therefore life, we must engage in the struggle for a socialist world where human needs are placed at the center in harmony with nature. Where democratic economic planning can be implemented on a global scale, in order to take mankind from the realm of necessity to the realm of freedom.