Sweden: big movement of tenants against the “market” 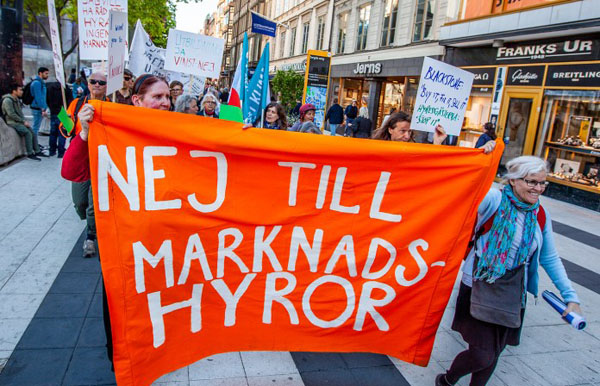 In the past few days Sweden saw a very big number of protests organised by tenants, across the country. Xekinima spoke with comrade Kristofer Lundberg one of the best known leaders of the tenants’ movement in Sweden and a member of Rättvisepartiet Socialisterna (Socialist Justice Party, ISA section in Sweden)

There were 155 demonstrations spread across the country from north to south. The most extensive movement against the government in decades. The extent of the protests has to do with the heavily criticized neoliberal January agreement that forms the basis for the government declaration, an agreement with the Social Democrats, the Green Party, the Center Party and the Liberals. In Gothenburg alone, we organized 40 demonstrations in the various districts.

The red-green government has used the pandemic to restrict the freedom of assembly, freedom of movement and democratic rights, at the same time there is a widespread fear of the pandemic when Sweden now enters its third wave with 14,000 dead. It is not possible to organize any larger gatherings, but by spreading the protests across the cities and the country, we have created a corona-safe opportunity to protest.

Sweden is in a period of 30 years of neoliberal politics, where housing has been made into a possible market. Public housing is sold to venture capital companies or converted into owner-occupied flats, at the same time a conscious gentrification process is underway in the larger cities where the working class, not least refugees and immigrants, are pushed into the periphery of the city. With renoviction, the companies go in and renovate apartments and double the rents as a result. In addition, the government now has a proposal to introduce market rents.- Today, the rents are negotiated between the tenants’ union and the companies, but the government’s proposal gives the companies the power to set the rents themselves. Surveys show that rents will increase by between 30 and 50 percent.

Against this, I took the initiative for a statement and call on the tenants’ union to gather for mass meetings and nationwide protest days two years ago when the government took office. 200 tenants’ union branches in Gothenburg adopted a statement at their annual meetings, but the national union controlled by the Social Democrats ignored the call. We then initiated a mass meeting under the slogan Defend public housing, labor right and the right to strike which gathered 700 tenants, the largest indoor meeting since the 1930s, I spoke alongside the Dock Workers ‘Union and the Construction Workers’ Union with new calls for nationwide protests. The pandemic stopped the mobilization and saved the government, but the foundation was laid for the movement that is now spreading across the country. The initiative for the campaign has been taken by members of the Socialist Justice Party, but now brings together the broad left and social movements and student organizations, a total of over 70 organizations.

The central requirement is no to market rent, but it is also about the need for a social housing policy, a halt to privatizations, a halt to gentrification and renovation bills and the re-communalisation of privatized housing.

I was active in the tenants’ union For almost 10 years, not once did I lose an election. For the past two years, I was regional chairman with responsibility for over 78,000 members in region West, in the country as a whole, the Tenants’ Union then had 540,000 members. In Gothenburg, we managed to transform the tenants’ union into a combating organization, we won important victories that became a model for the country, the number of members increased, the number of local union branches increased, the number of elected representatives increased, in contrast to the rest of the country that backed.- Before my re-election, I was suspended by the national leadership and accused in the national press of being behind a financial deficit of SEK 800,000, 80,000 euros.

This deficit was not something we knew about, bills paid from the regional office by employees not by elected representatives, no one had alerted me or mentioned that there were bills in my name that I did not order. From the day I was elected, the bureaucracy began to dismiss me. 78,000 members left the Tenants’ Union in one year, 2020 after I was expelled.- But I and many comrades with me still have a strong position within the movement, which not least the day of protest reveals, every election that has been 2021, we have reaped success and the national leadership has suffered defeat.

The Tenant union leadership distanced itself from the demonstrations, openly criticized the demonstrations, threatened local branches to participate, and subsequently criticized the mobilization in the media. The argument was that they could not stand behind the protest because it was initiated by the  Socialist Justice Party and my importance in the movement was seen as a problem.

The backbone of the movement is the Justice Party Socialists, alongside the Communist Party and the Left Party, but also local tenants’ unions that are in opposition to the national leadership. This unification, in turn, has opened up for more networks, organizations, associations and parties to join.

The potential is great for the movement, the government does not have public opinion on its side. 77 percent of the population is opposed to market rent. More and more people are being drawn into the struggle and it is becoming increasingly clear with the Social Democrats ‘negative role within the tenants’ unions.- What is needed is a reorganization of social movements, trade unions and tenants ‘unions as well as the left to lay the foundations for a new workers’ party.