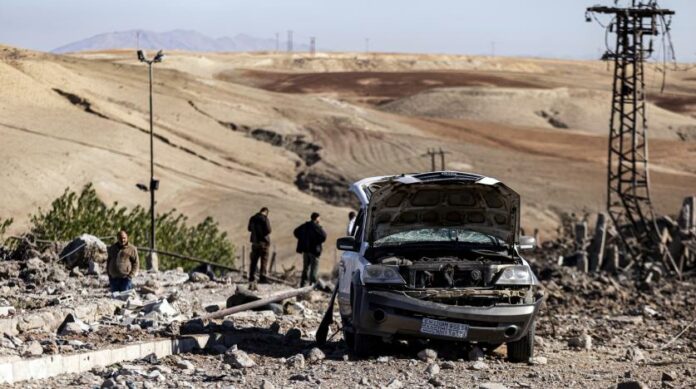 The Erdogan regime seems to have finally received the green light it had requested from the United States and Russia to start an attack on Kurdish areas. On November 20, 2022, the Turkish army launched a campaign of extensive air strikes against Kurdish areas in northern Syria and Iraq. As far as Erdoğan’s speeches indicate, he is planning to continue the ongoing air strike operation and complement it by send troops on the ground.

These attacks stem from the imperialist aspirations of the Turkish establishment and Erdogan’s efforts to prolong his rule. This new military campaign will bring even more killings, migration, ethnic and sectarian conflicts in the region. Everyone who opposes Erdoğan’s rotten regime and the capitalist system on which this regime is based, must demand an end to this military operation.

We publish a translation of a statement by the recently announced Labour and Freedom Alliance, which consists of the Peoples’ Democratic Party (HDP), the Workers’ Party of Turkey (TİP), the Labour Party (EMEP), the Labour Movement Party (EHP), the Social Freedom Party (TÖP) and the Federation of Socialist Assemblies (SMF).

The AKP and MHP government has started to embrace war policies again in order to prolong its life and restore its lost legitimacy with violence. Last night, an airstrike was carried out against several civilian settlements in northern and eastern Syria, using the brutal attack on civilians in Taksim as a pretext, which the government is trying to obfuscate. This operation is an attack by the government to prolong its life, and is not the will of the peoples of Turkey.

The AKP-MHP government, which resorts to violent methods against the peoples, workers and oppressed of Turkey whenever it is stuck, politically bankrupt and unable to govern, implements the same destructive policies on the peoples of the region. The peoples and workers of Turkey have been paying the heavy bill of this aggressive policy of the government in the region, especially in Syria, for decades. The children of this country are dying, the economy of this country is being plundered, fascist and despotic rule is wanted to be made unquestionable. Deepening poverty, unemployment and futurelessness are tried to the fate of the country through such war impositions.

The attack last night was also carried out with the approval and consent of international global and regional imperial powers. This war is an attack to prolong the life of the government and to maintain its power. This attack has no legitimacy, it deepens regional problems, especially the Kurdish problem. We defend the Kurdish people’s right to self-governance in the region, the struggle of the peoples of the region to establish a democratic order and reject these aggressive policies.

As it has been experienced many times before, the government’s Syria policy and its attacks on Northern and Eastern Syria have fostered ISIS, Al Nusra and similar organizations and have brought them to the point of threatening the future of the peoples of the region, especially Turkey. Afrin, which is the scene of power struggles between gangs, is the clearest example of this. Despite all attempts to obscure and cover up the truth, the first signs show that the Taksim attack was also carried out by these forces.

As the Labour and Freedom Alliance, we will continue to stand against all kinds of war policies. On this occasion, we call on all our people, workers, women, youth, national and international democratic circles, anti-war and sensitive groups to stand against such policies and to object to the policies of the government to prolong its life with war.