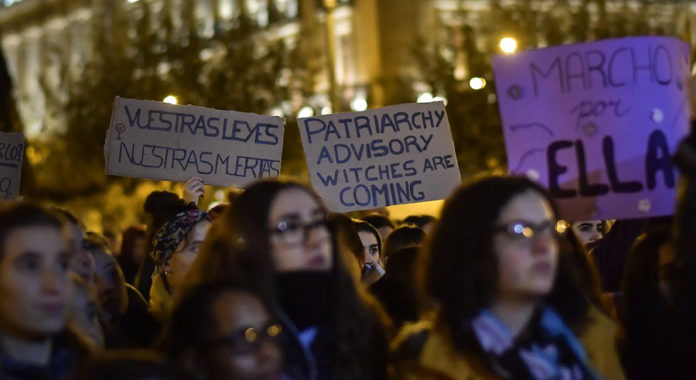 On the 14th of October, the law of guarantees of sexual freedom, also called the “only yes means yes” law, arrived at Parliament and overcame the first obstacles to be approved – two substitute bills presented by the traditional right-wing party PP and the far-right, Vox.

The law is expected to be finally approved next year, and it can be considered an answer to the demands of the feminist movement in the last years, especially after the rape case known as the “the manada (wolf pack) case”.

The main point of this law is that consent will be the key to judging sexual crimes and it is considered that there is consent only when this has been freely expressed and it reflects clearly the will of the person. According to the government, when the law is finally approved “silence or passivity won’t be considered consent”.

The so-called “wolf pack case” began when an18-year-old girl was raped by 5 men (including a member of the Civil Guard and a member of the Spanish Army) in July 2016 in Pamplona, and became a clear testimony of the patriarchal and misogynist character of the justice system in the Spanish state: the perpetrators were considered guilty of only “sexual abuse” and not “sexual aggression” (meaning that their penalty was singificantly smaller).

The law still in force judged in this case –as in many others– that there was no sexual aggression because the victim did not put up any physical resistance.

The many and numerous demonstrations in Pamplona and many cities and towns around the Spanish state against the sentence sent a very clear message tο the judges: that the girl may not have suffered physical violence, but she had been intimidated and this should therefore be considered rape. They were also asking the judges why women had to be terribly injured or killed to be considered the victims of rape. Along with slogans like: “I believe you” and “Sister, here is your wolf pack”, they also had the slogans: “No is no, and the rest is rape”, or “Dressed or naked, my body cannot be touched”.

Women, and especially very young women and girls, were very active in these demonstrations. They were putting very clearly the question of consent, and specifically active consent, at the centre of the debate about sexual violence, and rejecting that circumstances like going out at night, being drunk, dressing in a particular way, etc, meant that they were putting themselves at risk and therefore could be the ones to blame if they suffered from any form of sexual violence.

The victimization during the wolf pack rape case was clear, for example when personal details of the victim, including her personal identity card, were published in sexist online forums, with the clear intention to intimidate her. But this also took place in court, when the judges accepted a report about the daily life of the victim after the assault, as evidence, a report by private detectives that had been commissioned by the perpetrators defense team. To add fuel to the fire, the judges left the perpetrators free on bail for more than a year until the final sentence arrived. At that time they were not only already convicted of a sexual crime but were also being judged for a previous recording found by the police on their mobile phones in which they were touching the breast of an unconscious girl in a car (for this particular case, they were eventually found guilty, but only of sexual abuse).

These and many other decisions made it clear that the rights of the girl victim of the rape were not a priority of the judges.

The fact that the perpetrators were finally charged with sexual aggression, meaning that their sentences were heavier, and they were ordered to immediately go to jail, was only because of the pressure of the feminist movement.

The demonstrations of thousands of women in dozens of towns and cities did not only take place after the first sentence, but also after different decisions taken by the court. The slogans against sexual violence in general and reffering to this particular case were also key on the November 25th demonstrations, or during the feminist strikes on March 8th in 2018 and 2019. Millions of men and women were on strike or on the streets, against all types of violence and discrimination against women on these dates.

These strikes have undoubtedly been the biggest feminist mobilizations in the history of the Spanish state, making the feminist movement the most important one in recent years, although not the only one.

Victories of the feminist movement

These enormous mobilizations have obtained important victories, like the second sentence to the “manada”, as we explained before, which finally sent them to jail; or even some economic demands like the important increases of the minimum wage by the current PSOE-Podemos government.

This victory is also linked to to the working-class character of the feminist movement and its demands on the Spanish state,to the fact that it has correctly rejected being considered as a movement of “all women” including bourgeois women, their female representatives in the institutions or for demands such as for surrogacy which are actually against working-class or poor women. Instead, the movement asked for the rights of working women, including migrant workers to decent jobs and conditions, housing and public services, and for the end of precarious conditions which especially affect women.

When the new law on sexual freedom is approved, it will also be an important victory for the feminist movement, and not merely the action of a “progressive, feminist government” as the PSOE-Podemos coalition presents itself. First of all the law is well overdue, as it will reflect the agreements in the Istanbul Convention, approved by the Council of Europe in 2011 and ratified by the Spanish state in 2014. This shows clearly how the institutions and governments have differing priorities from the working class and popular masses, when European rules in relation to budget cutbacks are immediately and brutally imposed.

As we explained the new law will remove the distinction between “sexual abuse” and “sexual aggression”,. Active consent will be a key criterion, instead of considering if the victim was physically forced. The use of substances to nullify the victim’s will be an aggravating circumstance, instead of facilitating, as it is now, a softer sentence because the victim does not put a physical resistance to the aggression. Other important changes that the law introduces are that it has the objective to educate and create a culture in all society against sexual violence, and wants to create services to accompany women and children victims of sexual violence during the whole process.

However, all these welcomed changes in this law will not mean much if they are not properly implemented. For example, if we don’t fight against the misogynist ideas present in society, and especially in the remnants of the previous Francoist state which were never removed from their positions – for example elements of the security forces, or the judiciary system. Moreover, similar educational measures to the ones mentioned above, in favour of women’s or LGBTQ people’s rights, are systematically being attacked by budget cuts or directly by the far-right rhetoric.

Other laws like the right of abortion are attacked by regressive hospitals and doctors, which means that many times women can only terminate their pregnancy by travelling to another city or region or going to a private hospital, instead of their closest public hospital.

All theses mean that the movement cannot stop at the institutional struggle, but that the struggles on the streets are as important as ever, if we want to get real changes in society that meet the needs of working-class and poor women, and if we want to stop the attacks of the far-right on immigrants, LGBTQ people, the feminist movement and the working-class movement as a whole.