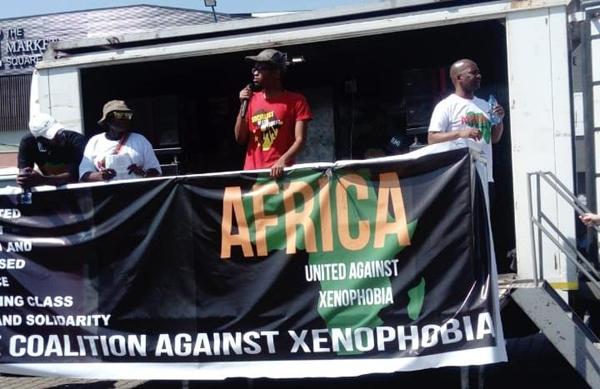 The Workers and Socialist Party calls for ongoing action and intervention to fight against the reactionary xenophobic mobs, criminal violence and rampant looting targeted at foreign migrants.The political and corporate capitalist elite are responsible for all these crimes against migrant communities and the working class. We can also not overlook the daily violence exerted towards the working class.The capitalists’ neoliberal austerity policies pursued by this government have led to a social crisis.The situation is of course not helped by incitement and inflammatory xenophobic statements by government officials. Migrants are scapegoated for the failures of the policies of the ANC-led government. These policies have failed to overcome the burning crises of unemployment, poverty, collapsing public health, education services and housing.

The working class must rebuild its movement to overcome divisions. We must rebuild our mass fighting organisations to unite in struggles to challenge the ANC’s capitalist austerity. Unemployment in South Africa is sitting at 10 million yet we have workers on night shifts and compulsory overtime. This year alone, standard bank closed about 91 branches (with over 1200 jobs lost) and the mining sector has been retrenching workers since the year begun. The government was contemplating chopping wages of government employees by 10%, despite the rise in fuel, clothing, food prices etc. Unemployment and increasing product prices is but an inevitable part of capitalism: reducing the workforce means saving on profits. We call on trade unions to organise workers and collaborate with community organizations to fight xenophobia and gender-based violence; to fight for quality and accessible healthcare, housing, efficient transport systems and for companies to absorb workers instead of hiring fewer people for longer hours and little pay. Above all the working class need a mass workers party on a socialist programme to end capitalism, its oppressions, discrimination and violence against the marginalised and poorest sections of the working class.

The bloody scenes of xenophobic violence that broke out in Pretoria and Johannesburg, and then spread to other cities and townships, sent shockwaves across the country and the world. Their spread threatened to engulf the entire country in bloody xenophobic pogroms. The Minister of police even declared a national state of emergency. But the reality is that the police and the state cannot be trusted to resolve the crisis. The police are directly and immediately responsible for stoking the current waves both in Pretoria and Johannesburg. Although in Pretoria the xenophobic attacks were sparked by the shooting of a taxi driver, allegedly by a Nigerian drug dealer following an argument, it is no doubt the Johannesburg mob revived the xenophobia.

Following clashes with small shop owners in Johannesburg CBD, who fought back against extortions, arbitrary raids, confiscations of goods, the police responded with raids, mass arrests (most of which were unlawful) and media campaigning, indiscriminately criminalising migrants. It was these incidents which created a xenophobic hysteria that sparked the current wave of xenophobic violence. In its rhetoric, the police were echoed by politicians and government officials across the establishment parties. The premier of Gauteng, David Makhura and Gauteng mayor, Herman Mashaba have contributed to the fanning of xenophobic flames. So has the Zulu King, Goodwill Zwelithini, former Minister of Police, and many other Ministers and senior government officials. Every one of these politicians is scapegoating the poor migrants for the crisis of the capitalist system and failures of their policies to deliver on the electoral promises and solve challenges facing the working class.

These statements however no longer reflect just individual views. For the first time since the 1994, major parties like the ANC and DA, as well as numerous small parties, contested elections on anti-migrant programme. These made xenophobia an official programme of major parties and government policy, and legitimised it. In so doing they provided the political cover and impunity for criminal elements that seized on these, on the desperation of the hungry and starving masses, to carry out rampant and organised looting, robberies, murders, rapes and many violent crimes against the migrant communities.

The opportunistic anti-migrant rhetoric of the political establishment partially echoes the rising tide of right-wing populism internationally. The elections of Donald Trump in the US, Borris Johnson in the UK and Bolsanaro in Brazil are part of this counterrevolutionary current sweeping the world. This international phenomenon reflects the deep roots in the crisis of world capitalism.

A Capitalist crisis: A lake of fuel for xenophobia.

The recent economic downturn of 3,6 percent in the first quarter, was a sharp twist in the economic volatility that has characterised the now decade-old economic stagnation. It signifies a deepening economic crisis. Capitalism has no way out of this prolonged agony other than the barbarism of xenophobia and other prejudices rooted in the brutal exploitation and oppression of the most marginalised sections of the masses.

The 10,2 million people currently unemployed and the majority of the half a million new entrants in the job market, have no hope of finding work, when the most ambitious programme of government promises only two million jobs in 10 years. Without any massive public works programme, the crises of a 2,3 million housing backlog; collapsing public health system; failing transport system and poor schooling facilities, will continue to grow each year. The deepening economic crisis threatens to wipe out the remaining, weakened industrial and mining base, which is the mainstay of the SA economy.

The ANC-led government has absolutely nothing to offer but to impose more cruel versions of the same neoliberal policies which have plunged the economy into its current dire state to begin with. The so-called stimulus package unveiled by Ramaphosa early last year, though cloaked in a different language, is the same old recipe guaranteed to fail. In the best scenario, they hope to create jobs only for 2 million of the many more millions of new entrants to the labour market in the next decade. Caught between a rock and a hard place of a colonial low-wage economy with a poor working class that cannot anchor the industry and a shrinking world market, South African capitalism has no way out than break the poor even further. We are urged to be patient in building the country, but hunger cannot be postponed, rent payments cannot be postponed. The imposition of the National Minimum Wage  Bill is a verdict that this pretense at “working together to eliminate poverty” is a way to make the rich stay rich and the poor even poorer.

Seeking to shift the blame for these failures and anti-working class measures, such as cuts in public spending, jobs and wages, government officials have placed the blame for crime, unemployment, drug abuse and all other social ills emanating from the economic and deepening environmental crisis, squarely on the shoulders of the immigrants. Genuine and dire as the challenges faced by communities are, the indiscriminate and violent attacks against foreign nationals are not only misplaced, but also help to cloak the underlying cause of all these social ills – capitalism! All of these are inevitable because the contradictions of capitalism are what defines it. In an aim to maximise profits, or in Cyril Ramaphosa’s words “maximum return on their investment”, companies will hire a thinner work force for longer hours and low wages. With automation taking over, this will include an even smaller workforce. Pension funds, fully paid maternity leave, medical aid, housing benefits, provident funds and other such benefits, which the working class cannot do without, must necessarily be sacrificed if the bosses are to be guaranteed maximum profits. It is to capitalism, therefore, that the working class, local and foreign, must take the fight– for it is by defeating capitalism, and reorganising society based on a socialist programme, that all these social ills will only be of historical interest to the youth and future generations.

Tide against the Stream

Workers And Socialist Party not only takes a firm stand against the xenophobic hysteria and attacks, but calls on the entire labour movement, community and youth organizations, all progressive forces in society to hold the line and not yield an inch of ground to combat xenophobic sentiments amongst members and in society. What the South Africans have in common with African immigrants is that they are working class. It is the social and political cohesion of the only force that can overcome the conditions breeding xenophobia -the working class-  that is at stake and gravely threatened. The fundamental task is to rebuild the mass movements to combat xenophobia, racism, sexism and other prejudices and to unite the working class on a transitional programme for immediate demands of the working class and for a socialist alternative. Africa must be organised on a socialist programme. We need a continent wide general strike! The working class divided will never conquer.

The workers movement and the youth must lead the fight. The havoc wreaked by these attacks is a bloody correction for the political complacency, and even complicity of the trade union movement which abdicated political responsibility to the class enemy on this, and other fundamental challenges, facing the working class and the marginalised. The workers movement must now mobilise and act decisively against xenophobic mobs, violence and discrimination, growing unemployment, poverty and the attacks on the working class that are fuelling them.