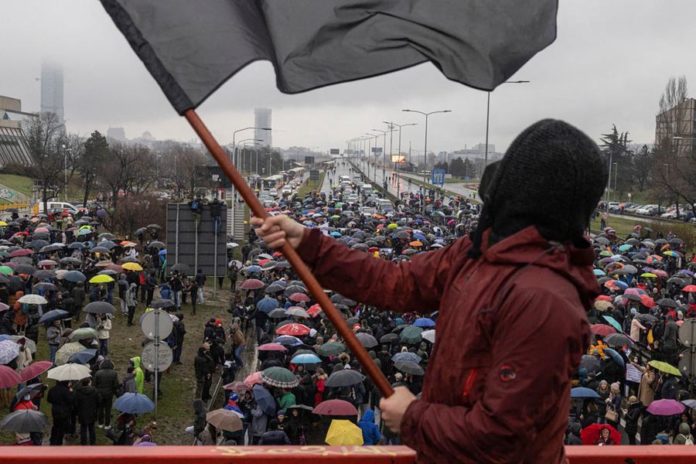 For several months now, people have been mobilising against the plans of the mining company Rio Tinto in Serbia. Mobilisations have been growing in the last few weeks, with more and more people are being involved in them.

On Saturday and Sunday 4 and 5 December, tens of thousands of people in more than 50 cities took to the streets against the pharaonic project being prepared by the company and against the government of A. Vucic, which supports the company’s plans.

The protests have been going on since September in Belgrade, but are now spreading to the rest of the country. Among other things, the protestors have been blocking highways and bridges each time for several hours. In several cases there have been many arrests and sometimes protesters were violently attacked by masked men.

Under pressure from the movement, the government was finally forced to withdraw the recent law on facilitating land expropriation, as well as a change that was introduced related to how referendums are conducted. Residents of the area affected by the mining activities, as well as the environmental movements, considered these laws as intending to help the company’s project.

It is important of course that these measures were withdrawn, but an overall victory against the company is still a long way off, as the mining projects can still proceed.

Lithium reserves in the Jadar Valley

The epicenter of the project is located to the west of the capital, in the Jadar Valley, an area with significant lithium deposits. Lithium is of particular interest to mining companies, the new technology companies and the automotive industry, because it is one of the key materials necessary to fabricate batteries for computers, mobile phones and electric cars.

Its extraction is presented as an environmentally friendly process, supposedly because a large part of the material will be used for the production of electric cars. In reality, lithium mining is very threatening to the environment, as this activity causes destruction to the soil, local vegetation, water reserves, etc., on a particularly large scale.

In Serbia, lithium mining started a few years ago with a relatively small mine that Rio Tinto claimed would not create problems for the region. The mine began to gradually expand, while the company proceeded to buy large parts of land surrounding the area. It actually still keeps on buying more and more land. At the same time, in an attempt to calm opposing voices, the company made donations to local institutions, “gifts” to local farmers, etc. Thus, some residents support the company’s plans, having fallen into the trap of the alleged “benefits” of the project for locals.

But most residents are resisting, as they understand that the long-term negative effects cannot be counterbalanced by the temporary benefits. After all, they know very well that their area, where floods happen quite often, is faced with a high risk of major toxic waste spills originating from the mine site. As recently as 2014, a similar flood led to the spillage of toxic materials from an old mine into residents’ fields.

Today, the company aspires to build Europe’s largest lithium mine in this area, an estimated investment of €2.12 billion.

The total area of the project is expected to be close to 3.870 hectares and, according to an environmental study, will cause irreversible damage to the local environment. Along with the environment, local residents believe that the region’s agriculture and livestock activities are threatened.

The company claims that it has taken all necessary measures to minimise the environmental impact. However, those who are even slightly familiar with its past, find these claims hard to believe. From Australia, where Rio Tinto’s mining projects have led to the destruction of hundreds of archaeological sites, to Papua New Guinea, where the company is accused of dumping a billion tons of waste into a river near one of its mines, the company is carrying a reputation for destructive greed.

The Serbian government describes the local residents who oppose the project as irresponsible troublemakers who hinder development. It is not unlikely that they will try again to vote laws that will facilitate the expansion of the company’s project. For his part, the supposedly “progressive” president, A. Vucic, is spreading rumors that Rio Tinto’s competitors are behind the mass demonstrations.

A recent “undeniable” argument concerning the mining of minerals which are used in the electric cars production, is that it is all about reducing greenhouse gas emissions. In reality, electric cars themselves are not as environmentally friendly as the publicity around them is claiming; the electricity required to charge their batteries is currently largely produced from fossil fuels. At the same time, the environmental damage caused by the local mining of these materials cannot be overlooked in the name of supposedly reducing emissions.

Mining is of course one more environmental crime which they are trying to defend on the grounds that it … supposedly protects the environment.

Serbia has recently been considering a switch to nuclear power in order to get rid of the polluting coal that currently is used for the production of 68% of the country’s energy.

Taking such “risks” might pay off for many years, or even decades, because cheap energy with no emissions of air pollutants is produced in this way. But the consequences of a potential accident can be devastating for people and the environment for decades. The Fukushima case is proof that such accidents cannot be excluded, even in technologically very highly advanced countries, like Japan.

Such destructive methods are solely used in order to have the profits of energy companies increased under the pretext of protecting the environment. Being faced with such methods, societies must demand a real shift to renewable sources. This shift cannot be coordinated on the basis of what is convenient for any “green” entrepreneur, but through public investment and the nationalization of the energy and mining sectors. This should be combined with massive investments on research about green technologies. Planning for the green transition must take account of local factors, so the least possible burden is put on ecosystems and local communities.