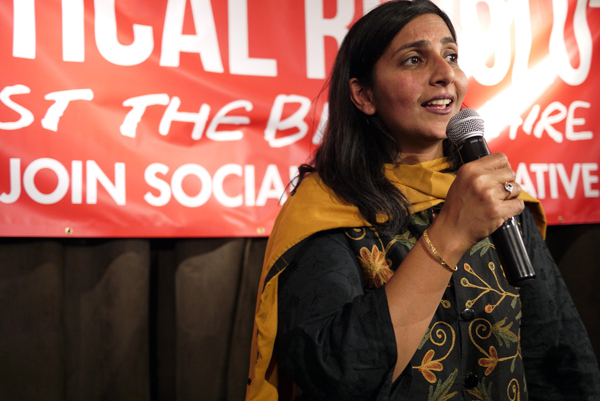 We publish below an article from Jacobin on the defeat of the recall campaign against the socialist councillor Ksama Sawant. The outcome was an important victory for her organization Socialist Alternative and the Democratic Socialists of America (DSA) -of which she is a member.

In a razor-tight race, Seattle’s socialist city council member Kshama Sawant beat off a recall attempt bankrolled by the city’s business interests. She won by just over two hundred votes in a race that went down to the wire. The outcome wasn’t determined until two days after the election, as mail-in ballots streamed in after election day. Six hundred ballots have been challenged and could still be counted, but they are not expected to change the recall’s outcome.

Sawant won largely based on a concerted effort to get out the youth vote. Among all demographics, the eighteen to twenty-five cohort was the only one which increased its turnout from the most recent election, held only one month earlier. Three hundred more voters in that age group voted in this election compared to last month, and those three hundred were largely the margin of victory. To indicate the level of interest in the race: last month’s general election turnout was 43 percent. Turnout for the Sawant recall — a single-candidate special election — was 53 percent.

Seattle’s capitalists have tried repeatedly to stamp out Sawant and her socialist politics from City Hall since her election in 2014. Repeatedly, they have failed.

“We Are Coming for You and Your Rotten System”

In 2013, Seattle voters elected Sawant for the first time. Since then, she has been the council’s most radical member.

Though she has collaborated with fellow progressives on various legislative issues, Sawant is known for her take-no-prisoners style. She does not triangulate. She does not compromise for the sake of legislative success. She asserts her politics without fear. Though this makes her a target for conservative business interests who continually brand her as a dangerous extremist, it also earns her the passionate support of the city’s progressive voters.

In celebrating the passage of a resolution taxing Amazon and other major companies in order to build low-income housing, she unabashedly confronted Jeff Bezos:

“We were clear-eyed about naming the real force pulling the strings: Amazon. Many argued that we should not “antagonize” big business and instead try to broker a deal, but we know that our power comes from working people getting organized, not from any negotiation with the elite. For those watching from outside Seattle, don’t let anyone tell you in your fight to tax big business in your city that you’re being divisive, because class struggle is what gets the goods.

The private, for-profit housing market has utterly failed working people. Not just here and now, but everywhere and always. Because capitalism is completely incapable of meeting the most basic needs of working people.

Internationally, the working class needs to take the top 500 corporations into democratic public ownership, run by workers, in the interests of human need and the environment, not billionaire greed.

I have a message for Jeff Bezos and his class. If you attempt again to overturn the Amazon Tax, working people will go all out in the thousands to defeat you.

And we will not stop there.

Because you see, we are fighting for far more than this tax, we are preparing the ground for a different kind of society.

And if you, Jeff Bezos, want to drive that process forward by lashing out against us in our modest demands, then so be it.

Because we are coming for you and your rotten system. We are coming to dismantle this deeply oppressive, racist, sexist, violent, utterly bankrupt system of capitalism, this police state.

We cannot and will not stop until we overthrow it and replace it with a world based instead on solidarity, genuine democracy, and equality — a socialist world.”

She is an Indian immigrant who earned a degree in computer science at the University of Mumbai and began her career as a software engineer. She currently teaches economics at two local community colleges and is a leader of the Socialist Alternative.

Sawant is a fiery speaker known for her speeches at local protests. She has championed several issues beloved by local progressives including demanding that local companies pay more in taxes to support housing for the homeless and education. Her local campaign for a $15 minimum wage helped build momentum for similar laws around the country. She has also championed renters’ rights and an eviction moratorium during the COVID epidemic.

Sawant is unsparing and unrepentant in espousing her radical views. For that reason, she serves as a third rail in Seattle politics. Her colleagues may join with her on some issues, but they often steer clear in order to avoid the pushback the “radical socialist” receives.

Last year, business decided to take a different tack. Since they could not defeat her in a general election, they decided to attempt a recall.

They cleverly determined that scheduling the recall during a regular election would tend to increase turnout, which would not be to their advantage — from the anti-Sawant point of view, the fewer voters who showed up for the recall, the better. So they delayed registering their campaign in order to force a special election in which this single issue would be on the ballot.

Anti-Sawant forces also raised over $1 million to fund TV commercials, glossy mailers and radio spots targeting her as a law-breaking extremist who would encourage mobs to attack City Hall and the homeless to take over the city stately neighborhoods. They even created a separate PAC enabling donors to give unlimited funds to support the recall. A Better Seattle raised $200,000 from its largely corporate donor base.

To give a sense of how much money they spent: in the last election in which Sawant was reelected, the Chamber of Commerce PAC spent a then-unprecedented $1 million on all four of the council races (including Sawant’s). This time they spent that much just to defeat a single candidate: her.

What the recall campaign had in well-heeled donors, the Sawant campaign made up for in committed small donors. And she matched her opponents virtually dollar for dollar.

Despite Sawant’s victory, we should not expect the backlash threat of the corporate elite to decline. We saw this in the write-in campaign against Buffalo’s democratic socialist mayoral candidate, India Walton, which restored to office the Democratic machine mayor who’d lost the primary. Capital does not like losing, and it will retrench and return to the fray whenever left candidates like Sawant and Walton emerge.

The Backlash Against Black Lives Matter

The victory over the Seattle recall takes some of the sting out of the defeat of progressive candidates for mayor and city attorney in November’s general election. It confirms that an avowedly progressive socialist message still resonates among Seattle voters.

Those defeats were, in part, a backlash against last year’s Black Lives Matter protests, in which activists occupied the heart of the city’s Capitol Hill in June 2020. Two of the incidents emphasized by the recall proponents against Sawant were her participation in a march on City Hall, in which she used her key to open the building for the protesters. Separately, the local Democratic Socialists of America chapter organized a march on Mayor Jenny Durkan’s home for which Sawant was blamed.

Concurrent with the Capitol Hill occupation, the city’s corporate power structure was running a competing campaign portraying the city as “dying” due to crime, vandalism, and homeless encampments “invading” schools and neighborhoods. The city’s Sinclair Broadcasting affiliate, KOMO News, produced a special with the death-rattle title “Seattle Is Dying,” drawing national attention to these right-wing talking points.

The TV evening news showed hundreds of stories of gang violence, shootings, and murders. They produced stories about fires, drug dealing, and murder at homeless encampments. The Seattle Times, owned for a hundred thirty years by a single wealthy Republican family, breathlessly hyped these developments on its news and editorial pages.

During the year between the Capitol Hill occupation and the November election, the anti-homeless media campaign had a major impact. The city council, passed a 20 percent cut to the police department budget. But the mayoral candidate who ultimately won in the November election opposes any cut at all. By November, the enthusiasm and commitment which the Capitol Hill Organized Protest (CHOP) had infused into Seattle had dissipated. That explains the electoral defeats mentioned earlier.

The good news is that Sawant’s victory has arrested the momentum of the corporate elite. There will be no stampede to rid the city of its homeless population. The Left still has a strong voice in Seattle.