Reportage of the public meeting in Brussels on hydrocarbons, war and conflicts in the Eastern Mediterranean 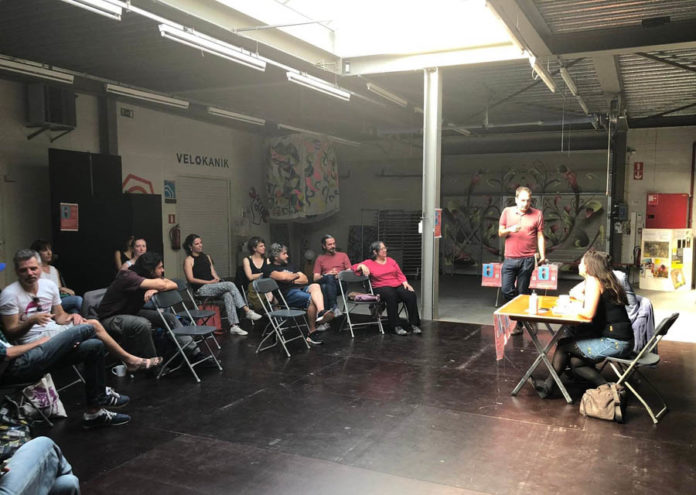 The collective of Greek migrants in Belgium Grec.ques solidaires de Belgique organised an event on Saturday, June 11, hosting representatives of the Greece-Turkey-Cyprus common initiative against mining and war Kazma Birak. The event was supported by ZinTV and the CADTM and was held in the welcoming CBO space, where a number of movement collectives and organisations are based. It was a follow-up to a similar event held in Athens a month earlier. The discussion was attended by 30 people.

In opening the discussion on behalf of the organisers, Marina Kontara spoke about the reasons why the group considered it important to hold such an event at this time in Brussels. Indeed, at a time dominated by the war in Ukraine, the energy crisis, the rising prices of all vital products, but also a strong instability in Greek-Turkish relations, it makes a lot of sense to present the action and ideas of a campaign that unites Greeks, Turks and Cypriots in the struggle against environmental destruction and war. Especially in Belgium, where there is a large Greek and Turkish community.

Ecehan Balta from Turkey unfortunately did not manage to get a visa in time so as to travel and so she sent her speech on video. She referred to the history of the creation of the campaign and the symbolic importance of the fact that a statement was issued on the occasion of the anniversary of the Imia/Kardak crisis. She spoke about the environmental issues and movements in Turkey, but also about how the campaign’s actions have contributed to the movement making progress, but also to informing Turkish society about issues mainly about the Cyprus region. She stressed that the only answer to the belligerent delusions of leaders like Erdogan is the united action and solidarity of the peoples of the region. The energy issue is very important, but we cannot expect the multinationals to solve it for the benefit of the people. We know that bourgeois politicians will not hesitate to provoke a hot incident or a military conflict in order to defend the interests of big capital.

Manolis Savvakis from Greece spoke about how the “hereditary enmity” between Greeks and Turkish people is being cultivated, when in fact there are many elements uniting them. He spoke of the great environmental, geopolitical and socio-economic risks the EastMed pipeline project involves. Although at this stage the project has been temporarily frozen, we cannot be sure at all that it will not be resumed. He also stressed the great contribution of the campaign to improving communication and exchanges between movements in the three countries.

In the discussion that followed, various questions were asked about the characteristics and prospects of the “Kazma Birak” campaign. There was also an interesting exchange about the energy issue and the chances of war/hot incident in the region, the consequences of the war in Ukraine and the prospects in view of the upcoming Turkish elections. The issue of renewable energy sources and the positions of the movements occupied a large part of the discussion.

At the conclusion of the event it was stated by the organisers that the problem of energy resources is very serious, and the answer cannot be found in underestimating the achievements of technology or simply reducing the amount of energy used by consumers. After all, this is a very small percentage of the total amount of energy consumed globally. The debate highlighted that the core of the problem lies in who owns and manages energy and for whose benefit. It is necessary for peoples to be in solidarity with each other and to work together in order for them to gain control of energy production and management for the benefit of the majority. In any case, as the situation in Ukraine clearly shows, ordinary people have nothing to gain from war and geopolitical rivalries.

The common feeling at the end of the discussion was that this was a very good start in the communication between movements and militants from the Eastern Mediterranean and Belgium and a clear intention was stated to have more joint actions and exchanges.