Peru: Opportunities and risks opened up by Castillo’s victory 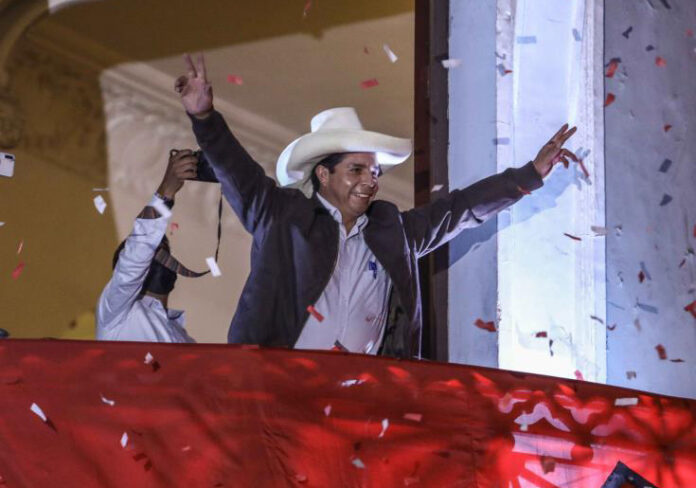 As all indications suggest, Pedro Castillo, candidate of the “Free Peru” party, will be the next President of the country with 50.12% of the vote and with a margin of only 44,000 votes over Keiko Fujimori of the traditional ruling class party, “People’s Power”.

The official announcement by the National Electoral Commission continues to be on hold, as a review of Ms Fujimori’s objections of fraud need to be examined first. For the main candidate of the Peruvian ruling class, the electoral defeat is a headache, also on a personal level, because,  losing presidential immunity will mean that the process of her criminal conviction for involvement in the Odebrecht scandal will be accelerated.[1]

However, the Peruvian and international establishment have already accepted Castillo’s electoral victory, as shown by the Organization of American States confirming a clean electoral process.

Their current bitterness at the fact that a previously unknown teacher from the poor Andean regions will enter the presidential palace, will quickly give way to their attempt to block him and force him to abandon his pro-people promises made during the electoral campaign.

P. Castillo and his chosen staff will be confronted from the very beginning with all the social, economic and political factors that led to his thin victory. It’s not just about the world’s leading death/population ratio from CoVid19. Within the first year of the pandemic, in 2020, those living below the poverty line exceeded 10 million and now make up one third of the population. Add to this the other 11 million Peruvians estimated to be living very close to the poverty line, and 2/3 of society will very quickly raise the issue of anti-poverty measures.

Expectations will be even higher in the regions where the poorest rural and indigenous populations are in the majority, which gave Castillo the most overwhelming victories in both the first and second rounds of the presidential elections. These were 16 constituencies around the Andes, such as Ayacucho, Cusco, Puno, etc., where P. Castillo’s percentages were 80% and above! These are the same districts where the big mining giants have their headquarters, prosper and make huge profits, while poverty is galloping in the country. It should be noted that Peru is the second largest copper producer worldwide after Chile.

It is these social layers that are longing for P. Castillo’s central electoral slogan

“No more poor people in a rich country”

as well as for his campaign promise for a drastic increase in taxation of the mining industries to finance a public spending programme, to come into practice.

The expectations of the lower social layers do not amount to some kind of blind trust in Castillo. His government will be under pressure from the social layers who voted for him. The ruling class parties and their political representatives suffer from an accumulated attrition and there is lack of trust in all the traditional institutions and pillars of the establishment. For the record, excluding the last two interim transitional presidents, all six previous presidents of the country, over the course of three decades, were convicted and imprisoned for corruption scandals and other abuses.

The developments in Peru are very important for the country, but the impact of P. Castillo’s victory on the consciousness of workers and movements internationally cannot be compared to that of the Bolivarian revolution that brought Hugo Chavez to power in Venezuela or of the historic movement that brought Evo Morales to power in Bolivia.

At the same time, the picture of the balance of developments in Latin America remains quite contradictory.

On the one hand, we have Ecuador for example, where the former banker Guillermo Lasso was elected President in the February 21 elections, with a genuine neoliberal programme and opposition to abortion as his banner, while the failures in Venezuela, Bolivia and the defeats of other Latin American movements still weigh heavily on the overall picture. On the other hand, we are seeing tremendous movements in Chile and Colombia, accompanied by signs of a new left-wing radicalisation.

As we have already written in another article the one who was most surprised by his being elected in Peru, is P. Castillo himself.

Consequently, between the second round of the elections and then, while the results became known, he engaged in a struggle to calm the ruling class media, the markets, the multinationals and the international establishment.

He and his staff will find themselves with 37 elected senators in a 130-member Congress, which includes representatives from ten parties.

The ruling class have drawn their conclusions from the fragmentation of the parties representing them in the previous elections, and will work to build as strong a front as possible to block all the pro-people measures that P. Castillo‘s government will attempt to pass.

What will the new President do to oppose them? Will he turn to society in order to mobilize it to impose on the capitalists, policies that serve the needs of the people, or will he compromise and integrate? All the indications so far show that Castillo is far from being prepared for a conflict.

For starters, we’re waiting to see whether the electoral alliance created before the second round of the elections, between “Free Peru” and Veronica Mendoza’s left-wing reformist party “New Peru”, will also develop into a governmental alliance, which will boost the morale of the lower layers of the society, who supported P. Castillo electorally in the first place. It also remains to be seen who the key figures of the new government will be.

At the moment, there are indications that show that technocrats who have served the system in an exemplary way in the past, will be included in the government.

For example, Pedro Franke, a former World Bank and Central Bank of Peru economist, who has played a central role in the final stretch of the campaign, may be a candidate for Finance Minister. His statements and interviews show support for the positions of giant media and of the international establishment. We quote:

“Our idea is not to have massive state interventionism in the economy.”

“Two things are clear: the Central Bank will remain autonomous and we will not increase the public debt to finance our power.”[3]

At the same time, however, there are probably forces within “Free Peru” –which qualifies itself as Marxist, Leninist and “Marieteguist”– which will fight against policies straddling the line between “neoliberalism with a human face” and the old and frayed idea of the “mixed economy”, that is the supposed coexistence of the free market competitive economy with public investment policies and mass state intervention.

The most interesting thing, of course, is what will happen in the real laboratory of class struggle and movements in Peru.

Implementing meaningful reforms to transform the lives of Peruvians requires a head-on confrontation with the Peruvian establishment, big capital and foreign multinationals. The working class and youth have shown clear signs of their being ready to do this. But for this intention to have a potential for success, a political direction is also required. A political force which will step forward and suggest a direction and organize the struggle is absolutely necessary. That will work out a plan to deal with the inevitable counter-attacks of the national and international ruling class. This new leadership of the mass movements will need to draw the necessary conclusions from Chavez’s and Morales’ failures, as well as the defeats of other movements in Latin America. Above all, there needs to be confidence in the working class and the lower social layers. Confidence that they can become the “rulers” of the economy, society and their own lives, with the objective of overthrowing the system. In order to achieve a sustainable overthrow of the system however, an internationalist perspective is absolutely necessary.

[1] Scandal related to illegal donations to her party by the Brazilian multinational construction company Odebrecht SA, which had created a network of bribes spread over 12 countries. This scandal was described by the US Department of Justice as the “largest bribery case in history”.