Pan-European actions by collectives of Greek migrants against repression 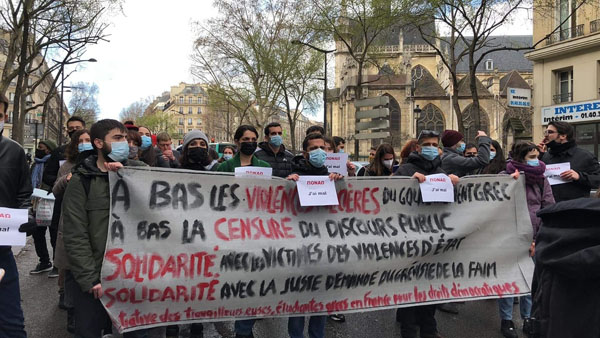 More than 60 people, coming from over 16 European cities, met online, mobilized by the increasing wave of violence and police repression that has been unfolding in Greece in the recent months.

For the past few weeks, actions against police violence have already been organised in several European cities by Greeks living there. In Edinburgh, at least three rallies were organised to inform and raise awareness of the issue among the locals, and slogans and images were projected in a central point in the city. Actions were also held in Copenhagen and Gothenburg, while Greek collectives intervened in local mobilisations against the repression in Paris, Berlin and Barcelona, putting the spotlight on what is happening these days in Greece.

Following these sporadic and autonomous actions, Greek collectives from different countries met online in order to coordinate with each other in a more organised way. A Facebook group was created and it already has more than 1500 members. A letter of protest was initially circulated in this group and information is exchanged.

Collectives and individuals are participating in the group. Some of the collectives already existed during the memorandum years, while others are newly established. Indeed, during the years of the deep crisis in Greece, in many cities, such as London, Amsterdam, Paris, Lyon, Brussels, Barcelona, Berlin, Florence, etc., collectives in solidarity with the Greek movement had been created, working on spreading information and organising protest actions, also trying to act as a link between the movements in their countries and those in Greece. The highlights were the major mobilisations of 2011-12, but also the referendum period in 2015. These collectives included people who had been living abroad since before the crisis, but were significantly enriched by the hundreds of Greeks who emigrated during the crisis years.

In the years following the referendum and the capitulation of SYRIZA, these movements faded away, following the decline of mobilizations in Greece, but in recent years, on the occasion of events such as the murder of Zac Kostopoulos or the trial of Golden Dawn, these collectives have become active again.

This is how this Facebook group was created and through it the online assembly was convened, with the participation of more than 60 people from over 16 cities (even from Sydney, Australia!). In this assembly, anger against the extreme police violence and repression in Greece was obvious, but so was a significant combative mood. There was a general agreement on the opposition of all who attended to the fact that vast amounts of money are being spent on police and military equipment, while health spending is being cut, but also a strong anger against the omerta in the media, the misinformation and climate of censorship, and the destructive environmental policies and laws being implemented.

Thus, Greeks from London, Edinburgh, Birmingham, Dublin, Amsterdam, Utrecht, Brussels, Paris, Berlin, Munich, Gothenburg, Stockholm, Copenhagen, Bologna and Barcelona, we agreed on a joint call for a Europe-wide weekend of action against police violence and repression in Greece on 17 and 18 April.

The coordination will continue and we intend to follow up with more actions, aiming both at resisting repression and authoritarianism, demanding democratic rights and substantial funding for health, denouncing censorship, and expressing our opposition to the destructive new laws on education, environment and culture. At the same time we will try to make this pan-European coordination contribute to the link and cooperation of the movements in the different countries we live in with those in Greece.