On optimism and pessimism: a 1901 text for the new year by L. Trotsky, still inspiring today 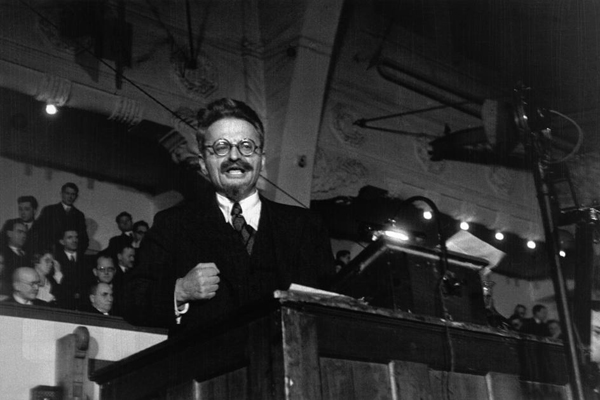 Below we publish the text “On optimism and pessimism”, written by L. Trotsky on 1901 to greet the new year and the new century. In this, an imaginary dialogue between the “optimist” and the “pessimist” takes place.

The optimist, of course, is the revolutionary socialist who is devoted in the struggle for another society. A society that respects all human beings and works for the benefit of its members and not for the profits of the capitalists. The pessimist is the one who sees everything as standing still and repeats that “nothing can change”.

It is true that today we can find more pessimists than optimists in the working class. Who can blame them? A dystopian pandemic, a new economic crisis, a climate crisis of catastrophic proportions, the rise of the far-right and fascist elements, millions of people forced to immigrate, threats of war and military conflicts.

As Trotsky puts it, “hatred and murder, famine and blood…”.

But this is “only the present”. History has never stopped and it will not stop now. The wheels of change are turning and from every defeat come new conclusions, new struggles and new victories. While we have seen severe defeats of movements in the past period, we have also seen important steps forward. Above all, hope at this moment comes from Latin America, in which a number of revolts, mobilisations, political shifts and a radicalisation of consciousness take place.

Trotsky wrote this text at the turn of the century – from the 19th to the 20th. The hopes of the 19th century revolutionaries had not been realised. The new century entered, bringing anything but “optimism”.

But this is what capitalism is like – “hatred and famine, hunger and blood”. That’s how it was then and that’s how it will always be as long as it exists. If we are to be done with the destruction capitalism unleashes on us, we’ll have to fight tooth and nail without hesitation. We cannot and should not accept that the future of humanity is “hatred and famine, hunger and blood”!

More than a century has passed since Trotsky wrote this text. The “pessimist” therefore exclaims: “See? You have been saying the same things for far too long, and still nothing changes”.

It is true that a century is a long time when compared to the duration of the life span of a human being. In the history of humanity as a whole, however, it is but just a moment. The struggle for the emancipation of society is passed on from generation to generation. Each generation has the opportunity to draw conclusions from the defeats of the previous one. That is what we must invest in.

Strikes and mass movements, revolts and revolutions are bound to be on the agenda again. But as long as the movement fails to build political instruments worthy of its militant and revolutionary traditions, some charlatan will be found to fill the vacuum. Therefore, ahead of the new year, our most important task remains this one: the struggle to build a left alternative worthy of the militancy and heroism of the workers’ and people’s movement worldwide.

We wish our readers a happy new year with solidarity!

On optimism and pessimism

On the 20th century and on many other issues

Dum spiro spero! [While there is life, there’s hope!]… If I were one of the celestial bodies, I would look with complete detachment upon this miserable ball of dust and dirt… I would shine upon the good and the evil alike… But I am a man. World history which to you, dispassionate gobbler of science, to you, book-keeper of eternity, seems only a negligible moment in the balance of time, is to me everything!

As long as I breathe, I shall fight for the future, that radiant future in which man, strong and beautiful, will become master of the drifting stream of his history and will direct it towards the boundless horizon of beauty, joy, and happiness!…

And now that century has come! What has it brought with it from the outset?

In France – the poisonous foam of racial hatred*; in Austria – nationalist strife…; in South Africa – the agony of a tiny people, which is being murdered by a colossus**; on the ‘free’ island itself – triumphant hymns to the victorious greed of jingoist jobbers; dramatic ‘complications’ in the east; rebellions of starving popular masses in Italy, Bulgaria, Romania… Hatred and murder, famine and blood…

It seems as if the new century, this gigantic newcomer, were bent at the very moment of its appearance to drive the optimist into absolute pessimism and civic nirvana.

– Death to Utopia! Death to faith! Death to love! Death to hope! Thunders the twentieth century in salvos of fire and in the rumbling of guns.

– Surrender, you pathetic dreamer. Here I am, your long awaited twentieth century, your ‘future.’

– No, replies the unhumbled optimist: You, you are only the present.