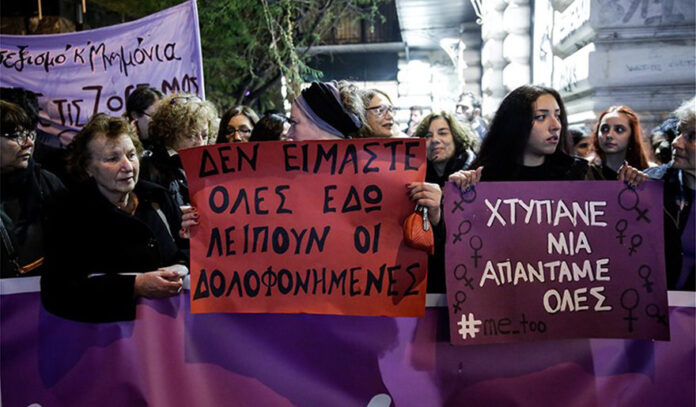 Statement by the Greek feminist group “Free and Combative”

Taking place within a few days of one another, a femicide and a rape has shocked every sensitive person in Greek society. Caroline Crouch was murdered by her husband, while, a couple of days later, a cleaner was raped and brutally beaten in an apartment of the building where she went to work.

In both cases, the police displayed the typical behaviour they do in almost all crimes characterised by the gender dimension: Delay, negligence and sexist behaviour.

In Caroline’s case, they spent weeks looking for “the foreign/immigrant robbers” who had allegedly committed the crime. They were torturing a man from Georgia for 4 days, to make him confess to a crime he had not committed. When it was revealed that the perpetrator was her husband, the then member of the executive committee of the Police Officers’ trade union, S. Balaskas, only came out to declare on camera that the killer was stupid, because, had he called the police immediately after the crime to confess, he would have benefited from preferential treatment, and would only risk a sentence of 4-5 years of imprisonment! Simple and clear instructions for every aspiring femicide perpetrator!

The police attitude was not much different in the case of the cleaning worker who was raped at Petralona, an Athens neighbourhood, a couple of days later. Although the neighbours who helped her escape from her rapist, called the police immediately, the police arrived late at the crime scene. They then waited outside the rapist’s apartment for hours, before they received the warrant allowing them to enter the premises, offering the rapist a large timeframe to escape through a window.

At the same time, the police have been demonstrating tremendous zeal in beating and arresting protesters. In cases they consider “justified”, lacking a warrant hasn’t impeded them from breaking into houses, breaking the law, etc.

Let us recall the raid on the house of director D. Indares [1]. Currently we can witness the insistence by M. Chrysochoidis, Minister for Internal Affairs (ironically called Ministry for the Protection of the Citizens, in Greece), to authorise a special police corps, which will operate inside the universities. Behind the excuse of the fight against “crime”, they are attacking the student movement.

When it comes to crimes against women though, the police systematically arrive late at the spot they’ve been called to, avoid involvement in cases they consider “private”, demonstrate indifference to the victims and even favour the excuses of the perpetrators, like the Police trade-unionist mentioned above. There have been cases in which police officers have prevented women from reporting violence against them.

In this sense, it is no coincidence that, out of the 5,000 rapes committed in Greece every year, only around 150 are reported and even fewer rapists are convicted. It is therefore not an accident that we have so many victims of femicide.

It is not “mental illness”. It’s patriarchy

The same applies to the establishment media. That is why they usually refer to femicide and rape as “crimes of passion”. But no man kills for love. No rapist is “blinded by passion”. And no one rapes or kills because they are “mentally ill”. Incriminating the mentally ill must stop.

A rapist considers women to be sex objects. As a man he believes that he is “superior” to women and that he can “use” women to satisfy his appetites.

A perpetrator of femicide kills because he thinks a woman belongs to him. He believes that marriage or whatever relationship to the woman he may have, gives him the right of control and ownership over the woman. If that perceived status is challenged or goes to pieces, he operates in the way patriarchy has preached for centuries: be violent towards the person who is considered inferior, the person considered an object of property. This violence can go as far as murder.

Our rage needs to turn into a mass movement

A huge outrage has been expressed on the internet against the gender crimes that have occurred in the past few days. Some mobilisations on the streets have also been organised. The movements and the struggles of women that have erupted in recent years in several countries, have sharpened the consciousness of many women and men also in Greece. Thus, within a large part of Greek society discussion has developed and focused on the murder of Eleni Topaloudi and many other femicides that followed [2]. Great pressure has been exerted for the vindication of the victims and for the condemnation of the perpetrators. This process developed further with the Greek #metoo, launched in January 2021, in response to the case of Dimitris Lignadis [3], etc.

We now need to take the next step. A mass movement needs to be launched through the cooperation and united action of feminist organisations, the LGBTQI+ community, the Left and all those who wish to fight against gender oppression and violence. This movement should demand the tightening of the legal framework on abuse as well as rape and femicide and the creation and financing of support structures for victims of gender-based violence. Such a movement will not allow basic rights such as abortion to be questioned, as has been systematically happening in the recent period. Such a movement should also engage in a long-term battle against patriarchy as a whole and the capitalist system that fosters and nurtures it.

[1] Less than two years ago, the police raided the private residence of D. Indares without a warrant, in order to access a neighbouring squat, which they intended to evacuate. When Indares and his family refused them entry their house, the police beat them brutally and arrested them for “resisting the police”.

[2] Eleni Topaloudi was brutally raped and killed by two men on the island of Rhodes in November 2019. The two perpetrators have been charged with the highest possible sentences, further to big movement that developed during the trial.

[3] Dimitris Lignadis, a very well known theatre director and acquaintance of the Greek Prime Minister and the Minister of Culture, is accused of a series of harassment cases and rapes, in many of which the victims were minors. Important efforts to “cover” Lignadis and conceal evidence were made by people around the government and the establishment media. The affair came out in February 2021 and is still open.