Khuzestan Pipe Factory: closed down and sold as scrap metal! 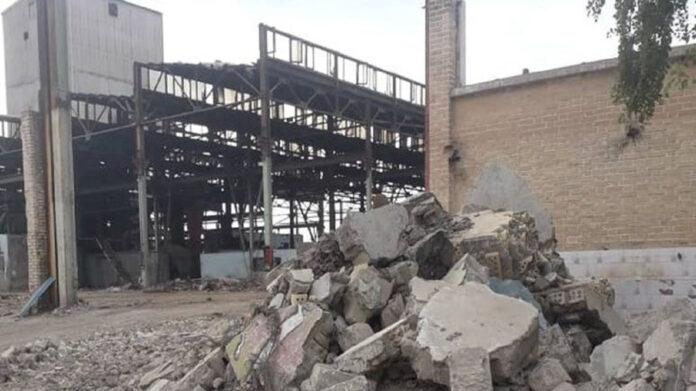 The following is a message by the Khuzestan Vanguard Socialist Workers’ Cell on the destruction of the Khuzestan Pipe Factory in south-western Iran.

The closure of the Khuzestan Pipe Factory, the largest and oldest producer of seamless pipes in the country, and the sale of its parts as scrap is not an auction of a few pieces of iron, but the economic and social capital of the people who continue to pay for the recklessness of some incompetent managers.

The pipe factory, a factory that played an incomparable role in creating employment and the ‘livelihood chain’ of the people of Khuzestan, was unfortunately destroyed and dismantled, while the authorities stayed silent.

During all the days when the traffic restrictions caused by Corona disrupted many of the normal activities of people and the regulatory institutions, persons who had a ready plan and worked round the clock were destroying a local industry: during four weeks dozens of cutters, foreman, crane and truck operators tore the huge Khuzestan Pipe Factory to pieces; the factory that was built over many years and at huge national expense has now turned into a pile of scrap iron after a short period of a few weeks.

Now there is no sign of this factory’s hundreds of unique devices and thousands of machines, and with the sale of the parts, all dreams that the workers of the huge Khuzestan Pipe Factory had of returning to their workplace have been destroyed.

According to information received, the difference of opinion among the shareholders of the factory – some of whom insisted on continuing to operate and produce, and some of whom insisted on selling the land of this factory – caused the huge Khuzestan Pipe Factory to be dismantled within a few weeks, and even its iron columns were converted into smaller pieces by cutting machines and taken out.

The Khuzestan Pipe Factory’s withdrawal from the production circuit has dealt a heavy blow to the local steel industry in Khuzestan and caused industrial dependence and unemployment for thousands of workers.