June 20: 80,000 workers march in Brussels over wages and working conditions 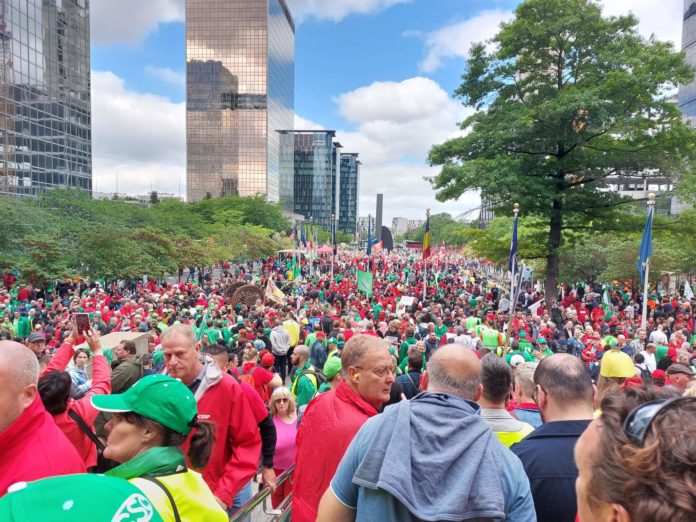 Interview with Donna Litzou, who works at the trade union ACV -CSC in Ghent

Q: On Monday, June 20, a national demonstration was called in Brussels by the unions. Was it successful?

A: Yes, I think it was an important success. The unions calculate that 80,000 workers participated, while the police issued a statement saying 70,000 took part in the march. The march started at Brussels Noord station and ended at Brussels Zuid.  Workers travelled from all over the country in order to take part in it. I, along with other colleges, travelled from Ghent for example. It was clear that the unions did not expect such a turnout when they started planning for this demonstration in January. But the latest wave of price hikes caused by the energy crisis sparked the anger of many workers, who see their income shrink every day. It was important that this strike was called by all three big unions together. The strike led to the cancellation of all flights in Brussels airport- which shows the strength of the workers when they decide to move into action. The mood in the demonstration was also lively and combative.

Q: What were the main demands of the demonstration?

A: The main demand was the scrapping of the law which forces a cap on wage increases. This law was passed in ’96 and allows the government to put a cap on wages, in order to keep them low. So, while inflation today is at 9%, the wage increases are at 0,4%! This is completely unacceptable by the workers. Everything is rising except the wages! This law of course was implemented by the bosses and their political representatives in order to make more profits. When profits were rising at record rates, the workers could not demand higher wages. During the pandemic, the bosses got huge state funding, but the workers still could not demand better wages. Now, the inflation is skyrocketing, and workers are again prevented from demanding better wages. This has to stop!

The unions have started a campaign of collecting signatures in order to force the government to discuss changes in this law. They set a target of 25,000 signatures and gathered 87,000! That discussion will take place in parliament on 29th of June.

There were also demands by different workers on their working conditions. Especially workers in the airports and airline companies demand the lowering of the workload they face. That is the reason why there are more strikes announced in the coming days by workers in this sector. For example, workers in Ryanair have announced a 3-day strike, from Friday to Sunday. Workers in Brussels airlines are also striking.

Q: What are the next steps in the struggle? Are there more mobilisations announced by the unions?

A: It was clear that the unions did not expect such a turnout in the demo. They were planning for a modest event, but the workers from below surprised them! Now, after the success of the demo and the strike, people have started talking about a “hot autumn” in Belgium. Indeed, the feeling among workers is that there should be a fightback. That puts pressure on the unions to act. The problem, of course, is if they will act on time, if they will organise the struggle involving the workers of the rank and file in the decision making, and if they will put forward demands that can lead to victory. Workers in Belgium have huge strength in their hands, they have shown this time and again. This time, an important movement could represent a serious threat for the government, which is based on a very fragile coalition. The problem is usually the union leaderships that are not up for a battle. But anger is growing and this can lead to important struggles, as we saw with the demo on Monday.