It’s time for Spotify to pay 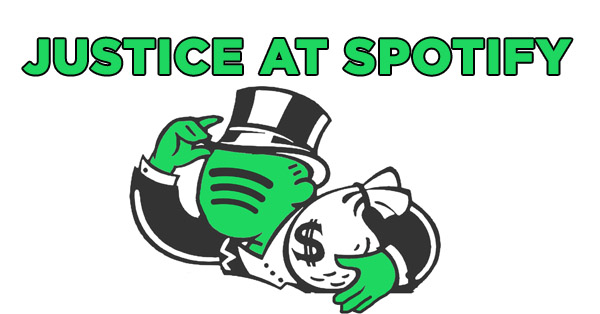 On Monday 15 March, the Union of Musicians and Allied Workers, through their “Justice at Spotify” campaign, held protests outside the offices of music sharing company Spotify in the US, Europe and Australia.

The main demand of the protests is to increase listening royalties from the $0.0038 that Spotify currently offers to $0.01 (that’s one cent).

Since the beginning of the pandemic, musicians and workers in the music industry have seen their incomes decline, as a key part of it comes from concerts and tours, which have been interrupted. Therefore, a lot of musicians rely almost exclusively on music sharing platforms as their main source of income.

Crumbs for musicians, profits for Spotify

The statement by musician and head of the Union of Musicians and Allied Workers, Mary Regalado, sums up not only the extraordinary problems faced by musicians worldwide, but also the exploitation experienced by musicians from Spotify:

“Spotify has been doing musicians an injustice for a long time now, but the pandemic has made this exploitation more intense than ever. The company has tripled its value, but it hasn’t increased its payments to artists by a single cent. Music is work, so we ask to be paid fairly for it.”

In the announcement of the “Justice at Spotify” campaign, already signed by more than 27,000 musicians, it is very concretely stated that based on the 0.0038 of a dollar an artist receives for every single playback of their song, it means that in order for a musician to make $1, a track needs to be played 250 times; in order to pay their rent, their tracks need (on average) to be played 280.000 times, while to earn $15 an hour, which is the basic salary in many US states, their songs need to play 658.000 times!

This injustice comes at a time when music sharing companies reported total revenues of $23 billion for 2020, with the lead once again being held by Spotify, which in December 2020 said it had 345 million monthly active users and 155 million subscribers.

However, Spotify is not only unwilling to concede the one-cent-of-dollar increase that artists are asking for, it’s also wagging its finger at them. Spotify’s CEO, Daniel Ek, said:

What Daniel Ek was essentially doing was blaming musicians’ low paychecks on the musicians themselves, pushing them to release new music more often. This, of course, is something that will mean greater profits for him and his company.

Sharing platforms in the hands of society

It is a fact that in recent years in music circles a heated debate has opened up about sharing platforms, the internet’s assault on music and whether this affects the music industry negatively or positively. The real question, however, is who are the people who control these platforms.

It is a given that as long as these platforms are in the hands of a handful of people whose main goal is to see their profit margins on the upswing, then the majority of musicians will be feeding on crumbs and looking for alternatives to survive.

For music sharing platforms to become functional, fair and democratic, their ownership, management and control must be placed in the hands of artists, workers and listeners, i.e. they should be socialised.

Only then will it be possible to stop playing games for the interests of the big companies on the backs of musicians and allow these platforms to operate in full transparency. And only in this way will the musicians themselves enjoy the results of their works for the good of art itself and for the benefit of society.