Italian elections: The far right in government – another loud warning 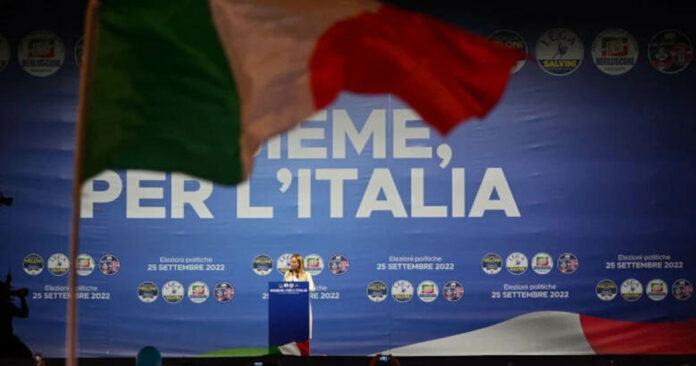 The electoral victory of the extreme conservative alliance, led by Giorgia Meloni of the “Brothers of Italy” party, in the elections held on Sunday, September 25, in Italy, confirmed the worst-case scenario – but one that had been looming for some time now.

The result is another warning of the continuous rise of far-right forces that has been taking place in Europe for several years now. The most recent such development was the rise of the far-right “Sweden Democrats” in the national elections held on September 11, winning second place with over 20% of the vote.

Immediately after Meloni’s electoral victory, far-right leaders from all over Europe (Orban in Hungary, Le Pen in France, AfD in Germany, Vox in Spain, the Law and Justice Party in Poland, etc.) rushed to congratulate her.

The far-right bloc in Europe is significantly strengthened after their victories in Sweden and Italy.

It was not only the “traditional far-right” that rejoiced, but also pure fascists like ex-Golden Dawn former spokesperson Kasidiaris’ “Greeks for the Fatherland” party.

On the other hand, the centre-left Democratic Party was stagnant at 19.1%, while the 5 Star Movement, which had taken 33% in 2018, suffered a huge drop, losing more than half its percentage and taking 15.3% of the vote.

The fact that the “Brothers of Italy” did not participate in the 2021 government formation, led by Mario Draghi, gave them the opportunity to appear as an “antisystemic” force. As a result, they gigantically increased their percentages, “picking up” the losses of their other two allies (Lega and Forza Italia).

The turnout was reduced to 64%, a significant drop compared to the 2018 elections, when the turnout reached 74%. The turnout was the lowest for a general election in 50 years. This is a clear result of the disillusionment in society, on the one hand with the traditional parties of the ruling class and on the other hand with the fact that the Left is virtually non-existent.

The last decade has seen a succession of unpopular and anti-labour attacks, but recently this discontent has become even more pronounced because of the price hikes, with inflation soaring to 9.1%.

Although Meloni in her youth claimed to be a nostalgic Mussolini fan, she has subsequently displayed a more conciliatory/moderate face. Her party does not have assault battalions and groups of fascist thugs, i.e. it differs from neo-fascist parties like Golden Dawn.

Ruling class parties in Europe appear particularly concerned with the rise of the far right. The far right parties do not threaten the interests of the capitalists and the system, but they represent a problem for the ruling class, as they can intensify frictions and conflicts between EU countries, shaking the unstable EU foundations. The case of Orbán of Hungary is typical of this. He pretty much does what he wants by provoking the European Commission, even on the issue of their policy towards Putin.

On the other hand, all those who have now woken up to the danger of the rise of the far right, are the ones who are really responsible for it. What is paving the way for the far right is the constant attacks and austerity policies by the system, which is sending significant sections of the population into despair and provoking reaction.

In this process, of course, the biggest culprit is, unfortunately, the Left, which in Italy is virtually non-existent, let alone offering a way out and a perspective to the working class.

Although Meloni has declared that she will not go into conflict with the EU, and has taken a pro-Ukrainian position against Russia’s invasion, the European establishment cannot trust her.

The far-right economic agenda is no different from that of the traditional establishment parties.

The victim of the policies of the Italian far right will be the popular layers, their living standards and their rights.

Among the first to be targeted by Meloni will be LGBTQI people. Meloni has openly spoken out against the LGBTQI community and is against both same-sex marriage and same-sex couples adopting children.

She has taken a stand against abortion, which leaves open the question of completely basic women’s rights being attacked.

Finally, true to the racist-criminal rant of the far-right, she has proposed a “naval blockade” of immigrants arriving in Italy from North Africa.

There is no doubt that Meloni’s victory will help to further develop a racist and homophobic agenda. At the same time, it is very likely to encourage the actions of the most hardline far-right and fascist groups with attacks on immigrants and LGBTQI people.

The absence of the left

The absence of a massive left force -let alone a revolutionary one- in the Italian political scene creates a huge vacuum for a real alternative to the attacks and the crisis of the system. It thus leaves free space for the rise of the far right.

The Communist Refoundation (Partito della Rifondazione Comunista, PRC), created after the collapse of the Soviet Union and the “social-democratisation” of the former Italian Communist Party, has managed, through the criminal policies of taking part in a capitalist coalition government with the Social Democrats, to disintegrate. The result is a “hard winter” for the Italian Left, which has lasted for over a decade, with enormous frustration in the workers’ movement and the popular strata.

This kind of mutations and compromises of the Left lead people to seek a way out in the supposed radicalism of the far right.

Meloni will take over the government in Italy at a time of great crisis, both internationally and in her country, with a huge public debt to manage. She is not expected to change the formula of austerity policies, which for workers, youth and the poor will mean harsh attacks. The only path they have to follow is that of struggles, through which the processes for rebuilding the forces of the Left can emerge- a Left that must not go back to the same sell-outs and disappointments of the past in order to put the far right in the dustbin of history and open a new chapter in the country.