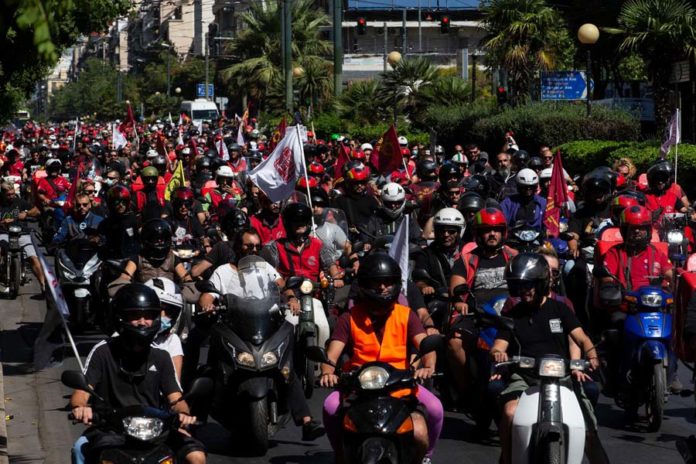 On September 23, one of the biggest food delivery companies in Greece, efood, announced their decision to back off from their threat to force 115 of their workers to become “freelancers”, and also that it will provide the entirety of its workforce with indefinite contracts. This is a huge victory for the workers in efood but also for the whole of the workers movement. Here we publish an article explaining how this happened.

Delivery workers were among the “daily heroes” of the previous period, celebrated in words by the government, the media and the capitalists. They were “the boys with the motorbikes” who kept things going when society was forced to live in lockdown.

And of course, they were the reason for the rise in profits of online ordering companies like efood. For the first year of the pandemic alone, efood saw its turnover soar by 49% to €64.4 million with daily net profits of €86,575.

And how were the workers rewarded for efood’s rise in profits? The company sent an email to 115 delivery workers informing them that their 3-month contract could not be renewed on the same terms, and that the only option they had was to become “freelancers”. This meant that they would have no workers’ rights, no standard shifts or income and so on.

It was this arrogant attitude towards the workers that sparked the movement that led to an important victory.

It is clear that the company made this move after being encouraged by the new anti-worker legislation that the right wing New Democracy government implemented during the lockdown.

The workers publicized the threats of the company, which created a huge wave of support. Social media was on fire, with thousands of posts against the company. Users started to uninstall the app that efood operated on, and rated it with one star (the least favorable). This resulted in a 30% drop in orders within a day.

The company’s reaction in the face of falling profits and discrediting of their brand name was immediate. It sent out a new message which retracted the previous message as “incorrectly worded” and gave employees the option to renew their contract on the same terms or become freelancers only if they wished to do so.

But the workers did not stop there. They called for a strike and motorcades. The mass participation in the strike and the demonstrations curbed the resistance of the company and led to a victory!

Not only did the latest announcement by efood take back the 115 potential lay-offs, it also committed to indefinite contracts for the more than 2,000 delivery workers who were previously on precarious contracts.

This victory has boosted the morale of the efood workers and the delivery workers sector in general. This also extends to the popular strata and young people, who from the very first moment showed their solidarity, supported the struggle and helped this development in their own way. Efood were forced to completely retreat on their attack, and this is in stark contrast to the usual way these companies operate.

So, what were the key features that led to this victory?

The first was the massive participation in the struggle. Most of the workers assemblies in different cities that took place were well attended. The rallies and motorcades on Wednesday September 22 (alongside the work stoppage) were among the largest motorcades ever held, by any workplace!

The second was the united character of the struggle. In Greece there is a long and unfortunate tradition of splits within the union movement and the left. The lack of a united front approach by many currents in the movement holds back struggle and disappoints workers that want to fight. But in this case, there was a cooperation of the two biggest unions of delivery workers: the food and tourism union controlled by the Communist Party (KKE) and the “Assembly of delivery drivers” controlled by the anarchists and the revolutionary left. This feature was very important for the rallying of forces.

Further, within the assemblies there was a real democratic dialogue. The participation of ordinary rank and file workers, discussion of demands and even disagreements played an important role in giving the workers a feeling of actually controlling the struggle themselves. This stood in contrast with the bad traditions of political forces who try to co-opt the movements into their own party agenda.

Another important factor was when workers went on the offensive. The struggle may have started as a defensive one, against the company’s blackmail to the 115 delivery workers, but it adopted a series of combative demands. These demands were not superficial, they reflected the mood of the workers and brought them to the frontline of the battle.

The workers did not stop at the “no to layoffs” demand but insisted that all workers be hired directly by the company, rather than as hired labour for the contractor Manpower, on permanent contracts. And they succeeded!

Finally, the fact that the majority of society was on the side of the delivery workers against the company’s attacks played a crucial role. The applause and the enthusiasm of the people in the streets when the motorcades were passing by was a moving sight. The wide sabotage against efood, led its mobile app rating to collapse to 1 (the lowest possible) and a devastating drop in its orders. This hit the company right where it hurts, in its profits.

Use this victory as a lever

Efood’s total retreat shows the power of the labour movement when it fights with combativity, unity and mass appeal.

Of course the battle will not stop here. It remains to be seen how all of this will be put into practice. The company announced that it intends to hire 7,000 additional drivers by the end of 2022. Under which employment regime does it intend to do so?

While it has pledged to change the “evaluation system” for workers, it has not clarified what criteria the new evaluation regime will be based on. This is something that many workers have expressed huge concerns about, as it leads to competition between them and puts their own lives at risk (for example, when they have to drive faster in order to be get a better “rating” by the system).

And still, there are several demands of the workers that remain unfulfilled. This is why we need to build new, mass and democratic unions in every workplace to be able to continue the struggle with a chance of winning.

This is why we need a unified struggle of all the fighting unions, the social movements and the radical left forces in order to fight against the offensive of the government and the bosses.

Anti-worker practices by the company abroad

The parent company to which efood belongs is called Delivery Hero and is one of the largest German multinationals with an annual turnover of more than €1.2 billion.

The German multinational acquired efood in 2015 for €21 million and in 2018 also acquired another similar Greek company, DELIVERAS S.A., by offering €4.7 million.

Delivery Hero has been accused many times in different countries of anti-labour practices.

In fact, in Canada and Australia, after lawsuits and organized mobilizations, the workers have managed to obtain justice in the courts, winning rights which the employer had been denying them.

It was the use of contractors instead of employees that brought the company significant profits. Delivery Hero thus avoided providing workers with compensation in the event of a lay-off, paying for sick and regular leaves, paying overtime, medical insurance, etc.