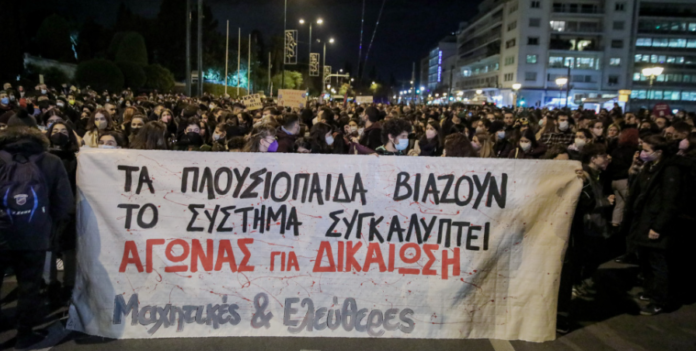 A story about a monstrous rape case broke through the headlines a few days ago in Greece. This has triggered a huge wave of solidarity towards the victim and rage against the perpetrators and the system that protects them.

The story goes like this: Georgia Bika, a 24-year-old woman went to a new year’s eve party taking place in a suite at an expensive hotel in Thessaloniki, where she got drugged and raped by 2 or 3 men.

At some point during the night, the woman became unconscious. When she woke up the next morning, she found herself naked and bruised in a hotel room which she was unable to identify. She also found men’s clothing and other items around the room, as well as sexually stimulating pills and bottles of alcohol.

While the crime happened on new year’s eve, it only made it to the mainstream media headlines two weeks later. It first broke out on social media, as Georgia trusted her story to an activist who helped her work out what happened, and then posted all the information he gathered on Instagram. Only after people in social media made it impossible for the case to be silenced did the mainstream media actually take it up, having no other choice.

On January 19th, Georgia gave an interview to a mainstream journalist, where she revealed her identity, with her name and face uncovered. This took remarkable courage. She told the journalist about her vulnerable situation (both her parents and her boyfriend have died recently) and then explained that she was invited to a private party by someone who works at a café where she often goes. She trusted this man, who excessively insisted on her going to the party, but did not know anyone else in attendance. From the moment she arrived with a 17-year-old female friend, they were both struck by the high-class atmosphere and the flashy style of the less than 20 people who were present, some of whom had come from Athens just for the party. She only had two drinks, one of which someone offered to her, and soon after drinking it, she started feeling unwell and decided to leave.

Georgia went out into the street, but was unable to drive or even get a cab, so she booked a room in the hotel, intending to go there and sleep. While trying to find her room, three men who were present at the party found her in the corridor and took her to another room (apparently the room booked by one of these men). She was unable to resist and soon passed out.

Georgia woke up the day after, trying to remember what had happened. Ηer removed clothes and the bruises on her legs could tell a nightmarish story. She started having memory flashes of that night only several days later. These memory flashes confirmed the story she was able to gather from the situation she found herself in: she had been raped.

Outrage at the judiciary system

Georgia decided to tell the facts to the police and did so on that same day. She said the police treated her with respect and care, but when she was called to recognise the possible suspects, she bumped into one of their lawyers who bullied her and tried to prevent her from filing a lawsuit. Georgia went on camera to denounce the outrageous deficiencies of the judicial system:

According to the investigation carried out by the afore-mentioned journalist and activist, the three men accused of rape are the sons of rich businessmen: the father of two of them is Coca-Cola’s representative in Greece. It also appears that this is not an isolated incident. After Georgia went public, at least three more women publicly stated that they were also assaulted or raped at similar parties.

There is some information that implies the existence of a whole criminal network that targets young vulnerable women and brings them to parties and events, where they are drugged and abused. The alleged network might possibly not be limited to Greece, but also operate in Cyprus and probably other countries.

The enraging deficiencies of the police and judicial system are not isolated to this case. The forensic judges in Greece are only available during office-hours: this means that if a rape occurs on a Saturday evening or on a public holiday, the victim will have to wait for two or three days to get examined, and clearly should not wash herself before! There are even regions where there are no forensic judges, so the victims need to get in a car, drive for a couple of hours and go to another city! Needless to say that when Georgia testified to the police, no psychologist was present. A psychologist was only present at her third testimony with an interrogator.

Attempt at a cover-up

The long silence of the mainstream media is also suspicious. Social media was buzzing for days about the case before it came out to the mainstream media. This was often in a completely one-sided and non-empathetic way: the names of the accused took too long to become public; the party was called a “pink party”; criticisms about “why the victim went to this party”, “how much she had drunk” and more ambiguous comments suggesting victim-blaming, were common..

A lot of aspects about this case and the way it has been treated by the judicial system and the media suggest that efforts are being made for the facts to be concealed. We have seen this before: when a member of the upper class, a businessman, a politician or any kind of powerful rich person are involved in such a crime, an orchestrated omertà is launched, aiming at protecting the accused and at transferring the blame to the victims [In this respect, the media coverage of the LGBTQI activists’ Zak Kostopoulos / Zackie Oh!’s assassination is very illustrative].

It was clear from the beginning that the perpetrators had the attitude of being untouchable because of their wealth and political connections. One of them, uploaded a selfie in his instagram account where he was holding a newspaper with the accusations against him and laughing!

Women and men of the feminst movement in Greece, and also just ordinary people that have had enough with rich men getting their way, begged to differ.

A feminist mood in Greece has been growing bigger and stronger over the past year. The latest phase started when Sofia Bekatorou, an olympic sportswoman, publicly announced that she was raped over 20 years ago, by a high-class member of the Sailing Confederation.

Her brave initiative launched a huge #MeToo wave in Greece, as hundreds, and even thousands of people, originating from areas like art, sports, media, academia, came out as victims of assault, abuse or rape in their workplace. Very high-profiled personalities are accused as perpetrators, some of them being very close to the Prime Minister himself. Again, we saw, a very active campaign to conceal the facts or mislead evidence was launched, making the demand for justice very difficult to be achieved.

This triggered an incredible feminist wave in the country. News about femicides, domestic violence, sexual assaults, rape and any kind of abuse, came to the surface and made it to the headlines, thanks to the movement’s pressure. Several important demonstrations and actions took place in Athens and many other places. A campaign for introducing femicide into the penal code has also been launched.

The biggest feminist demo in Greece ever!

This time, Georgia Bika is not alone. Soon after the news broke out, a huge wave of solidarity was triggered in both social media and the streets, encouraging other victims to come out and speak out about their suffering.

On January 21st, Georgia was called to testify again at the judicial authorities. A big solidarity demonstration was organised in Athens, while smaller actions took place in other cities; 6,000-7,000 people took to the streets of the capital, demanding justice for Georgia and all other victims, denouncing sexism and abuse. Never before have we seen such a big number of people, both men and women, demonstrating for feminist matters in Greece. As the demonstrators said: fear is changing sides.

The slogans that dominated the demo were:

“You have the money, we have a voice, no to the cover-up of every rapist”

“When thousands of rapes are reported, the court says- it was your fault”

“Cops, tv, judges, all cover-up for every rapist”

“Even if I wear my skirt on my head, when I say no it means that I don’t want to”

It is of course very important that the victims are empowered to come out and speak up about the crimes they have suffered, and demand justice.

The feminist movement needs to demand that the judicial and police authorities work properly, treat the victims with respect and care – contrary to what happened in Georgia’s case. At the same time it is of utmost importance that public services receive the necessary funds and experienced staff in order to be able to offer to the victims of violence, abuse and rape the appropriate psychological and material support.

And of course, there should be a generalised struggle to put an end to the system that creates and nurtures these kinds of behaviors.

The feminist movement in Greece has been speeding up in the past year and this is certainly one more reason for Georgia Bika being so brave. We shall continue on this path with even more determination!