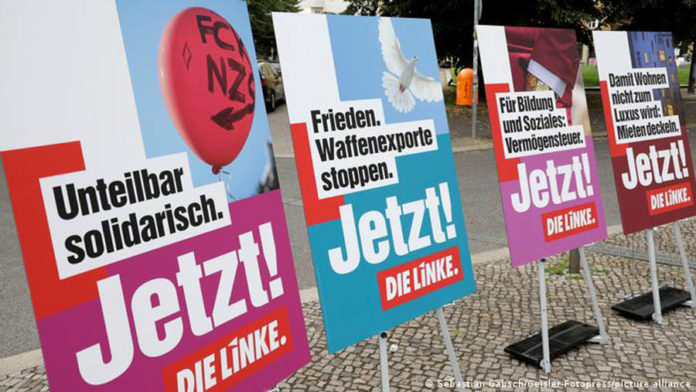 The SPD (“center-left” Social Democratic Party of Germany) emerged victorious from the German parliamentary elections last Sunday with a narrow lead in the polls. The left-wing party Die Linke suffered a bitter defeat.

At the same time, the majority of Berliners voted “yes” in the referendum on the expropriation of real estate companies that took place alongside the general elections.

On 26 September 2021, according to the official provisional final results, the SPD and its candidate for chancellor, Olaf Scholz, achieved a victory with 25,7% of the vote. This means that Scholz will most likely succeed Angela Merkel as German chancellor.

While the SPD increased its votes by 5,2%, the CDU/CSU lost 8,8%, compared to the results of the last elections in 2017. This is the worst result in their history since the elections of 1949.

The Greens achieved their best result ever, with an increase of 5,4%. However, even though they got an important 14,8% of the vote, they fell short of their expectations. In the April opinion polls, the Greens were still at 25% and had even set their sights on the chancellorship with their candidate Annalena Baerbock.

The liberal Free Democratic Party (FDP) remained relatively stable getting 11,5%. On the other hand, the far-right Alternative for Germany (AfD) lost 2,3%, but still got 10,3% and is the fifth strongest party in parliament. It is also the strongest party in eastern states such as Thuringia and Saxony.

The left-wing party Die Linke came out of the election as the main loser. It crashed to 4,9%, losing almost half of its 2017 votes.

On top of that, it failed to achieve the 5% threshold. It was only able to enter parliament through the clause of “direct mandates”. There is a special clause in German electoral law according to which, if a party wins at least three of the direct mandates, they are entitled to getting more MP seats. In Germany, a direct mandate is a parliamentary mandate won by the candidate who receives the most votes in a parliamentary election in a certain constituency.

The bourgeois media likes to portray these dramatic losses of votes for Die Linke as the result of the party’s “radical” policies and to qualify it as a rejection of such policies. But this is wrong on two counts.

Firstly, the policies pursued by Die Linke are unfortunately not “radical” but actually moderate.

Secondly, the claim that radical policies are rejected is also untrue. For example, 2 days before the elections, over 250.000 people were on the streets in 11 cities in Germany taking part in the climate strike, demanding radical action on tackling climate change.

The spectacular success in the referendum on expropriation of real estate corporations in Berlin, which took place alongside the election to the Bundestag, is another proof that radical policies are not rejected by society. 56,4% of the voters voted in favor of the expropriation of real estate corporations! According to the wording of the referendum, the future senate is now called upon to draft a law for the expropriation of around 240,000 flats in Berlin. All private housing companies owning more than 3.000 flats would be affected.

The defeat of Die Linke is much more related to the adjustment efforts of its right wing, which represents the majority in the party leadership. Under the slogan “a left majority in the parliament” they have been trying for a long time to incorporate Die Linke into the core of the establishment parties, instead of pursuing a consistent policy in favor of the working class. In doing so, they want to present themselves as capable and worthy of participating in government with the SPD and the Greens at the federal level. This is creating illusions among the workers and youth that the pro-capitalist SPD and Greens, who are largely to blame for the current misery faced by wider layers in society, are “left-wing”. This in turn creates suspicion amongst the more radical layers against Die Linke for being too moderate.

There are three possibilities for a coalition government. One is the so-called “grand coalition” consisting of SPD and CDU/CSU, which is already, at least in words, ruled out by both sides. Another is the so-called “Jamaica coalition” led by CDU/CSU with the Greens and FDP, which would mean that the election winner SPD would be excluded from the government. A final option, which seems the most likely as things stand now, is an SPD-led, so-called “traffic light coalition”, consisting of SPD, the Greens and FDP.

Whatever coalition or constellation is formed, it will not pursue a consistent policy against the climate crisis, nor will it implement substantial tax increases on corporations or other policies that improve the living standards of the working class.

If Die Linke wants to learn the lessons from this electoral disaster, they should focus on building a consistent opposition both in and out of parliament, based or radical left policies which reflect the aspirations and provide a perspective to the new movements and the new radicalized layers. In this way, they could recover from this disaster and be of great help in building a strong movement in the interest of the working class, against a possible SPD-led government, the capitalists, and the right wing. If they were to do this, Die Linke would need to abandon their present course and clearly distinguish themselves from all the pro-capitalist parties, adopting a program based on overturning the system of greed and establishing a truly socialist society to serve the collective needs of the people.