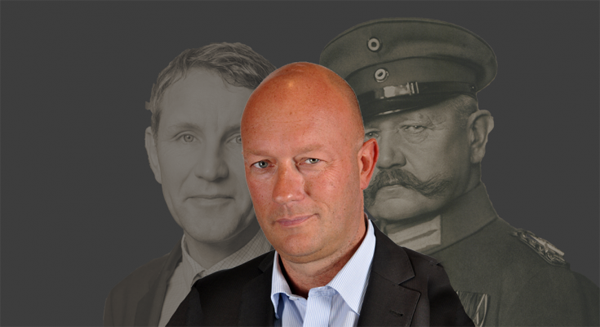 This is a slightly updated version of the article by the Editorial board of Sozialistische Alternative — SAV, the ISA in Germany

The swearing in of the new state Prime Minister, supported by the votes of the far-right “Alternative for Germany” (AfD), in the German federal state Thuringia is a warning sign. It follows last October’s election, after which it was assumed that the coalition of Die Linke (Left party), the Social Democrats (SPD) and the Greens, which held power before the election, would continue. But the splinter party of the rich, the so called “Free Democrats” (FDP), was unexpectedly voted into office by the far-right AfD, in which notorious fascists like Björn Höcke pull the strings.

The AfD is triumphant over this manoeuvre and present themselves as brilliant tacticians, the mouthpiece of the fictitious ‘majority’ in the fight against what AfD Chair, Jörg Meuthen, calls the “left-red-green-1968 contamination of Germany”.

With just a few hours of preparation, thousands took to the streets in dozens of cities to express their disgust. In Erfurt, 500 came out spontaneously onto the streets, in Jena in Thuringia there were 2,000, with over a thousand each in Berlin and Hamburg. In Cologne, demonstrators succeeded in entering the FDP parliamentary group meeting in the city hall.

Public pressure quickly became so great that Thomas Kemmerich, who had been elected state Prime Minister, was forced to announce his resignation. However, the farce continues.

Die Linke (the Left Party) is calling on the CDU to vote for their leader, Bodo Ramelow, to continue as Prime Minister, while the AfD is saying they may vote for him, which would be unacceptable. While the federal CDU leadership wants new elections, the Thuringia CDU are opposed, knowing they would lose.

Memes and posts immediately circulated on the internet, comparing the manoeuvring in the Thuringian state parliament to the support given in pre-war Germany by the conservatives to the Nazi party. Indeed, comparisons with the Weimar (pre WW2) period are inevitable. Then, as now, bourgeois parties played down the danger from the far right and increasingly adopted the racist propaganda of right-wing populists. The CDU and FDP in Thuringia, whose main hatred is directed at Die Linke, SDP and Green coalition led by Bodo Ramelow, acted opportunistically. In effect, it was this that enabled the AfD to land this coup.

From Weimar to Erfurt?

Does this mean that we have come one step closer to a fascist takeover of power? Without downplaying the danger of the far-right, nor ignoring the violence which fascists cause, fascism is not the form of government the ruling class currently prefers. Under normal circumstances, parliamentary democracy offers better conditions for the optimisation of profits. The ruling elite can, with relatively little effort and a limited use of force, integrate broad sections of the population into a system that harms their very interests. Such a system offers diverse and flexible possibilities to enforce the interests of capital, even if the voters sometimes have different ideas.

In such a “democracy”, fascists and right-wing terrorists are useful for the intimidation of left-wing and unwanted minorities. But big business does not want to give them full power to govern, or to let an unrestrained political figure like Höcke interfere in their business. The ruling class only resorts to such drastic steps when its power is seriously threatened. This was the case in the 1920s and 1930s, when the working class in many regions seized power. A ‘red-red-green’ government under the soft-left leadership of Bodo Ramelow did not have nearly enough potential to threaten their rule.

However, the CDU and FDP in Thuringia have become increasingly dependent on the AfD. They feared that at each new election, the AfD would win more votes and deprive them of their lucrative jobs. In the short term, this gave the AfD the opportunity to push the two conservative parties in the direction they wanted. But this has caused a heated discussion within the CDU. The federal leadership doesn’t want to be connected with AfD, but locally the rank and file are in favor of working together with the AfD.

The federal leadership of the CDU and FDP distanced themselves from this decision, and are appealing for the “unity of the democrats”. But this is misleading. The FDP was never an anti-fascist party, but the “small party of big business” and gave many former Nazis a political home after the war. Those who understand their current behavior as a “betrayal of their values” are mistaken about what the values of the FDP actually are. The party is led by similar petit bourgeois and bourgeois layers as the AfD, and like the AfD, it stands for social cuts, deportations, lower wages and pensions, but with a liberal façade.

In the same way, there is no reason to breathe a sigh of relief based on the idea that “the CDU and FDP are not that bad after all”. The taboo which was previously in place, under which the major parties refused to work with AfD, has been broken. The boundaries of what is thinkable and feasible have been shifted to the right. Although it is currently not appropriate for the federal party leaderships to pursue such open and extensive cooperation, this does not change their willingness in principle to tolerate and lean on the right populists and their activities.

At the same time, the AfD has exposed what they really mean, when they talk of being an “anti-establishment party” in its fight against the “old parties”. By supporting Kemmerich, they helped an established neoliberal from an “old party” into office, who would, if he stayed, have carried out social cuts, privatisation and deregulation and who himself went to the East as a Western robber baron in order to enrich himself there after the fall of the Berlin Wall.

Social polarisation and the increasing decline in the importance of the traditional “people’s parties” mean that stable, reliable majorities are becoming increasingly difficult to establish. Germany currently has a 6-party system, which incidentally is another parallel to the Weimar Republic. Since the bourgeoisie cannot fully trust either the AfD or Die Linke, it is inevitable there will be further crises and inability to form majority governments in the future. Indeed, following the resignation of Kemmerich, the crisis in Thuringia, as well as in the CDU nationally is still continuing.

Such crises can also be observed in other European countries. Where old parties are disappearing, new “movements” are entering government like comets, before quickly burning out again. This reflects the general dissatisfaction with the status quo and a massive loss of confidence in the established parties. In practice, now it makes little difference whether a social democratic or conservative government is in power in many instances: the standard of living still stagnates at best and social insecurity increases. It is these circumstances that lead to the rise of populists and protest parties. For capital, which above all wants stability for its business, this is far from desirable.

Die Linke under pressure to adapt

The bourgeois parties will now use the situation to put pressure on Die Linke to adapt even further. According to polls, a new election would result in the Die Linke gaining strongly and the CDU losing. The CDU is therefore manoeuvring and trying to find a solution that is acceptable to them without new elections. The central concern of the CDU is to marginalise Die Linke politically, despite their strong electoral support, and to force them to beg for admission to “the community of democrats” by renouncing key Left demands.

In the last elections, Die Linke received 31% of the vote in Thuringia. In new elections, they have the chance to achieve an even better result. A central question for a left-wing party is always how it uses such election successes for social mobilization to implement its political demands and, in the current situation, how it can fight the right-wing populists and neo-Nazis. However, the record of the government under Bodo Ramelow does not differ fundamentally from that of governments in other federal states. Like other state governments, it has accepted the restrictions on public debt and other neo-liberal regulations, has deported refugees, and has effectively dropped its demand to dissolve the “Verfassungsschutz” — the German domestic secret service in the very home state of the “National Socialist Underground”, the far-right terrorist group, that apparently operated under cover of the “Verfassungsschutz”.

If a left-wing party fails to distinguish itself from the SPD and the Greens, if it participates uncritically in government with them, and if the living and working conditions of employees and the unemployed do not change fundamentally in the process, this will only help to strengthen the AfD. Only a strong left wing can defeat the right. It is therefore urgently necessary for Die Linke in Thuringia to cease their acceptance of the bourgeois rules.

Many people are rightly alarmed at the events in Erfurt. But they should act as a wake-up call to learn the most important lesson from the Weimar Republic: at the root of fascism lies capital. We can bring an end to racism, misogyny and homophobia once and for all only when we overcome their social basis, capitalism.