Fighting for a new Left in Turkey, Greece, Cyprus – report from the Internationalist Camp in Cyprus 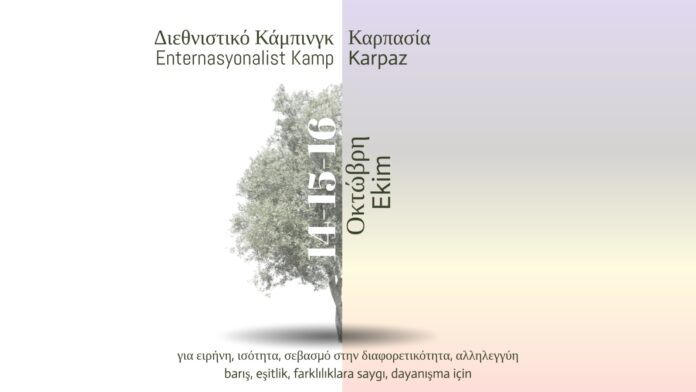 It was a great success, especially as it was able to gather comrades not only from NEDA, Xekinima (NEDA’s sister organisation in Greece) and Internationalist Standpoint (the international initiative in which both organisations participate) but also other left-wing activists from the north and south of Cyprus as well as delegations from the Workers’ Party of Turkey (TiP) and DiEM25 (which operates in the south of Cyprus). In total 34 comrades participated.

Apart from the central discussions there was room for a lot of personal discussions with comrades from different countries. The whole atmosphere was extremely comradely and positive. All this was combined with the self-organised kitchen, the beautiful wooden village and the amazing beach of Agios Fylonas, as well as the very nice music event performed by Lucio, Husnu and Varol.

The welcoming remarks on behalf of the organisers were given by comrades Athina Kariyati and Marina Payiatsou.

The discussions were very interesting and in-depth on all three main topics, which were:

The leadoff on the women’s and LGBT movement was made by comrades Ruyam O. (on behalf of NEDA and Rebel and Unchained from northern Cyprus), comrade Cosku C. from Turkey (member of TiP), and comrade Rufet S. (a lawyer and activist for women’s rights in northern Cyprus).

The discussion on the political developments in the Left had four opening remarks: comrade Ece B. from TİP, comrade Athina Kariati from NEDA and comrade Demos Ioakeim from Diem25 and Antreas Pagiatsos from Greece.

The discussion on building the new Left

Of course, there were also differences between the different organisations and comrades – something that would be not only inevitable but is also very healthy. There was, however, basic agreement in all discussions, with minor differences and differences of emphasis. A very important feature was that there was an understanding by all the participants that left organisations ought to work together, regardless of and beyond their differences with each other.

Prominent in the discussion about building new left formations that have a consistent anti-capitalist programme was the update on TiP’s course in Turkey.

TiP is a new left formation (in fact it is a reconstitution of an old left socialist party with the same name from the 1960s, which was persecuted by the regime and declared illegal) with strong radical characteristics. Indicatively, its programme refers to revolutionary socialism as a key ideological/political feature necessary to overthrow capitalism and build a socialist society. Another very important feature of TiP is the fact that it is open to collaboration with other parties of the mass/reformist left, such as the pro-Kurdish leftist HDP party. Based on such principles and policies, TiP has been able to increase its forces from a few hundred when it first emerged in 2017 to 10,000 members today. The TiP experience offers important and useful lessons for the Greek anti-capitalist left, which is characterised by strong sectarianism.

The information from the comrades in southern Cyprus about the proposal of NEDA for the cooperation of the organisations of the extra-parliamentary left with the aim of a common candidate in the presidential elections was also very interesting. This is because once again AKEL, which speaks in the name of the workers and the Left, has decided to support a man of the establishment, Andreas Mavroyiannis. Although there are obvious difficulties in moving forward with the proposal for a common candidate of the anti-capitalist left, it has provoked serious discussions in the ranks of the extra-parliamentary left opening the prospect of continuing the effort to form a distinct left pole, beyond and outside AKEL, to intervene in developments. It is important that DiEM25 agrees with this proposal and will seek joint actions with NEDA in this direction.

Finally, the Greek experience could not be missing from this debate. The process of a small party of 3% to 4%, as SYRIZA was, could take off under the conditions of economic and social crisis and take over the government, only to capitulate in the end by completely selling out every leftist idea and vision, was taken up in the discussion. The rise and “fall” of SYRIZA, from a party of the radical left to a party of the system, has had a strong negative impact not only in Greece but also internationally. The conclusions about SYRIZA are important for the effort to build new mass organisations of the labour movement and youth in every corner of the planet.

Already discussing about next year!

NEDA’s Internationalist Camp served to charge the political batteries of comrades and friends and strengthened the relations between them. In the end, many would have liked it to last longer. So, there are already discussions in preparation of an even better camp next year!