Chaos in Kabul, after 20 years of “winning the war on terror” 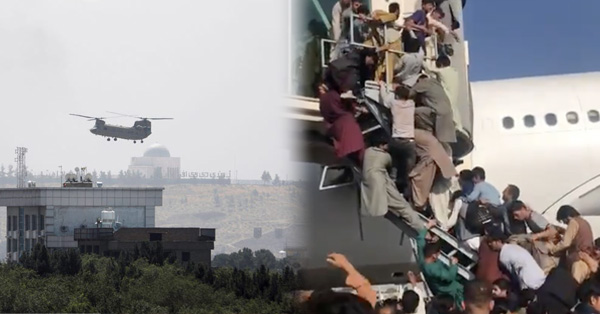 Chaos reigns in the streets of Kabul, as the government has fallen and US military forces are hastily withdrawing. At the present time the Taliban are celebrating their victory in the war and declaring the “Islamic Khalifate of Afghanistan”. This is a very big defeat for American imperialism and its allies, but also a black day of horror for the people of Afghanistan…

Exactly 20 years ago, immediately after the attack on the Twin Towers by Al-Qaeda, the then US President G. Bush Jr. declared war on Afghanistan as part of the “war on terror”. It was an attempt to change the image of the superpower which was looking weak and to assert its global dominance. “Every nation, in every region, now has a decision to make. Either you are with us, or you are with the terrorists.” he had said, and globally almost every government went along “with him”. 136 countries offered military or other assistance to the intervention in Afghanistan.

The Taliban quickly lost the battle, and Western imperialist forces settled into the country, creating a puppet government of local warlords who were enemies of the Taliban. They also began the “democratisation” of the country.

What has the US-led coalition achieved in these 20 years?

In the distant 2001, when we described such a prospect, the apologists of the system called us crazy. They told us that there was no force that could stand up to the US, that it would be  a “walk in the park” for the imperialists. They also claimed that in months, maybe a few years, they would finish the job and Afghanistan would finally become “civilized”.

“Who has to gain from this war? Is it the people of Afghanistan who will get rid of the Taliban? Will it be the Muslims of the world who will “get rid” of the fundamentalists?  Or will the peoples of the West get rid of the terrorism that threatens them? None of these things! The war is being fought for the prestige of the USA!

…The collateral damage of this war… will be measured in hundreds of thousands, if not millions of victims…

…after the war begins, the number of starving people is expected to rise…

…but the “civilized” West closes its doors to desperate Afghan refugees…

…that the imperialists will be able to overthrow the Taliban government seems most likely. They might even eliminate Bin Laden. But what problem will they solve? They themselves know that the Northern Alliance, in which they are investing for the next government in Afghanistan is nothing but a gang of bandits… What kind of stable government can they be?

…After their possible fall from power, the Taliban will retreat into the mountains from where they will continue their war. That means civil war without end…

…But even if the US achieves all its military objectives, the stabilization of Afghanistan will be impossible… because stabilization requires leaps in economic growth, which on a capitalist basis is impossible…

…Even if the imperialists are finally able to kill bin Laden, their victory will be pyrrhic… it is certain that there will be countless thousands of young Muslims who will consider it an honor to die in his name, taking with them as many “infidels” as they can…

… Western governments have seized the “opportunity” of terrorism. Anti-terror legislation: that is their “answer” to terrorism. Every phone call can be monitored. Every email to be registered…”

Well, someone could say, its too much to ask from them. Even Biden, in early July (!!!) stated that the evacuation of the US military would be “secure and orderly,” and that “the likelihood there’s going to be the Taliban overrunning everything and owning the whole country is highly unlikely”…

The horror of the Taliban

The total failure of the USA – which of course reflects the decline of the global domination of American imperialism – does not at all mean that the Taliban represent anything progressive. On the contrary, they represent one of the darkest and most medieval pages of modern history.

The Taliban and Al Qaeda were funded by the US and its allies as a counterbalance to the leftist government that took power in ’78 and the Soviet invasion of ’79. Later on, however, they turned against their patrons and sought autonomy.

The regime they imposed from ’92 committed atrocities such as: public executions, cutting off the hands of those caught stealing, the imposition of the burqa, a ban on girls’ education, a ban on women working outside the home, a ban on women going out without a male escort, etc.

These memories probably explain the desperation of tens of thousands of Afghans in trying to leave the country. There will certainly be a huge new wave of refugees in the coming years. So, when governments and the far right tell us that refugees are an “epidemic”, we will tell them that they are responsible for it! Also, that having broken everything in this country, they are obliged at least now to ensure the safe passage and settlement of refugees fleeing for their lives.

From Scylla to Charybdis

All this does not mean that the Taliban will have a stable government; they have nothing to offer the population except poverty and oppression, they have no solutions to the problem of the ethnic minorities that make up the country, and of course they will face the reaction of the Western imperialists who will want to be seen to be “doing something” to save face.

The people of Afghanistan and the whole region have paid with blood for the domination of both the fundamentalists and the imperialists.

The only, difficult but unique, solution for them is to get rid of both oppressors in order to finally live a free and dignified life. For them to fight for the creation of an independent movement of the working class and the popular strata, against interventions, occupations, repression and exploitation. To fight for a socialist society.

During the last few years in the wider area there were important struggles: the revolts in Lebanon and Iraq, the general strike in India, workers strikes and the women movement in Iran, the Kurdish resistance in Syria, the environmental movements of Turkey, the struggle of the Palestinians against the occupation and many more. These movements should work together and face the “double enemy” that the people of Afghanistan face also- thus sending a message of struggle and hope!