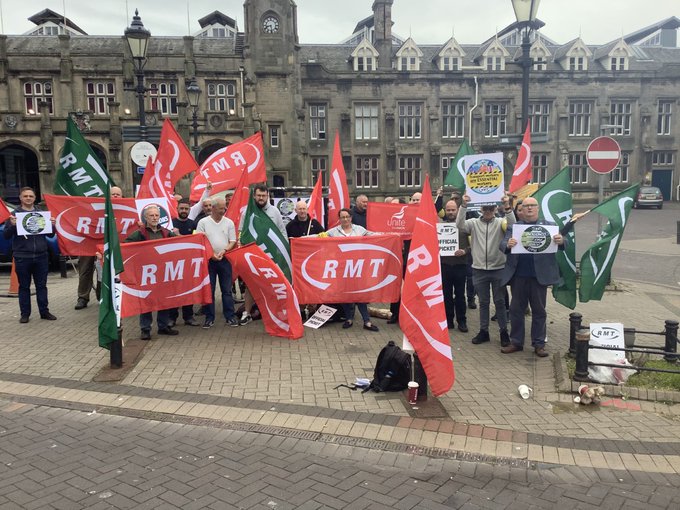 Workers from the RMT (Rail Maritime Transport Union) are engaged in a series of one day strikes. The first day of action took place on 21st June and there a further strikes planned for the 23rd June and 25th June. The 40,000 members voted by 89% for strike action with a 74% turnout, showing a huge level of support from the members of the union.

The strike is not primarily about pay, but is a response to attacks on worker’s conditions of employment and security of employment. Grant Shapps, the Tory transport secretary, has accused the rail workers of refusing to modernise their working practices. The RMT is clear. They are prepared to modernise working practices providing there are no compulsory redundancies. They are also clear that within the negotiations, they are prepared to be flexible around pay, but are not prepared to accept the 3% offered by the employers.

Mick Lynch, the general secretary of RMT, maintains that the conditions of employment of RMT members have been hard won over decades and they are not prepared to give ground to the employers without a serious and detailed set of negotiations. John Stewart (RMT Yorkshire) stated that there have always been adjustments to conditions and that new technologies are being deployed all the time but that this is not a one-way-street.

A lot has been made by the government of the income of railway workers – quoting an average median income for a train driver at £54,000 per annum. Very few RMT members are train drivers and the average income of RMT members is £33,000. Train drivers mainly belong to the ASLEF union. However, comparing train drivers pay to nurses pay, which averages £31,000 a year, is an attempt to devalue the role played by train drivers. Their pay has been won through struggle and the nurses are under paid and under-valued. Awarding the nurses a symbolic collective George Cross because of their work during the covid pandemic is not a substitute for decent pay and conditions. The Royal College of nurses needs to examine its role in avoiding fighting for better pay and working conditions and carries a responsibility for the poor pay of nurses.

The late Bob Crow, (ex-general secretary of the RMT), was very clear in his assertion that train drivers had won their pay through struggle and that they earned what they were paid and more. It’s sickening to hear the government and the BBC blame wage rises for rising inflation, when the evidence is clear that inflation has very little to do with wage increases. Wages in general have not kept pace with inflation up to the current time. The levels of in-work poverty in the UK is testament to that, with nurses reported as having to resort to food banks.

John Stewart (RMT Leeds City Branch Secretary) also made the point that the rail industry is moving towards a cost-benefit model when it comes to safety and that workers are not prepared to put the public or themselves at risk for the sake of profit. It is also true that the numerous rail companies and Network Rail are being steered remotely by the treasury. They are being clearly instructed to engage in quick and radical restructuring as well as keeping pay settlements to about 3%.

The government is also rushing a bill through parliament that would allow agency workers to break strikes, rather like during the general strike of 1926, when volunteers ran bus services etc. In an interview on the Today Programme (BBC), journalist Nick Robinson was pushing Grant Shapps to accelerate this bill – showing clearly a biased perspective on this issue. He certainly didn’t push Mick Lynch towards more radical action in an interview on the same programme. The BBC focusses on the inconvenience to the general public which the strike produces in a tone that is positively apocalyptic. This is an attempt to push the listeners to take a position against the strike. On the picket lines on the first day of the strike, in York at least, this was certainly not the case. RMT pickets were cheered and applauded and throughout the day with only one negative comment being made. Several contract workers (ex-miners) also refused to cross the picket line.

This is the beginning of a summer and autumn of struggle with ASLEF, TSSA, PCS, CWU and other unions balloting for strike action during the coming months. This is on top of smaller struggles by bus drivers, hospital workers, refuse workers etc. It is an opportunity for workers to demand more from employers – for the profits to go to the workers and for the huge profits made by the billionaire class to be cut across. The need for struggle is everywhere and the need for unity is imperative. The We Demand Better march on Saturday, which was called by the TUC should be the start of mass action to bring down this rotten government and build a radical alternative to the Labour Party, which has betrayed the working class and no longer represents their interests.