Bosnia and Herzegovina: political instability grows, while nationalism is lurking 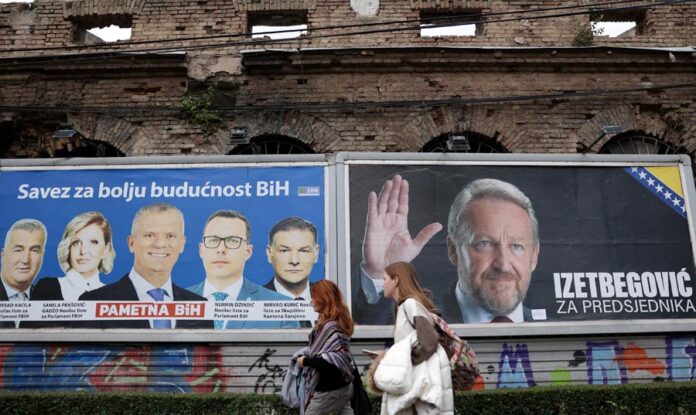 The State of Bosnia and Herzegovina and its history

A series of gibberish institutions such as the House of Peoples, the tripartite presidency together with an administrative division into cantons, each of which has its own parliament, independent governments of the two separate national entities, the Federal Court, etc. constitute the most complex state system on the planet.

This state system was a result of the Dayton Agreement which ended the Bosnian war between Bosniaks, Croats and Serbs, that lasted from 1992 to 1995.

The Dayton Agreement was a compromise between the newly-formed ethnic bourgeoisies that came to power after the collapse of the centrally planned economy of the formerly united Yugoslavia and the restoration of capitalism.

The US and Germany played a decisive role in this agreement. As they played a key role in the first Yugoslav war of the 1990s, since they were the victorious powers of the “cold war” after the fall of the USSR.

Thirty years later, national issues remain unresolved and the state born out of that bloody war -with 100,000 dead, 2 million displaced, ethnic cleansing and mass killings of innocents, such as the genocide of Bosniaks in Srebrenica- is in a deadlock. Some international analysts are even considering the danger of the state falling apart.

The war in Ukraine has made the imperialist competition even more acute and this fact, in turn, gives additional impetus to the internal contradictions of the different national bourgeoisies and the conflicting nationalisms. These developments create an explosive and dangerous mixture for the peoples of the region.

The elections of October 2

The elections have highlighted the tensions and the growing instability in Bosnia and Herzegovina. Their results show that the nationalist divisions caused by the civil war of 92-95 have not disappeared and are even aggravated.

The first element that characterised the elections was that the major ethnic parties have completely politically dominated them. These are the parties referring to the three largest ethnic groups in Bosnia and Herzegovina: the catholic Croatians, the muslim Bosniaks and the orthodox Serbs.

Secondly, it is quite telling that the final results had not yet been announced a week after the elections, because of the many allegations of fraud. At the same time many feel that the electoral process was not transparent. This feeling is reinforced by the fact that the central election commission, based in Sarajevo, has requested that votes be recounted in 1,000 polling stations. A total of 91 complaints were made about serious violations of the electoral law, including calumniations, attempts to intimidate voters, attacks on observers of the electoral process, etc.

In Banja Luka, the “capital” of the Serb Republic of Bosnia, thousands of supporters of the “defeated” opposition parties demonstrated, denouncing the Bosnian Serb nationalist Milorad Dodik for fraud. Dodik is a close ally of Serbian President Aleksandar Vučić and a friend of Vladimir Putin.

Schmidt changed the election rules, and consequently the final composition of the legislative and executive bodies of the state, in the middle of an election process! The US applauded Schmidt. But Bosniaks think that these changes are only strengthening the Croats and validating the ethnic cleansing that took place against them.

At the same time, a broader democratic issue has also emerged. The High Representative is the appointee of the major Western powers and concentrates superpowers, the so-called “Bonn powers”. He is essentially the commander of a protectorate.

As the professor of constitutional law Nedim Ademović told Euronews:

“It’s not democratic to change rules pertaining to how the government is formed after the elections… That tells you a lot about the relationship that the international community has towards Bosnia. The standards that apply abroad are not respected in Bosnia,”

At the same time, those parties that refuse to identify with one of the three main ethnic groups will be underrepresented in the various state institutions.

Schmidt made this humiliating for the citizens of Bosnia and Herzegovina move, because the state institutions are becoming less and less efficient, as a consequence of the intensification of competition between the ruling classes in the region. According to the Austrian former High Representative for Bosnia and Herzegovina Wolfgang Petritsch,

“Now, 20 years on, the system is so calcified that I don’t see a possibility to change it through such interventions… Unless people realise that what is being done by the international community, it will not work,”

These developments are part of a wider crisis that has been growing in the recent period, in which the war in Ukraine plays an important role.

Serbian President Aleksandar Vučić and Bosnian Serb political leader Milorad Dodik have taken a pro-Russian stance. Serbia has refused to join the West in imposing sanctions against Russia, even if it has condemned Russia’s invasion at the UN General Assembly. The only other Western Balkan country that also refused to support the sanctions was Bosnia and Herzegovina.

Serbia is not a member of NATO, nor is Bosnia and Herzegovina, while Albania, Croatia, Montenegro and North Macedonia are. Jens Stoltenberg said in April that NATO supports Bosnia and Herzegovina’s Euro-Atlantic course, it will strive to protect it against Russian aggression and is planning a series of measures specifically for that country.

The Russian ambassador to Bosnia’s response was that any attempt by NATO to reach out to Bosnia and Herzegovina would provoke a reaction from Russia, and that

“Ukraine’s example shows what we expect.”

At the same time, Russia is threatening to block (through the UN Security Council) the renewal of the presence of a 1,100-strong European military force in Bosnia and Herzegovina. In this case, the establishment of the West is discussing sending an equivalent NATO military force, but this would provoke a reaction from Russia through Serbia and the Serb Republic of Bosnia.

In addition, as the energy crisis is raging, the Serb Republic of Bosnia is planning to build two power plants using natural gas from Russia via Serbia. However, this requires the approval of the federal institutions, namely the Croatian and Bosniak institutions. This is while the entity of the Serb Republic of Bosnia is gradually being separated from the supervision of the central government, including the joint armed forces, the border police, the judicial system and the internal revenue system.

In this landscape, nationalist far-right organisations operate openly, often with the direct support of the states of the rival sides.

For example, in the Bosnian city of Prijedor, the Serbian nationalist/pro-fascist organisations Self-Respect and Principle, together with the Serbian municipal authorities banned the annual commemoration march for the Bosniak victims in the civil war.

In previous years, May 31 was declared White Armband Day because the Serbian military forces had ordered Bosniaks to wear white armbands, on the basis of which they subsequently set up concentration camps, displaced and killed them.

This year, the Serbian municipal authorities, together with the two nationalist organisations, organised an event on May 30 called Prijedor Defence Day. Both nationalist organisations deny ethnic cleansing of Bosniaks, consider Serbian colonel-general Ratko Mladic (head of the Srebrenica massacre) a hero and have stood up for Russia and Putin in the war in Ukraine.

On the other hand, the nationalist/fascist Turkish organisation Grey Wolves has been building up cells of Bosniak muslims in Sarajevo and elsewhere for years. The Grey Wolves are openly supported by the Turkish embassy in Sarajevo and maintain close and public relations with the strongest Bosnian muslim party, the Party of Democratic Action (SDA). They recruit members from the poorer Bosniak layers through “humanitarian actions” and “support networks” for the poor.

More than 30 years since the restoration of capitalism in Yugoslavia and more than 25 years since the end of the civil war in Bosnia and Herzegovina, it is clear that the situation in the region is fragile and dangerous.

Against these dangers, the only stance that can defend peace from imperialist and nationalist competition, is the common struggle of workers, youth and poor people regardless of nationality and religion over their common problems – poverty, unemployment, environmental destruction, gender discrimination, etc. At the same time, common struggles are needed in all the Balkans to avoid our region becoming a slaughterhouse once more, like it was in the early 1990s.