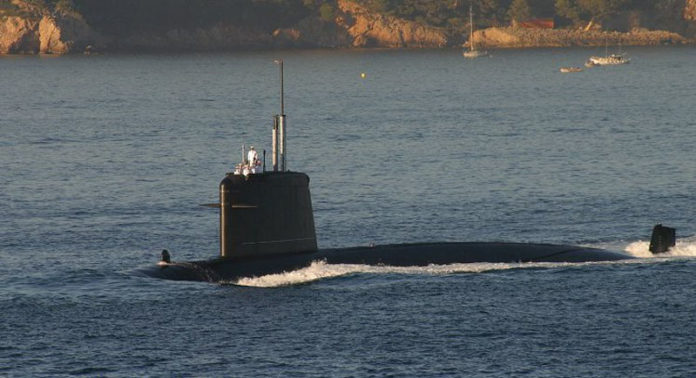 Since last Wednesday September 15, humanity has had another serious reason to worry besides the pandemic and the climate crisis. The AUKUS agreement between Australia, the UK and US marks a serious escalation in the China-US competition for world domination, reshapes geopolitical alliances internationally, and causes frictions in the relations of the big capitalist blocs. It shows how far the capitalist system and its political representatives are prepared to go: a new era of arms race with serious risks of conflicts that could even include nuclear weapons to defend their economic and geopolitical interests.

The news of the creation of AUKUS were announced at a joint press conference with Joe Biden, Boris Johnson and Scott Morrison on the evening of Wednesday 15 September. It exploded like a bombshell in the international media. It is a military alliance of the three countries that is clearly directed against China, although this was never mentioned. And the first step in this cooperation is to equip Australia with a fleet of nuclear-powered submarines, which are predominantly offensive weapons.

The announcement of the AUKUS alliance was met with anger, first of all from France, for two reasons. Firstly, it is losing a major contract (worth 56 billion euros), which was negotiated with Australia, for the supply of a fleet of conventional submarines. The US will now be in charge of supplying Australia with war material. Secondly, and perhaps more importantly, France, the only European country with a foothold in the Pacific because of its overseas territories and with a long-standing ambition to play a role in global geopolitical developments, is being thrown out of the game and coming face to face with reality: both France and the EU as a whole have lost the geopolitical weight they had, or thought they had, in the previous period and will have to be content to play the role that corresponds to their economic and military size. Indicative in this respect is the whining of France, which complained -without being able to do anything else- of a “stab in the back” from Australia and “betrayal”. They reserved even worse words for the USA: “lies”, “duplicity”, “contempt”.

In this context, France also recalled its ambassadors from Washington and Canberra and accused Boris Johnson of opportunism.

China’s reaction was also significant: seeing the clear direction of the AUKUS alliance, it spoke of “irresponsibility” and a Cold War mentality that undermines regional peace and stability.

The leaders of the three states were quick at the press conference and afterwards to contradict what the whole world understood. “This is not a precursor to a Cold War” they said, “this is not a message to China”, “we want to build a peaceful future through AUKUS”. But everybody knows that through this denial comes confirmation.

AUKUS is a major escalation in the US effort to contain China. The rivalry between the two superpowers is not limited to the economic level, it inevitably crosses over and intensifies to the military level. The arms race between the two countries has been going on for a long time (not, of course, with the same intensity and dimension that used to exist between the US and the USSR) and is concentrated in the South and East China Seas. This year for the first time the Chinese fleet surpassed the American fleet in size while in previous years China has been constantly building new bases on small islands in the South and East China Seas, expanding its dominance in the region. The nuclear submarines in Australia are among other things a response to this change of balance in the region, and an effort to try to stop China’s increasing military strength.

The reality is that US prestige has been particularly damaged in recent years following successive failures in the Middle East and, more recently, its messy withdrawal from Afghanistan. However, it is also true that the geopolitical center of conflict has now shifted, from the Middle East to the competition with China.

AUKUS essentially makes it clear that the main priority of the US is to deal with China by all means.

At the same time, the AUKUS agreement breaks the nuclear “taboo”. Since Australia is now clearly given access to nuclear weapons, the arguments against their further proliferation are in reality weakened. The US and Britain have for years played the “nuclear danger” card for Iran, North Korea and anyone else who catches their eye.  AUKUS makes a mockery of this “card” and gives the message to everyone that in the context of capitalist competition they have the “right” to use nuclear power for military purposes if they can. Already the Pacific and Indian region is full of countries that have nuclear weapons (Russia, India, Pakistan, North Korea) and already “grey areas”, disputes and military clashes have existed for years.

It is no coincidence that Theresa May, former Prime Minister of Britain and in the same party as Boris Johnson, called on the latter to answer whether this agreement “drags us into a war between the US and China over Taiwan”. Just as the Washington Post’s recent revelations about Trump and the concern in the US staff about the possibility of him using nuclear weapons against China should not be overlooked.

The dangers of AUKUS should not be underestimated. It contributes to the creation of an even more unstable, less secure and more chaotic world, opens up an era of new heightened antagonisms and new dangers for global peace, undermining global economic growth and giving rise to new racist and nationalist currents. It is another indication of where capitalism is leading the planet. The choice between socialism and barbarism becomes more relevant than ever. The need to build mass revolutionary parties of the Left to fight for the overthrow of capitalism and the building of an alternative socialist society based on workers’ democracy, is the most important task facing socialists internationally.