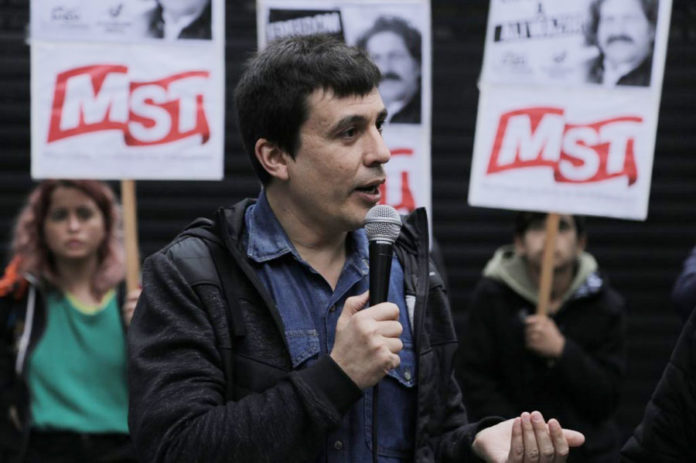 Interview with Mariano Rosa: MST and FIT-U national committee. You can read more about FIT-U here.

Q: Comrade Mariano, the IMF is imposing a new austerity program on Argentinian society. What are the main features of it?

MR: The type of agreement that the two majority bourgeois coalitions in Parliament are approving, with the support of the trade union bureaucracies and the big capital, technically responds to what the IMF calls the Extended Facility Fund (EFF).

The refinancing of Argentina’s odious debt will be done through credit from the agency itself, taking on new debt to pay off the old debt. The IMF will closely monitor the results of the economic plan stipulated in the memorandum that was signed, to ensure that the government complies with the payments of this scam. It will monitor the country´s economic policies every three months, with direct reviews of the development of the economy: a virtual co-government with the IMF. In terms of the agreement´s central points, what we have is:

Q: Last time the IMF attempted to impose a similar program was in 2001. What was the social and political impact then?

MR: Indeed, the so-called “mega-swap” of the debt in 2001, executed by Economy Minister Domingo Cavallo (who had been an official of the Central Bank under the genocidal dictatorship that nationalized private debt in 1982), accelerated all the contradictions of the ruined capitalist economy of that period. Precisely, the IMF included demands for refinancing that affected people´s incomes, including a 13% cut in the salaries of state workers and retirees, which ended up precipitating a social crisis that led to the Argentinazo of December 2001 and the resignation of 5 presidents between December 20 and January 1st, during the popular rebellion.

At the same time, we always say the same thing to those who insist that the choice is to “pay debt or the abyss”: in 2001, the eruption of the masses that caused a revolutionary crisis, imposed a sovereign non-payment for 5 years until 2006. This was one of the reasons for the “economic rebound” and the presumed “miracle” of the first years of Kirchnerism: they had the resources from the unpaid debt to finance social programs and some timid concessions to the mass movement. However, without questioning the debt in its illegitimate and illegal origin, Kirchnerism decided to pay billions of dollars in cash and constructed a false narrative of having achieved a “debt reduction,” when in reality what it carried out was an onerous surrender.

Q: What are the reactions in the working-class and the popular masses this time?

MR: The working class is processing an experience with the government in which it placed some expectations of recovering what was “lost” under the years of Macri´s right-wing government (2015-19). There is disappointment, there are disillusioned layers, and anger is growing from below. This was reflected in the mid-term elections last year with the high vote obtained by the FIT-Unity in the largest working-class districts.

The projected inflation for this year, if the economic situation does not get completely out of control, will be 60%. The salary increase guidelines set by the government and the trade union bureaucracies is 40% in gradual installments until the end of the year – this means a massive drop in real workers’ incomes.

That, in addition to the tax rises and the liquefaction of workers’ incomes, adds new elements to a highly explosive cocktail. The role of the trade union bureaucracy, which approved the agreement with the IMF, is one of containment and regimentation. Though for now there are molecular struggles, we do not rule out mass independent actions by the labor movement.

Q: What perspectives do you see as regards the class struggle in the next period?

MR: We prepare for an escalation. Already, for example, the piquetero movement approved, in a national plenary of almost 4,000 delegates (our own current participated with more than 500), mobilizations, camps and a progressive plan of struggle demanding an increase in social expenditure. The Plenary of Combative Unionism, which brings together the most advanced expressions of the Left and class-based currents in the labor movement, mobilizes against the meeting of the so-called “Salary Council,” where the trade union bureaucracy and the bosses set the minimum wage, around 200 dollars in Argentina today.

We believe that all social contradictions are amplifying, and the turn to the right of the so-called “progressives” releases forces in the mass movement. We are preparing to intervene with determination in the struggles that will tend to multiply, as the most probable hypothesis. There is no economic margin for improvements in the situation of the working class and the poor with the IMF co-governing the country.

Q: FIT-U has been seen as an example to follow by the anticapitalist left internationally. What role do you think it can play in the current conjuncture?

MR: To begin with, we celebrate the very correct policy of having convened a broad coordination of nearly 200 political, social, human rights and student organizations, which has carried out two massive actions in Plaza de Mayo and throughout the country in December of last year and this February, with 50 thousand people mobilized each time.

And during the debate of the agreement in Congress, we achieved a massive mobilization that was an undeniable characteristic of the situation on a national level. Obviously, now a new chapter begins after the agreement is approved in Congress. It now has to pass the test of the class struggle and there, the FIT-U has to reinforce an orientation of grouping the forces of the political and social Left in the streets, and become more and more an alternative political reference for millions of workers. Our proposal, as MST, is oriented towards that perspective. In the immediate term, on March 24, a new anniversary of the genocidal coup of 1976, the FIT-U will surely be the main force of an action of 70, 80 or 100 thousand people in Plaza de Mayo and all the squares of the country, focused on repudiating the agreement with the IMF and proposing the need for a general strike. The rhythm of the class struggle process and the political weakening of the ruling coalition is yet to be seen.

Q: What proposals do you think the FIT-U should make to the popular masses?

MR: In the immediate term, we explain what will come with this nefarious, neo-colonial agreement. Second, we explain that there is another way out: to ignore the fraudulent debt and prioritize the “internal” social debt, faced by the working and popular masses. To use all resources to reactivate the economy with a huge public works plan to provide jobs massively. In the face of possible or inevitable retaliations by the establishment, to take elementary defensive measures: nationalizing private banking and foreign trade; taxing the great fortunes of the country and the city; freezing prices with state and social intervention; increasing salaries, pensions and social plans.

And on a regional (Latin American) basis, we have historically raised the proposal of a Front of Debtor Countries, to be raised on a continental and international scale against the IMF and private creditors. In these terms, we propose to the FIT-U a policy oriented toward the masses. Let the capitalists, not the working people, pay for the crisis.

Q: What is the internal situation in FIT-U? What issues are being discussed internally?

MR: There is a strategic debate about the orientation and the general role in the Argentine revolution that we pose, from MST, in the FIT-U. We raised it during last year’s electoral campaign, before and after it.

We propose that this coalition, which is almost eminently electoral, evolve into a Political Movement with freedom of tendencies within it, and truly democratic mechanisms to resolve everything. Its base is the anti-capitalist and revolutionary program of the FIT-U and, at the same time, we insist on giving priority to a very bold and courageous perspective, transforming it into a tool to become a political alternative with mass influence. In this debate, we are today in the minority. We are the only ones who propose it but we are going to insist: we are convinced that such a proposal would be an extraordinary event that would bring together thousands of activists from the labor movement and the youth. On the other hand, there are debates about the Russian imperialist invasion of Ukraine: there is no common position on this central process of the world situation, and the FIT-U has not yet been able to take common action around it. A huge weakness at this point.

However, as a whole, we defend the FIT-U as an important achievement, but as a minimum from which to begin: we are not satisfied just with some parliamentary presence or with a correct conjunctural action.

That is our vision.