85 years since the Battle of Cable Street 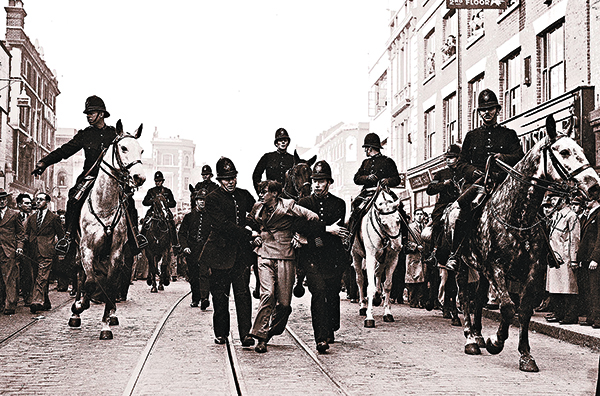 Today marks the 85th anniversary of what became known as the “Battle of Cable Street”, and is a very apt time to revisit the history and learn the vital lessons from this. Britain first, the far-right organisation have recently re-registered as a political party. Throughout much of the world we have seen both fascist and far right populist organisations emboldened and confident to act often with violence.

What became known as the Battle of Cable Street was an attempt by Oswald Mosely and his British Union of Fascists (BUF) to solidify their position by marching through the east end of London in full fascist uniform (the British fascists were known as the blackshirts). This was also a deliberate act of provocation and intimidation. It was estimated that there were 350,000 Jewish people living in Britain at the time with roughly half living in the east end of London. Yiddish was often the lingua franca in many east end communities.

This was in 1936, a time when Hitler was already in power in Germany and where it was already official policy to persecute Jews. Mussolini was in power in Italy and the Spanish Civil war was underway. It was only a few years prior to the outbreak of World War two.

At the time the Blackshirts had been gaining significant momentum. Two years prior they held a notorious rally in London Olympia with 12,000 in attendance including 2,000 in full uniform ready to attack any opposition which dared to turn up. They claimed to have 40,000 members and had the active support of the Daily Mail, a national daily newspaper.

Had they been able to successfully march through the east end of London unopposed it would have been disastrous for the Jewish community in the east end as well as many other ethnic or religious groups, and also all socialists and trade unionists.

In the lead up to the march the BUF held a series of meetings throughout the east end to whip up hatred towards the Jewish community. There was an immediate response from the community the Jewish Peoples’ Council which started a petition to ban the march, which gained over 100,000 signatures within only two days.

However, the feeling of the community and rank and file activists was not matched by the leadership. The Jewish hierarchy organised sports day events to try an ensure that Jewish youth were out of the east end on the day of the march. The Labour Party’s George Lansbury, the hero of Poplar council who was jailed for resisting cuts to the poor, wrote:

“What I want is to maintain peace and order, and I advise people who are opposed to fascism to keep away from the demonstration.”

The Communist Party leadership played an incredibly cynical role. They were in an very powerful position, having a very strong base of support and membership within the east end. Phil Piratin, who later became a CP member of parliament said:

“If Mosley decides to march, let him. Don’t attempt disorder”.

Fortunately, opposition from below grew from within the rank and file of the CP, Jewish groups and others like the Independent Labour Party. As a result, on the day of the march 300,000 emptied onto the streets to confront the blackshirts and the police who attempted to escort them. It was a real show of working-class defiance from all sections of the working class. Barricades were erected by Irish Catholic dockers around Commercial Road and Cable Street. Children were seen throwing marbles, preventing the advance of police horses, who were unable to navigate their hooves around the marbles. Chamber pots emptied overhead of the fascists, the streets erupted with Communists, trade unionists, Jews, Irish and all nationalities of all ages and genders.

It was an embarrassing defeat for Mosely and the BUF. They were forced to retreat, even with the police attempting to aid them. The working-class communities had shown that not only were they not welcomed, but they would be prevented from being there at all. The BUF never recovered from this and every time far right groups like this have attempted to march throughout Britain, the spectre of Cable Street hangs over them and they always meet resistance.

Had many particularly in the CP listened to the leadership instead of organising a united front campaign of all sections of the working class in their communities to build mass resistance to ensure the fascists could not pass, then events could had turned out very differently than they had. That is the real legacy of the heroes of Cable Street.