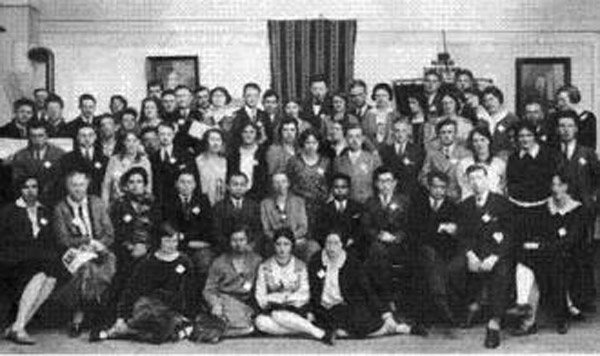 From 5 to 8 September 1915, in the village of Zimmerwald, Switzerland, an internationalist conference was held, which, though small in numbers of participants, was to play a decisive role in the course of the international labour movement.

Thirty-eight (38) delegates from socialist, social democratic and Labour parties in Europe, who disagreed with the First World War and the subordination of the “socialist” Second International to the doctrine of militarism and their support for the national bourgeoisie, met to determine their attitude towards the new reality that was taking shape.

In order to better understand the significance of this conference, it is necessary to go back a little further, and discuss the foundation and course of the Second International.

In 1889, the “Second Labour International” was founded in Paris, bringing together workers’ parties from Europe, America, Australia and Asia.

The tone, of course, was set by the European Social Democratic and Labour parties, which had started to become massive and win important numbers of seats in their countries’ parliaments. The Second International played an important role in coordinating the struggles of the labour movement of those times. By decision of its congresses, 1 May was established as World Working Class Day and 8 March as World Women’s Day.

This period was determined by the growth and expansion of world capitalism. The industrial proletariat was growing rapidly, not only in the developed countries of Western Europe, but also in countries of the then periphery, such as Russia and Japan. In this process, the Social Democratic and Labour Parties were also growing stronger and more massive, and in the case of Germany, the Social Democratic Party had emerged as the country’s leading political force.

The mass workers’ struggles, combined with the ability of capital to make concessions in a phase of economic growth, led to a significant improvement in the living standards of the working class. In a number of countries, with Germany leading the way, the 8-hour working day was introduced, trade unionism was legalised, collective bargaining was institutionalised, leading to wage increases.

In these conditions, however, an emerging layer of leaders began to enjoy a satisfactory living standard and thus cut themselves off from the rest of the working class.

This situation formed the material basis for the development of the ideology of Reformism – which rests on the idea that capitalism is working, that it brings growth and, with some adjustments, can gradually become more humane, fairer and lead to just social change.

Within the Social Democratic (SD) parties, the opinion that the capitalism of their times had important differences from the “savage” capitalism of Marx’s time began to prevail. Conclusions that the working class was able to perform gradual changes, free itself from exploitation and live in a world of equality and prosperity started having a grip. Thus, the activity of the SD parties was increasingly being confined to the parliamentary field.

These views, theoretically developed by Bernstein and other leaders of European Social Democracy, provoked heated debates within the Second International, but it was not possible for them yet to be fully grasped by the broader working classes. For the workers of Europe, the SD parties were still their parties, the parties that had enabled them to win a number of important conquests. A breakthrough was made at the start of the First World War in 1914.

World War I and treason

From the beginning of the 20th century, the parties of the Second International resisted the rise of nationalisms, and tried to put limitations to the armaments race and military preparations. This internationalist attitude was also expressed in the resolutions of the Stuttgart and Basel congresses (1907 and 1912 respectively).

Both of these congresses decided that the trade unions and parties had a duty to prevent the outbreak of a World War, and in case this was not possible, they should take advantage of the social and political crisis that such a war would generate, aiming to overthrow capitalism.

At the same time, of course, even on the question of war, differences within the parties of the Second International were beginning to become evident. Kautsky was putting forward the theory of “super-imperialism”, according to which a World War, regardless of the winner, would harm the bourgeoisie as a whole and would therefore be avoided. He argued that even if it broke out, it would end quickly, leading to a new global balance of power.

But the decisions of the Congresses were forgotten with the outbreak of World War I. In December 1914, the German Socialist Party voted in favour of war spending in the German Parliament, while the French Socialist Party and the Belgian Labour Party entered into “national unity” governments.

These parties were carried away by a general “patriotic” mood and aligned themselves with the bourgeoisie of their countries, so they de facto openly abandoned the class analysis and the principles of internationalism. This betrayal, of course, was packaged with various “leftist” arguments: for the German SD, the conquests of the German working class were threatened by Russian despotism, while for the French Socialists, German militarism had to be defeated.

This chauvinist turn of Social Democracy could not go unnoticed. The more advanced sections of the working class, having been educated in the values of internationalism, reacted. Entire parties, such as the Bolsheviks and some Balkan Socialist Parties, also reacted. But even within the mass SD parties, there were reactions, the most significant ones being those of the Spartacists in Germany, whose prominent figures were Karl Liebknecht and Rosa Luxemburg.

The processes at the Zimmerwald Conference

It was therefore in this hostile ambience that the Zimmerwald Conference was held in complete secrecy.

Within the conference, there were heated discussions and two broad trends emerged: the first one, the majority tendency, opposed the First World War and the Second International’s position, but was not determined to break away from them. They even considered that a peace initiative would save the honour of the Second International, which had suspended its activities. This tendency was opposed to the extreme version of reformism, but refused to make a deeper self-criticism of the causes that had led to the betrayal.

On the other hand, the “left wing”, led by the Russian Bolsheviks, raised the question of transforming the war from a national one to a class/revolutionary one; they also stressed the need to build new political organisations and a new international organisation of the working masses, which would fulfil its revolutionary tasks to the end.

The left wing, although a minority at the Conference, subscribed to the final declaration, which -although inadequate- was a call for action that would bring the European working class out of the paralysing state of “national unity”.

The importance of this declaration, which went against the tide of patriotic fever of the time, was confirmed by its publication being banned in Austria-Hungary, Germany, France and Russia.

Conclusions we can draw today

The Zimmerwald Conference was a source of inspiration for thousands of pioneering workers of those times and a necessary step towards the creation of the Third International, which was more solid ideologically and tighter organisationally than the Second.

It was an important step in building the international revolutionary wave that followed the First World War and led to the victory of the Russian revolution in 1917.

The developments of those years still offer valuable lessons for militants struggling to end the brutality of the capitalist system. This is especially true in our times when most of the parties of the Left have either done so, or are in the course of capitulating to the capitalist system. While the world urgently needs a way out of the multiple crises it faces, the leaders of the Left and the trade unions become more conservative and moderate. The determination and the internationalist approach of the political forces that made the Zimmerwald Conference an historic event fill our hearts and minds with the courage to continue the fight for the overthrow capitalism.