1905 revolution in Russia: “The events in Petersburg” by L. Trotsky 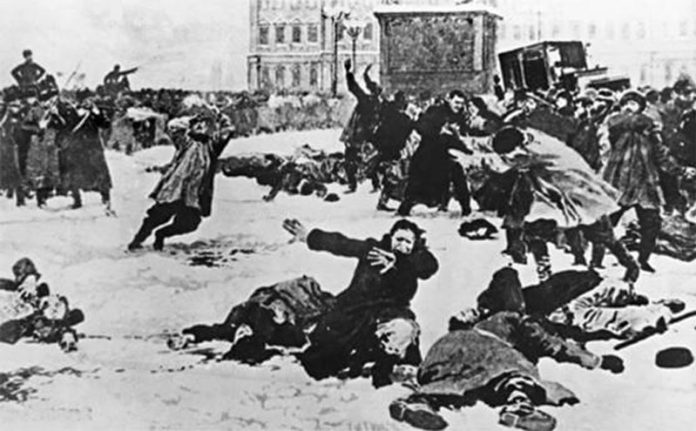 We publish below the article titled “The Events in Petersburg” , written by Leon Trotsky on January, 20, 1905, just days after the January 9 uprising. In it, Trotsky declares that “the revolutionary masses are no more a theory, they are a fact”!

The 1905 revolution represents the beginning of the revolutionary period in Russia that, through ebbs and flows, led to the victorious 1917 revolution and the establishment of a worker’s state.

In the text below Trotsky analyses important elements of the political developments flowing from “Bloody Sunday”, that have lessons for revolutionaries today.

How invincibly eloquent are facts! How utterly powerless are words!

The masses have made themselves heard! They have kindled revolutionary flames on Caucasian hill-tops; they have clashed, breast against breast, with the guards’ regiments and the Cossacks on that unforgettable day of January Ninth; they have filled the streets and squares of industrial cities with the noise and clatter of their fights …

The revolutionary masses are no more a theory, they are a fact. For the Social-Democratic Party [1] there is nothing new in this fact. We had predicted it long ago. We had seen its coming at a time when the noisy liberal banquets seemed to form a striking contrast with the political silence of the people. The revolutionary masses are a fact, was our assertion. The clever liberals shrugged their shoulders in contempt. Those gentlemen think themselves sober realists solely because they are unable to grasp the consequences of great causes, because they make it their business to be humble servants of each ephemeral political fact. They think themselves sober statesmen in spite of the fact that history mocks at their wisdom, tearing to pieces their schoolbooks, making to naught their designs, and magnificently laughing at their pompous predictions.

“There are no revolutionary people in Russia as yet”, “The Russian workingman is backward in culture, in self-respect, and (we refer primarily to the workingmen of Petersburg and Moscow) he is not yet prepared for organized social and political struggle.”

Thus Mr. Struve [2] wrote in his Osvoboshdenie [3]. He wrote it on January 7th, 1905. Two days later the proletariat of Petersburg arose.

“There are no revolutionary people in Russia as yet.” These words ought to have been engraved on the forehead of Mr. Struve were it not that Mr. Struve’s forehead already resembles a tombstone political stage and that its program and tactics would determine the future of Russia. Before this declaration had reached its readers, the wires carried into the remotest corners of the world the great message of the beginning of a National Revolution in Russia.

Yes, the Revolution has begun. We had hoped for it, we had had no doubt about it. For long years, however, it had been to us a mere deduction from our “doctrine,” which all nonentities of all political denominations had mocked at. They never believed in the revolutionary role of the proletariat, yet they believed in the power of Zemstvo [4] petitions, in Witte [5], in “blocs” combining naughts with naughts, in Svyatopolk-Mirski [6], in a stick of dynamite … There was no political superstition they did not believe in. Only the belief in the proletariat to them was a superstition.

History, however, does not question political oracles, and the revolutionary people do not need a passport from political eunuchs.

The Revolution has come, and the period of our political infancy has passed. Down to the archives went our traditional liberalism whose only resource was the belief in a lucky change of administrative figures. Its period of bloom was the stupid reign of Svyatopolk-Mirski. Its ripest fruit was the Ukase of December 12th [7]. But now, January Ninth has come and effaced the “Spring,” and has put military dictatorship in its place, and has promoted to the rank of Governor-General of Petersburg the same Trepov [8], who just before had been pulled down from the post of Moscow Chief of Police by the same liberal opposition.

That liberalism which did not care to know about the revolution, which hatched plots behind the scenes, which ignored the masses, which counted only on its diplomatic genius, has been swept away. We are done with it for the entire period of the revolution.

The liberals of the left wing will now follow the people. They will soon attempt to take the people into their own hands. The people are a power. One must master them. But they are, too, a revolutionary power. One, therefore, must tame them. This is, evidently, the future tactics of the Osvoboshdenie group. Our fight for a revolution, our preparatory work for the revolution must also be our merciless fight against liberalism for influence over the masses, for a leading role in the revolution. In this fight we shall be supported by a great power, the very logic of the revolution!

The Revolution has come.

The forms taken by the uprising of January 9th could not have been foreseen. A revolutionary priest, in perplexing manner placed by history at the head of the working masses for several days, lent the events the stamp of his personality, his conceptions, his rank. This form may mislead many an observer as to the real substance of the events. The actual meaning of the events, however, is just that which Social-Democracy foresaw. The central figure is the Proletariat. The workingmen start a strike, they unite, they formulate political demands, they walk out into the streets, they win the enthusiastic sympathy of the entire population, they engage in battles with the army … The hero, Gapon [9], has not created the revolutionary energy of the Petersburg workingmen, he only unloosed it. He found thousands of thinking workingmen and tens of thousands of others in a state of political agitation. He formed a plan which united all those masses – for the period of one day. The masses went to speak to the Tzar. They were faced by Ulans, Cossacks, guards. Gapon’s plan had not prepared the workingmen for that. What was the result? They seized arms wherever they could, they built barricades … They fought, though, apparently, they went to beg for mercy. This shows that they went not to beg, but to demand.

The proletariat has arisen. It has chosen an incidental pretext and a casual leader – a self-sacrificing priest. That seemed enough to start with. It was not enough to win.

Victory demands not a romantic method based on an illusory plan, but revolutionary tactics. A simultaneous action of the proletariat of all Russia must be prepared. This is the first condition. No local demonstration has a serious political significance any longer. After the Petersburg uprising, only an all-Russian uprising should take place. Scattered outbursts would only consume the precious revolutionary energy with no results. Wherever spontaneous outbursts occur, as a late echo of the Petersburg uprising, they must be made use of to revolutionize and to solidify the masses, to popularize among them the idea of an all-Russian uprising as a task of the approaching months, perhaps only weeks.

This is not the place to discuss the technique of a popular uprising. The questions of revolutionary technique can be solved only in a practical way, under the live pressure of struggle and under constant communication with the active members of the Party. There is no doubt, however, that the technical problems of organizing a popular uprising assume at present tremendous importance. Those problems demand the collective attention of the Party.

The events of January 9th have given us a revolutionary beginning. We must never fall below this. We must make this our starting point in moving the revolution forward. We must imbue our work of propaganda and organization with the political ideas and revolutionary aspirations of the uprising of the Petersburg workers.

The Russian revolution has approached its climax – a national uprising. The organization of this uprising, which would determine the fate of the entire revolution, becomes the day’s task for our Party.

No one can accomplish it, but we. Priest Gapon could appear only once. He cherished extraordinary illusions, that is why he could do what he has done. Yet he could remain at the head of the masses for a brief period only. The memory of George Gapon will always be dear to the revolutionary proletariat. Yet his memory will be that of a hero who opened the sluices of the revolutionary torrent. Should a new figure step to the front now, equal to Gapon in energy, revolutionary enthusiasm and power of political illusions, his arrival would be too late. What was great in George Gapon may now look ridiculous. There is no room for a second George Gapon, as the thing now needed is not an illusion, but clear revolutionary thinking, a decisive plan of action, a flexible revolutionary organization which would be able to give the masses a slogan, to lead them into the field of battle, to launch an attack all along the line and bring the revolution to a victorious conclusion.

Our Party has committed many errors, blunders, almost crimes. It wavered, evaded, hesitated, it showed inertia and lack of pluck. At times it hampered the revolutionary movement.

However, there is no revolutionary party but the Social-Democratic Party!

Our organizations are imperfect. Our connections with the masses are insufficient. Our technique is primitive.

Yet, there is no party connected with the masses but the Social-Democratic Party!

Let us exert all our power, comrades! Let us put all our energy and all our passion into this. Let us not forget for a moment the great responsibility vested in our Party: a responsibility before the Russian Revolution and in the sight of International Socialism.

The proletariat of the entire world looks to us with expectation. Broad vistas are being opened for humanity by a victorious Russian revolution. Comrades, let us do our duty!

Let us close our ranks, comrades! Let us unite, and unite the masses! Let us prepare, and prepare the masses for the day of decisive actions! Let us overlook nothing. Let us leave no power unused for the Cause.

Brave, honest, harmoniously united, we shall march forward, linked by unbreakable bonds, brothers in the Revolution!

[1] Before the revolution, the revolutionaries and other trends were organized in the Russian Social Democratic Labour Party, and thus were reffered to as Social-Democrats. The RSDLP was renamed as Communist Party at 1918. Consequently, Social Democratic as a term was used to represent the reformist forces of the Second International.

[2] Peter Struve was initially a Marxist, then a liberal and after the revolution he joined the reaction of the White Movement against USSR.

[4] Local governments set up by the Czar as a pretext of “liberalization” of the autocratic system.

[5] Sergius Witte was a Minister of Finance in the closing years of the 19th Century and up to the revolution of 1905, and was known as a liberal bureaucrat.

[6] A family of Russian and Polish nobility that originated from present-day northwestern Belarus.

[7] The Ukase of December 12th, 1905, was an answer of the government to the persistent political demands of the “Spring” time. The Ukase promised a number of insignificant bureaucratic reforms, not even mentioning a popular representation and threatening increased punishments for “disturbances of peace and order.”

[8] Trepov was one of the most hated bureaucrats, a devoted pupil of Von Plehve’s in the work of drowning revolutionary movements in blood.

[9] George Gapon was the priest who organized the march of January 9th. Trotsky’s admiration for the heroism of Gapon was originally shared by many revolutionists. Later it became known that Gapon played a dubious role as a friend of labor, and an agent of the government.